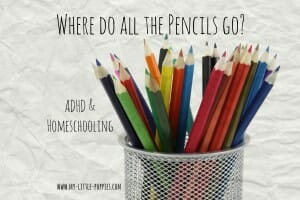 Where, pray tell, do all the pencils go? How much do you want to bet they’re hanging out with all the socks?!

I’ve told you guys that Leo is a tornado full of boy. You’ve seen what his room looks like. I’ve explained his sensory “stuff” and how, sometimes, even his clothing looks as if a tornado has blown through. But, have I told you how he loses everything? He loses EVERYTHING. Last year, when he was in public school, his lost articles of clothing inspired a school-wide “Lost and Found” on Instagram. I’m not kidding. Last winter we had close to four feet of snow in our yard and – I kid you not – Leo interrupted my shoveling by tearfully announcing he’d misplaced a sock. He lost a sock from within his boot in FOUR FEET of snow! At first, I didn’t believe him. It’s not at all unlike him to head out of the house without a sock, or even shoes. He persisted, as he tends to do, and I ended up looking for the wayward sock. Low and behold, I found that sock and it was nowhere near where he had been playing. He probably lost it early on in his snow play and then at some point, for some unknown reason, realized it was missing and threw a fit. This child loses everything.
Follow My Little Poppies’s board gifted and twice exceptional on Pinterest.


When we made the decision to homeschool, I purchased pencils, pens, and some pencil sharpeners. They started disappearing rapidly and so I hid a stash for emergencies. Folks, my emergency supplies are now depleted. I cannot find a pencil, let alone a pencil with a tip, anywhere.

This morning, when we sat down to do a little homeschoolin’, Leo had this in his hand: 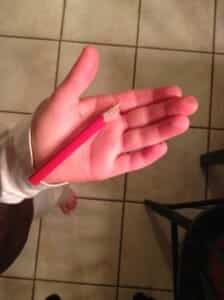 Seriously? That’s the best he could do? It looks like a little red golf pencil.

He claimed this was the only pencil he could find in the house that had a tip. And he was being generous, calling what the little red one had a tip. I told him there had to be another pencil in the house.

We went on a search.

We started in the junk drawer: empty. We checked the markers, crayons, and colored pencils where we managed to unearth a few sad and tip-less pencils. We checked all bedrooms, even Leo’s room. Again, we found a bunch of sad, tip-less pencils. I turned the house upside down and ended up with maybe eight, and those eight are pathetic.

Where do all the pencils go??

Folks, I am turning to the village. I am an organized person who was blessed with a tornado full of boy. I know the universe is laughing right now. Executive functioning is probably never going to be one of his strengths, and I am going to exercise mass quantities of patience. I need tips. I need hacks, folks. I told you about my laundry hack, and my gingerbread hack. I have a friend who recently replaced all of her kids’ socks with plain black socks. Why? No odd pairs and no clean yet filthy-looking soles. Genius! I need hacks like that, but for homeschool moms of ADHD kids. This morning I read a fantastic homeschool tip from Amongst Lovely Things involving the use of spiral notebooks for assignments. Again, genius! I adopted that tip this morning because do you want to know what? He loses the notes I make for him. I’m considering attaching the notebook to something large (à la middle school bathroom hall pass) because I’m not convinced he won’t also lose the notebook, but it’s a fantastic idea and worked well today. What homeschooling hacks do you have for me? What helps to save your sanity when you are homeschooling an ADHD kiddo? Please, please share here!

All that is gold does not glitter,

Not all those who wander are lost;

The old that is strong does not wither,

Deep roots are not reached by the frost.