In honor of Valentine’s Day, I am sharing a post that I wrote last year, when my children were 6-, 5-, and 3-years-old. It’s about Valentine’s Day and giftedness and parenting and judgment. 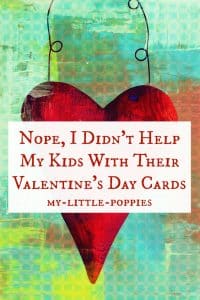 When Leo was 3-years-old and in his first year of preschool, we sat down to make Valentine’s Day cards for his classmates. I don’t go all Pinterest-crazy when it comes to Valentine’s, folks. Every year I purchase card stock, cut out large hearts, and then let the kids have at them. We call it a Valentine’s-palooza. My kids’ Valentine’s Day cards may not be the prettiest, but my little poppies have a blast making them.

That very first Valentine’s-palooza year, when Leo was three, I cut out the card stock hearts and wrote To:____ From: Leo on each of them, following his class list. And do you know what Leo proceeded to do? On each heart, Leo painstakingly copied both the name of his friend and then signed his own before adding drawings, stamps, stickers, and whatever else.

Of course, he was already writing at that point. In fact, he wrote an entire book series featuring a character called The Goofy Lion when he was 3-years-old. He’s always loved the written word. But, other people didn’t know about his writing because when your 2-, 3-, and 4-year-old is writing (or reading) independently and prolifically, you just can’t talk about it. 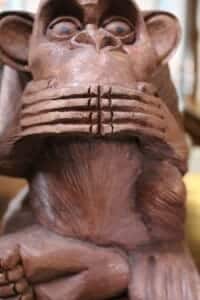 In all honesty, when Leo was 3- and 4-years-old, I was barely keeping up with him. Those were our most challenging years to date. We didn’t have a name for any of this stuff yet and every single day was a struggle. His behavior during those years left Schizz and I both embarrassed and exhausted. Had I wanted to hothouse him, I wouldn’t have had the time, nor the energy, nor the patience. Still, I worried that others would view that stack of Valentine’s Day cards as a boast, and think of me as a tiger mom.

I was more worried about what other people would think about the silly cards that I couldn’t have been totally present in that moment. I’m sure, knowing Leo, he was having a blast during that palooza while I was sitting there, cutting out hearts and fretting. Isn’t that sad?

When it came time for Valentine’s Day the following year, 4-year-old Leo pleaded with me to cut out the hearts but leave all the writing to him. By that point, I was beyond worrying about whether people would think I was hothousing or not, as I had already had two parents ask me “what reading program” I was using at home. When I would explain, sheepishly, that he just woke up from his nap one day and read a book to me, I received blank stares. It was clear, more than ever before, that you just can’t talk about this stuff.

And then T entered preschool and Valentine’s Day rolled around. I cut out her hearts, and wrote To:____ From: T on each and left them for her to decorate. Wouldn’t you know she copied every kid’s name and wrote her own before decorating them all? And I smiled. It made me think of that first time, with Leo, and how far we had come. And I found it adorable that the two had the same approach to Valentine’s Day. But, once again, I didn’t talk about it.

I set up what we call our “Valentine’s-palooza” yesterday, much earlier than usual because we are soon going to have a gigantic hole in our house. I cut out all the hearts that I would need for both T’s 4-year-old preschool class and Seuss’ 3-year-old class. Each time I cut out a heart, T would take it from me and fill it out independently, working from her class list which she is now able to read without assistance. Meanwhile, I would write To: ____ From: Seuss on each of Seuss’ cards and then pass them to him for decorating. And, guess what? Seuss copied all the names and signed his own before he would start decorating.

Here we go again, for the third time. And do you want to know what? This time, it made me smile and think of how far we’ve come, but something is different this time: I no longer care if people think we’re hothousing.  Honestly. Those who know us in real life know that I’m not a tiger mom. Those who don’t? They are going to think what they want to think whether I worry about it or not. These are my kids and they were born this way.

This time, I’m talking about it.

I think it’s a shame that we can talk about our children’s athletic prowess but if someone spies your child reading Harry Potter in Kindergarten, you are viewed as a hothousing braggart. 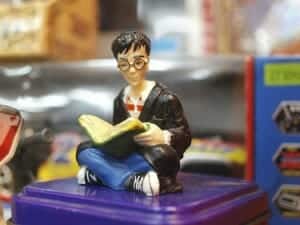 Our family is a family of book lovers and, yes, we read multiple books daily. But we do a lot of other things, too. We spend a great deal of time outdoors, in nature. We play games and make art and my kids are involved in various extra-curricular activities such as dance, gymnastics, music, soccer, Destination Imagination, and art. But, do you know what? They love to read and write and I think it’s okay to talk about that, too! I have three kids who were writing at two and a half, and two kids who were reading before their fifth birthdays. I have a three-year-old who is reading some words already. It is what it is, folks, and do you want to know what else? I think it’s pretty darn cool. I’m determined to worry less this third time around and enjoy it all more.

I started this blog on a whim, to connect with others who are on a similar path. I’m not here to brag about my children but I am here to support them and others like them. I want to follow their lead and enjoy the little moments and rejoice in their triumphs. And if that triumph is reading or writing-related, so be it.

So, this year, this third time around, I’m talking about it. And I’m even going to show you a few triumphs that made me smile this week: 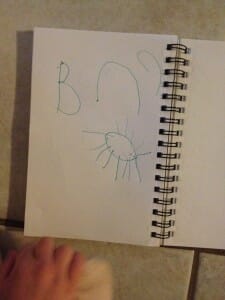 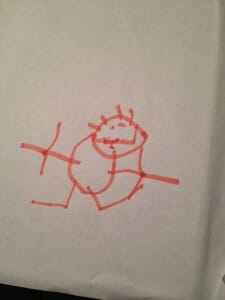 Seuss’ latest self-portrait. He recently went from those cute little people with the legs coming out of their head to a person with a body, hair, feet, and fingers. 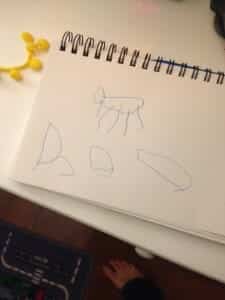 This is our beloved DOG, Finnegan.

Tell me… what have you been afraid to share before? Have you been accused of hothousing? Do you wish you could share interesting things that your kids are doing without judgment?

Feel free to share here- publicly or anonymously I promise I’ll rejoice in the triumphs with you.

To be yourself in a world that is constantly trying to make you something else is the greatest accomplishment.