The Lost Art of Play

I recently had two separate doctor appointments, with kids in tow of course, and I ended up having essentially the same conversation one week apart. It was sort of surreal and I thought I’d write a little post about it to see what you all think.

Here’s how it went down…

Appointment number one was first thing in the morning and my children hadn’t had a chance to run in the yard or to play yet, so the energy level was high. And they were a bit on the loud side. Fortunately, we were the only ones in the waiting room. T had brought Linda to the appointment and Leo also had a baby doll with him. Seuss had opted for the Marvel Encyclopedia. The three were lost in a little world of babies and monsters and superheroes.

My children do this often. They make up a game, or a scenario, and they play it out… often loudly. This day was no different. They were In It. They were so In It that if you were to say one of their names you would not get an answer. They were somewhere else, far away, in the world of imagination.

And I was doing what I usually do in these situations: I was reading my book. And I was In It. I was so in it that if you called my name, I would not hear you.

When the nurse called my name, for the second time, I stood up and had to tap each of them on their little shoulders to get their attention so that they would know to follow me.

The nurse smiled and said, “Wow. They were playing, like the good old days. It’s like a lost art!”

It was too chaotic to carry on the conversation, but I thought to myself how sad if this type of play, the play I enjoyed as a young child, is becoming a lost art.

And then I had to don a johnny and deal with a sibling squabble, a fat lip, a stubbed toe, and a three-year-old bathroom emergency so I thought nothing more about it until… 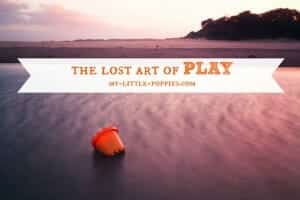 One week later, I found myself at another doctor appointment. Again, it was early morning and my kids were hyped up. This time, the waiting room had toys: three large stuffed bears, a rocking horse, a yoga ball, and a doll house. They were playing Baby, a game that I absolutely can’t stand. Baby is quite elaborate and my children love to play it together but it requires the use of The Baby Voice. Folks, I loathe The Baby Voice. It’s like nails on a chalkboard to me. Actually, it’s worse than nails on a chalkboard. It’s equivalent to squeaky balloon finger noises or gross mouth noises. (Okay, yes. I am fully aware that I have my own auditory sensitivity. This is why I am constantly pining for those Bose noise-reducing headphones!) Schizz always says I should accept Baby because our children are always so happy when they are playing it. During Baby, there is no fighting, no yelling, no drama. And I love that they have created a game and made memories that they will remember forever, I do. I just wish it didn’t involve The Baby Voice because I HATE IT.

So there I am, sitting in the waiting room, reading my book, and trying extremely hard to ignore The Baby Voice, when the doctor calls my name.

I smile and turn toward her and I can see that she’s smiling too, but she’s watching my children playing Baby.

There it was again!  It felt surreal to have the same conversation, in a different place, with a different person. Was it just a weird fluke in this universe, or is it something more?

Is play becoming a lost art?

I’d love to hear from you guys. Do you think play is becoming a lost art? Do you think children are too overscheduled? Are they lacking that wonderful space between? Share your thoughts here. I love hearing from you!

This post has been part of the September 2015 Play Matters Blog Hop. Please click the image below to keep on hoppin’! 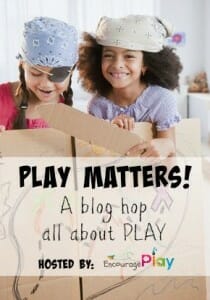 Girls dressing up as pirates