Do you guys have a least favorite day of the week? My least favorite day is Tuesday, more specifically: Tuesday evening. Tuesday evenings leave me feeling over-scheduled and frazzled, and I did it to myself, folks. In an attempt to make my life easier and less taxi-ish, I scheduled overlapping classes for T and Leo on Tuesday nights. The class times are perfectly staggered so that I should be able to get everyone where they need to be with time to spare.

In reality, however, things do not go smoothly. It looks more like this: I tell the kids to get ready for dance and gymnastics. My sweet T goes straight upstairs, gets dressed, gathers all dance necessities, and is back in my kitchen ready to go in about six minutes. 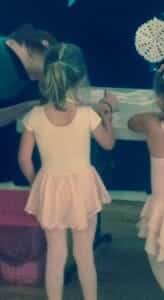 Seuss is not his most cooperative self when evening rolls around, so he’s usually involved in some sort of monkey business and requires wrangling. 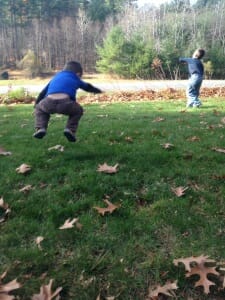 Welcome to the Danger Zone!

Leo? Leo whines. Leo, who needs gymnastics because of this, this, and this, and who has been going to gymnastics for years always whines that he doesn’t want to go. He needs multiple reminders to get dressed appropriately for class, and then he needs reminders to grab a coat and put on shoes. It was 31 degrees here when we were leaving for gymnastics this afternoon and I kid you not- I was backing out of the garage when he yelled, “OOPS! I forgot my shoes again!!” Sigh. Leo then continues to whine the entire five minute drive to dance. When we get out of the car to drop T off, he refuses to wear his winter jacket and waltzes out of the car in a short sleeved shirt and shorts (thankfully, with shoes). T happily enters the dance studio, removes her layers, packs them in her dance bag, and puts on her tap shoes. Unassisted. Meanwhile, danger monster -or whatever the character of the week it happens to be- wreaks havoc in the waiting area in front of horrified ballerinas. And Leo continues to torture everyone with more whining. Corralling two uncooperative boys back into the car and to gymnastics takes much longer than it should. 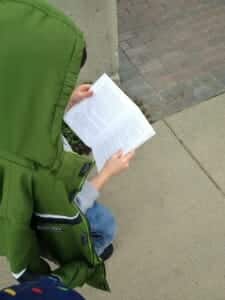 This was Leo outside the library earlier today, when it was 28 degrees: “I don’t care if it’s 28 degrees! I HATE COATS!”

When we finally make it to this gymnastics place, it’s like the seventh circle of hell. Folks, I don’t know if all gymnastics places are like this or not but ours is crowded, and hot, and smelly. This place must be goldmine because it has not been updated in at least twenty-five years and yet everyone and their mother is packed like sardines in the super-small lobby on Tuesday nights. And Leo? Complaining, whining, uncooperative Leo? He opens the door to gymnastics, deeply inhales the stinky smell, and exclaims, “I just love it here! I love the smell!!” He says the exact same thing every Tuesday night. Um, what? Why must we battle to get here if he loves it so much that he even loves its stink?? And when I pick Leo up from gymnastics? He comes out smiling and immediately asks, “When do I get to go to gymnastics again???” and then when I tell him he has to wait until the following Tuesday? Yup, you guessed it: whining all the way home.

Well, tonight was a little bit different. Yes, there was plenty of straggling and whining and shenanigans, but when we pulled into the overflowing gymnastics parking lot, dodging pedestrians, I had to stop to let a raccoon pass in front of my car. Let’s just say that this raccoon had seen better days. It was moving slowly and at an odd angle, and it stopped in the glare of my headlights to do a few slow circles before continuing on, right toward the entrance of gymnastics. Clearly he was very ill because, as I said, it’s the seventh circle of hell on Tuesday nights and you don’t set foot near that door unless you’re a sucker -like me- and actually paid to be there. 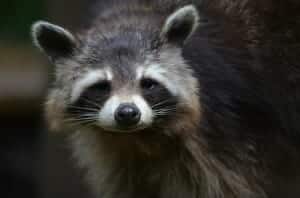 “Look! Mum! That raccoon is DANCING!” shouted Seuss. “Mum! Do you think it’s Chester Raccoon??” and, with this, he dissolved into a fit of giggles. 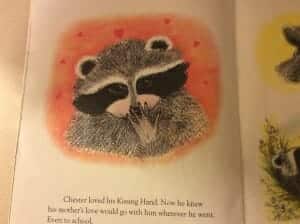 THIS is Chester Raccoon from the book The Kissing Hand. Gymnastics Raccoon was decidedly NOT Chester.

This ruckus caused Leo to look up from the book he was struggling to read in the dark. It took a millisecond for him to assess the situation.

“OH NO! THAT RACOON IS BEHAVING ABNORMALLY! I THINK HE MIGHT BE RABID!! I’VE READ ABOUT THIS AND IT IS NOT GOOD!! RABIES IS NOT GOOD AT ALL!!”

I tried -unsuccessfully- to shush him while also attempting to warn oncoming gymnasts about the large raccoon doing figure eights in their path. Meanwhile….

“CAN YOU SEE HIS MOUTH, MUM? IS HE DROOLING?? IS HE FOAMING AT THE MOUTH?!?! CAN YOU SEE? THIS IS THE WORST GYMNASTICS EVER! I’M NEVER GOING TO WANT TO COME HERE EVER AGAIN!!’

I adore nature and I would rather be outside than indoors, but this… this was BAD NATURE. We did eventually witness Gymnastics Raccoon stagger far enough away from the entrance so that we were able to gain entry. Leo professed his love of both gymnastics and the smell of gymnastics, as he always does, while I gave a heads-up about Chester to the desk clerk. When I picked Leo up later, he was smiling and, predictably, he asked how long it would be until his next class. When I told him that he’d have to wait a week, he replied, “Oh, good. Because I’m already worried about that raccoon coming back.”

My Tuesdays just got trickier. Thanks a lot, Chester.

Adopt the pace of nature: her secret is patience.