Taking three young children to the dentist is certainly not the most enjoyable way to spend your day, especially when your children are worn out from being sick and when the appointment is scheduled smack in the middle of what is normally your designated (and much-needed)  quiet time. But all parents know how tricky it is to schedule a dentist appointment for three children on the same day so you grin and bear it. And maybe you schedule an emergency sushi date with a dear friend for a long overdue night out as a reward. Or maybe that’s just what I do…

Folks, we’ve come a long way in the dentist-department. I’ve mentioned that one of our children is a PG, 2E, full of OE little guy who has some sensory “stuff” going on. I used to have to schedule his appointments separate from everyone else’s, hire a sitter for the event, and then white knuckle my way through the appointment. 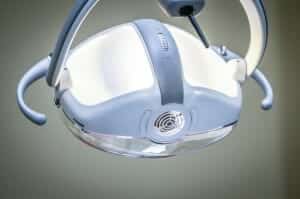 No one loves this thing in their face, am I right?

And I get it, I really do. The dentist office is a complete sensory overload. The lights are glaring, it smells funny, there are oodles of weird noises, you are required to sit still, people have their hands in your mouth, and there are odd tastes and textures. Basically, a dental appointment is an assault on all of your senses at the same time. It is not surprising that a young child with SPD would have difficulty at the dentist.

Today was our first triple dentist appointment at a new office, so I knew it was a gamble. I switched the kids over to my dentist for convenience sake. Things have grown so much better in the dental department for us that they were ready to graduate from the pediatric dental facility with all the bells and whistles which was a sensory overload for me. Sometimes the proverbial apple does not fall far from its tree.

I knew the newness of the place might result in a two-steps-forward-three-steps-back sort of thing. When we first arrived, the three kids sat patiently together, huddled around my iPad- a rare treat for them. I even received a compliment from the sweetest elderly woman about how well my children were behaving (cue choir of angels singing!). I relished that moment, of seeing my children through her eyes in all their well-behaved glory- because I knew we were minutes from a possible under-arming moment.


I could see it in his eyes, too. I saw how they darted around the room, as if looking for an escape route. I could see it in his posture, the way he suddenly ramped up the ever-present fidgeting. And then came the questioning, the onslaught of eighty gazillion anxiety-fueled questions. From these questions I was able to discern two distinct and separate dental concerns:

1. Brusher’s regret. Leo confessed that he does not always brush his teeth for two minutes. Sometimes he sneaks and doesn’t brush them at all, and he may miss certain teeth some nights.  If I get a cavity, will they drill me today?

2. Fluoride* paint. Leo remembered that the dentist visit before last he received what he refers to as “fluoride paint” (fluoride treatment painted on his teeth). It tasted funny and it felt funny and he threw an epic tantrum after it was applied and I let him brush it off when we got home to save my sanity. Will they paint that nasty stuff on my teeth? Will you let me BRUSH IT OFF?

We discussed his concerns until the hygienist appeared in the waiting room and called his name. I braced myself and prepared for battle but instead of throwing the anticipated epic tantrum, he did this (still embarrassing but much improved) whining thing. I was able to give him the parental stink eye and he slithered off his chair and reluctantly followed the hygienist into the exam room. Stink eye only, folks! Of course, he continued with the nonstop questioning, even when hands were in his mouth, throughout the appointment and whenever possible, he made eye contact with me and made his best Eeyore face. He perked up when he heard the dentist exclaim, “No cavities!” and he had a huge smile when presented with his prize bag, because what collector doesn’t love a prize bag?

It was another success in a string of successes lately. To another family, this appointment would have been dreadful but for us it was a victory. Baby steps in the right direction.

As soon as we got in the car, he started up about the fluoride on his teeth and how it tasted weird and had a positively unbearable fuzziness. As we were backing out of our parking space, I blabbered on about why dental visits are important and how fluoride helps tooth longevity. I just babbled something, to settle him down.

“Well,” he declared at top volume, “GEORGE WASHINGTON didn’t have teeth. He had fake ones. They were made of wood. And I’d say HE did an okay job without the fluoride paint. First President and all that stuff.” 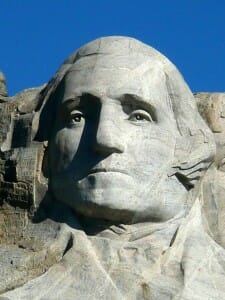 Tell me… do your kids have trouble at the dentist? Do you rejoice in small victories? Share your stories here!

*Folks, I do not want to get into a debate on the pros and cons of fluoride use. I’ve read all the stuff, too. My kids get the fluoride paint on their teeth once a year. My kids = my choice. I only included this for the George Washington bit anyway.

Trips to the dentist. I like to postpone that kind of thing.