For the past several months, I have been gushing about our family’s new favorite math program: Smartick Math. I have recommended the program to countless friends and family members, Kara and I have chatted about our mutual love for the program on The Homeschool Sisters Podcast, and I’ve mentioned the program on Simple Homeschool.

Well, I’m about to do it again.

I often refer to Smartick as math dessert.

Yes, you read that correctly. I used the words math and dessert in the same sentence.

My Kids Have Fallen Head Over Heels for Smartick Math 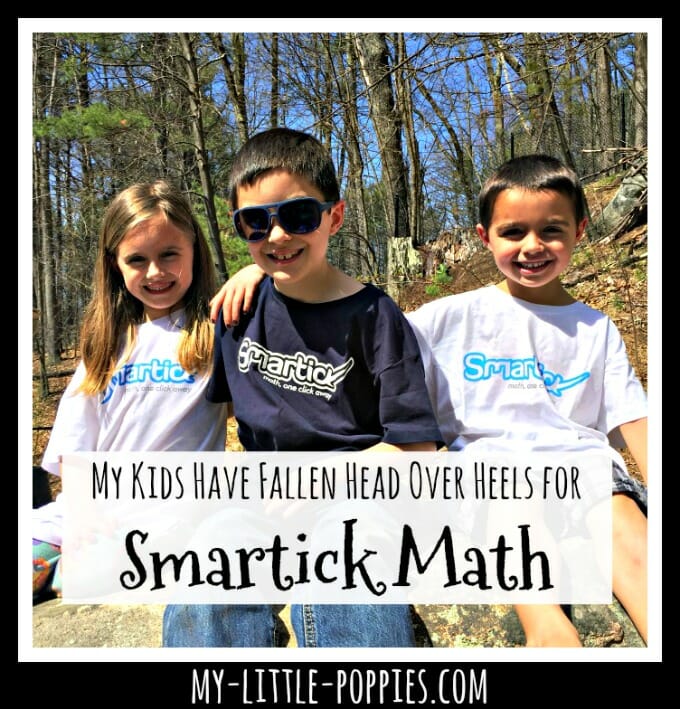 *Disclosure: I received access to Smartick in exchange for a review. I was not required to write a positive review and, as always, all thoughts and opinions are my own. I only choose to share resources that I would use with my own family and those that I believe other families will enjoy. My children *love* Smartick!

Here’s the back story…

Just before the holidays, I was contacted by Smartick about the possibility of doing a review. I’ll be honest here and tell you that I had never heard of Smartick, nor was I particularly interested in taking on more work with Christmas on the horizon.

As I read the e-mail I realized three things:

I decided to go for it. I set up a Smartick account for each child that afternoon. It was simple and the kids were “playing Smartick” within minutes.

My children love to “play” Smartick. They are playing math.

Since December, “playing” Smartick has been a daily event. It has yet to feel like work. My kids have played Smartick on Christmas Eve, Christmas Day, the day after Christmas, birthdays, and – most recently- on vacation.

Here is a photo of my boys, just the other day, playing Smartick while on vacation: 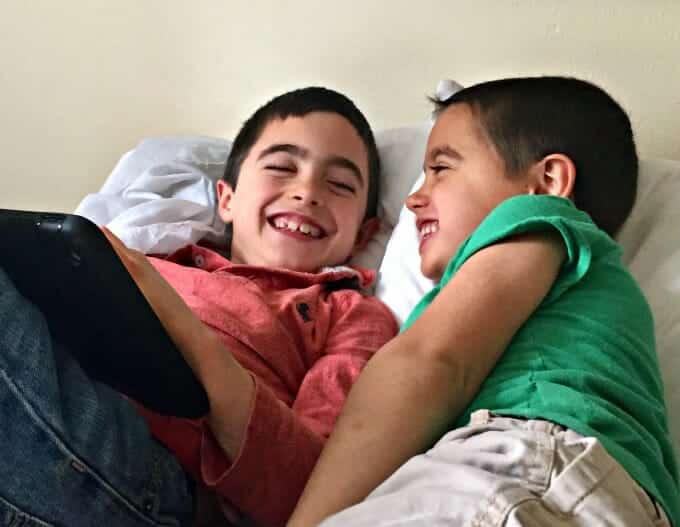 Do you see the joy? They make the same faces when they eat cake. Except they are working on math. Smartick is, for my kiddos, math dessert.

Smartick is also a source of connection. 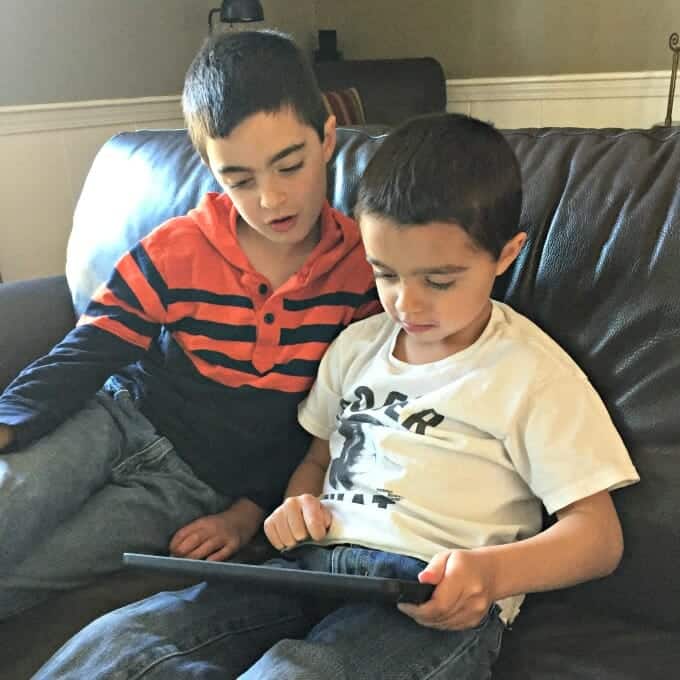 My children chat about Smartick throughout the day. It’s their thing. Smartick is something special that they all share. They inquire about each other’s “tick” levels, chat about the latest tutorial, devise silly questions to drop into the Well of Ideas, debate whether Sinous is easier to play on a desktop or an iPad, send each other owls and fuzzy slippers as gifts, and compliment each other’s room decor…

(Did I just lose you there? Don’t worry- I’ll get to all of this in a minute.)

My point here is this: Smartick has been an unexpected, wonderful, and fun addition to our homeschool routine.

Do you want to add more awesome math resources to your homeschool day?

What is The Smartick Method?

Smartick is an online math program for children ages 4-14. New to the U.S., Smartick is supported by the European Union and is used in 52 countries worldwide. You can access Smartick from your desktop, phone, iPad, etc.

The Smartick Method utilizes Artificial Intelligence (AI) to meet your child’s unique strengths and weaknesses. It doesn’t matter whether your child is performing below grade level, above grade level, or somewhere in between… Smartick adjusts to your child.

Do you know what I love about that last bit? Smartick is meeting your child’s unique needs. Smartick does not follow Common Core or state standards. Smartick follows your child. In many cases, this allows your child to go beyond the classroom. Smartick reports that 94% of their students see an improvement in grades.

Smartick is easy to implement. The Smartick Method uses a 15-minutes a day approach. These daily lessons work on mental calculation, algebra skills, logic, and more.

These short daily sessions help to:

In order to experience the benefits of the program, it is recommended that children complete daily 10-15 minute sessions at least five days per week. (You might be surprised and they might ask you to play Smartick on Christmas Eve. Ask me how I know!)

Each daily session begins with a check-in… 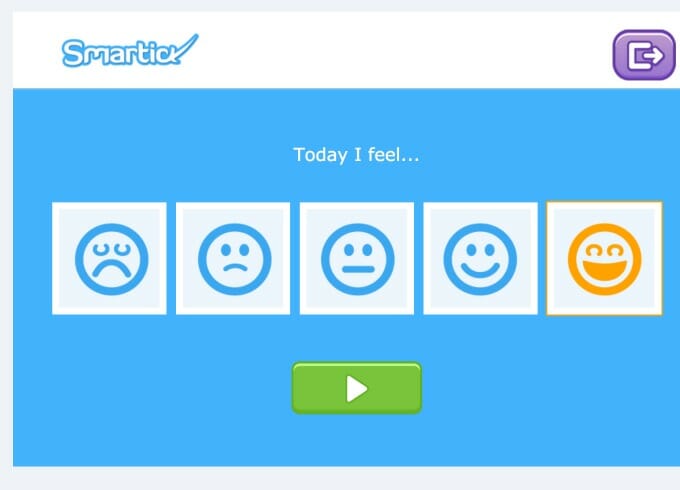 … and ends with feedback about the session’s difficulty: 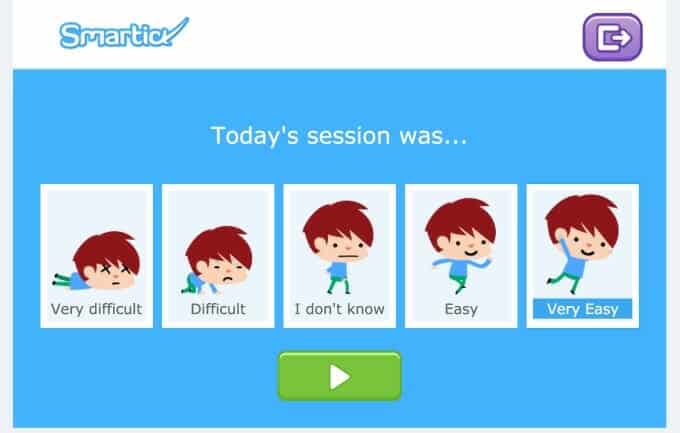 I love that Smartick is individualized to each child, and that it is fun and engaging. It is rare that we miss a session because my children wake up asking to play.

It’s no secret that we are a family of game lovers. Smartick works well for our family because it incorporates games and play.

As children complete Smartick’s daily 15-minute sessions, they earn “ticks.” Ticks are the currency of Smartick. 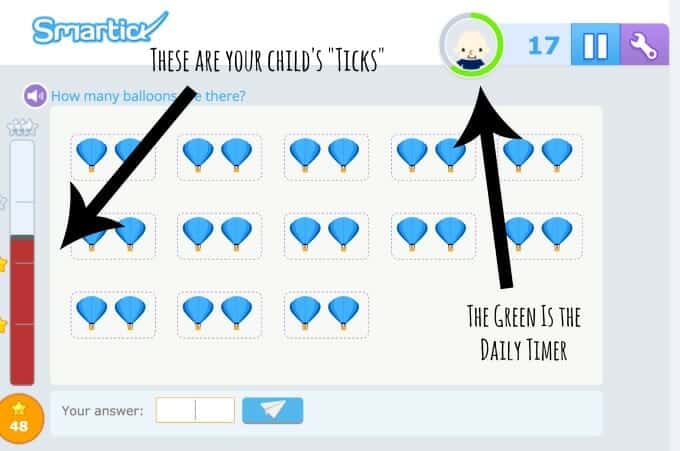 A child earns ticks by: 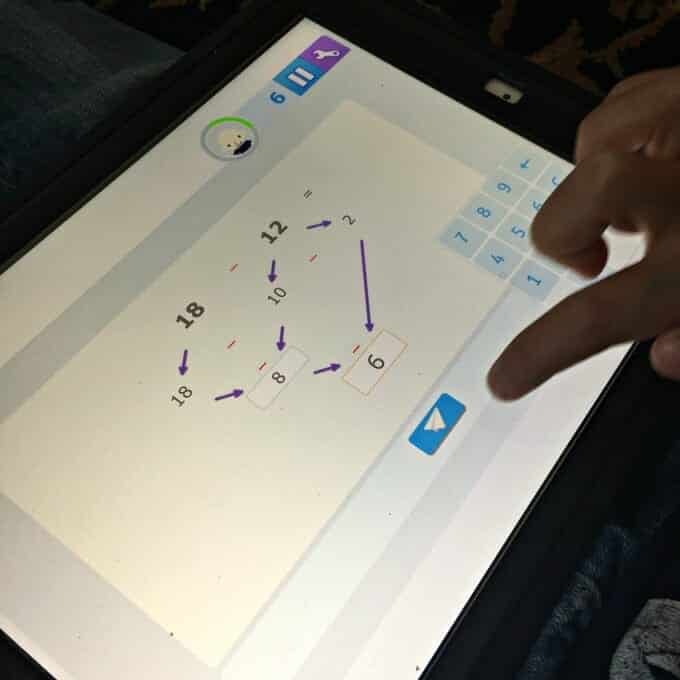 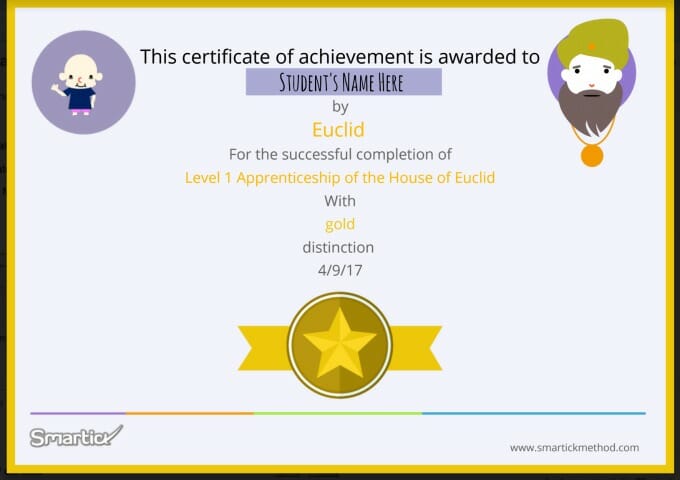 Once a child’s daily 15-minute session is complete, the child is free to explore Smartick’s virtual world. The virtual world includes the child’s house, a treehouse, a store, a school, the well of ideas, and more. 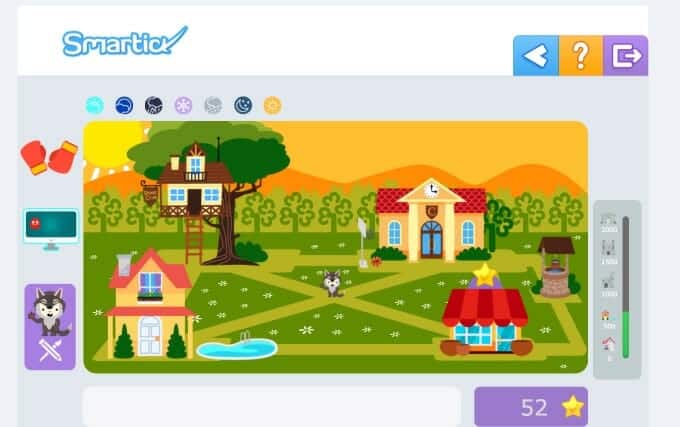 Children can customize their avatars, and also their Smartick bedrooms. Students can purchase objects, pets, and more from the store. They can even send gifts to their Smartick friends. My children will often log on to find they have received a fun gift from a sibling.

This is my 5-year-old’s Smartick bedroom. Yes, he’s wearing a wolf suit. (It cost him forty ticks.) 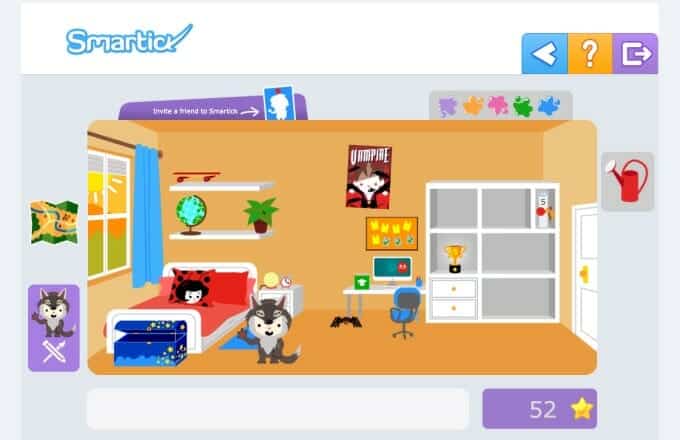 The treehouse is a space to check in on Smartick friends. Children can see their friends’ recent diplomas and achievements. The well of ideas is a place for children to leave feedback. They can make suggestions and ask questions… and they often get a reply from Smartick!

In the school, students can watch tutorials… and these tutorials aren’t grade-based they are interest based. The other day, my 5-year-old was learning about irreducible fractions. (And he was getting all of the tutorial questions correct!) I did a double-take and then I felt so thankful that we homeschool. 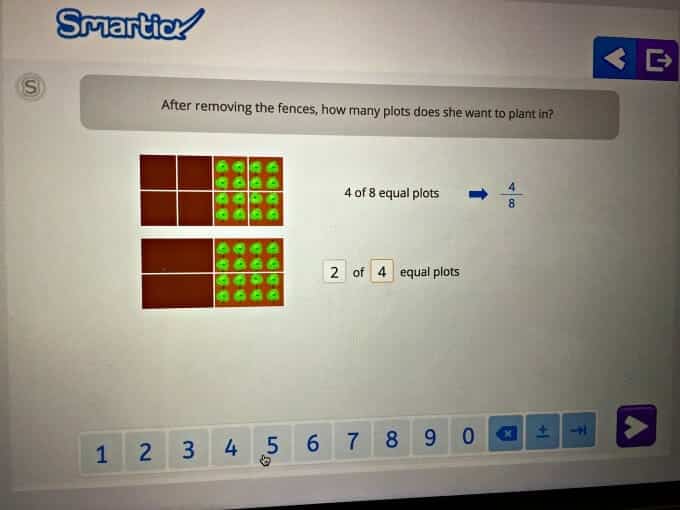 Throughout the virtual world, students have access to a variety of games. These gamification elements keep children engaged and help to improve concentration levels. 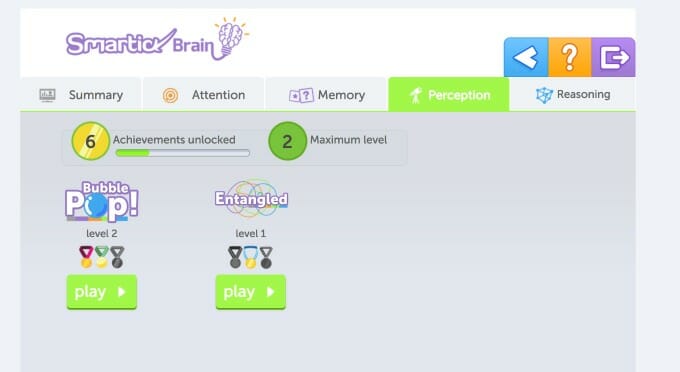 Once in the game area (“Smartick Brain”), students can select games from four different categories/cognitive skills.

All of the Smartick games are scientifically designed to reinforce the following cognitive skills:

My kids’ favorite game right now is Bubble Pop! I love that Smartick tells them what skills they are working on before they play. 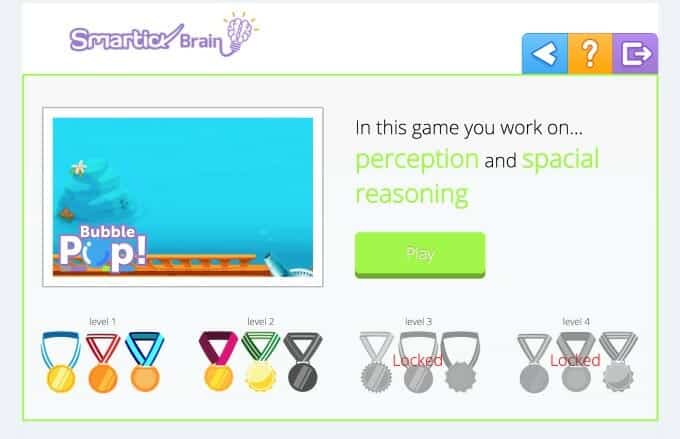 New areas of the virtual world are unlocked as children progress through Smartick lessons. My children are delighted when they log on to discover a new element of the virtual world, game, or tutorial. Smartick continues to be fresh and exciting for them, even after several months of daily play. 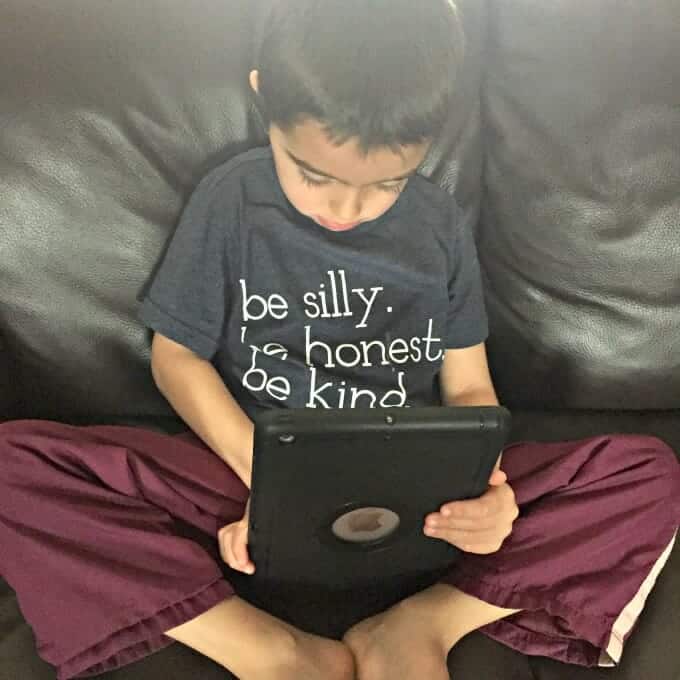 So, what does this homeschool mom think about Smartick?

There is so much to love about Smartick.

Bottom line: my children adore the program. My kids have such a positive view of mathematics right now. They wake up asking to play math! How often can you say that about a program?

I love that I receive immediate emails, as soon as my children complete the daily session. In that instant, I know what my kiddo was working on and whether the child ran into any difficulty. 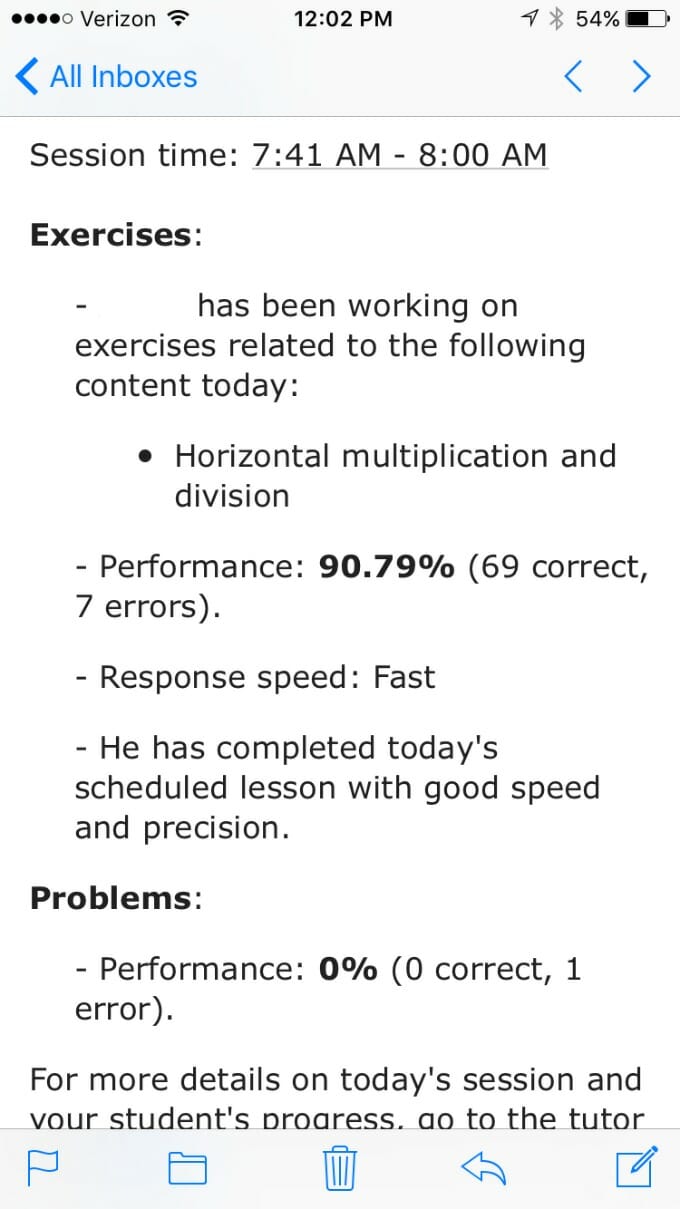 I can also tell when a child has completely goofed off during the Smartick session and we can talk about it, in that moment: 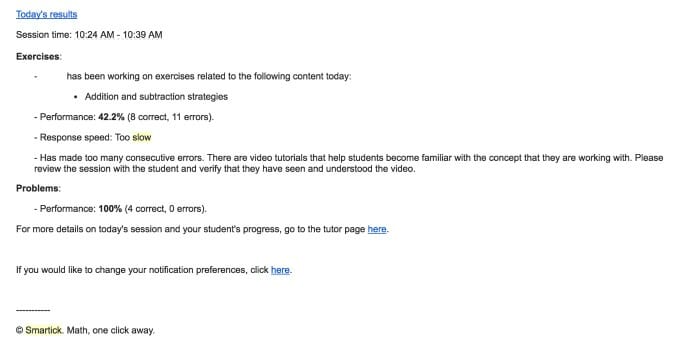 If I want more information about that day’s session, I can click the link to access the Smartick Parent Dashboard. The dashboard includes a summary of the child’s results including study plans, questions and units the child answered, response speed, and more. 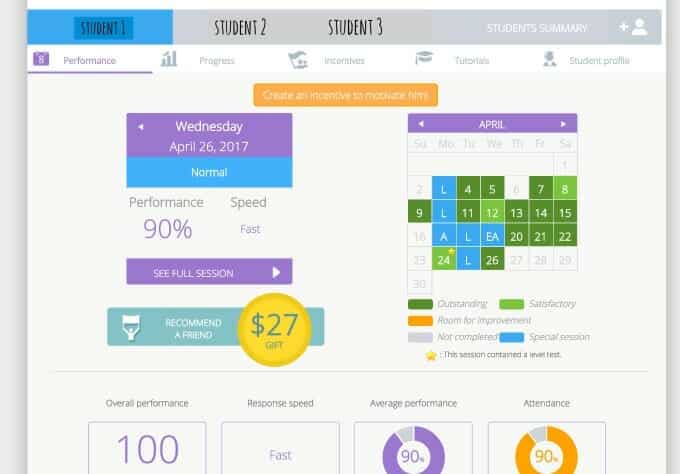 The results and summary are there immediately, in real time.

I also appreciate that Smartick is responsive. Although it is an online program, Smartick has a team of educators behind the scenes to answer questions via phone, email, or chat.

Are there any cons to Smartick?

Yes, there is one big con to Smartick and that is the high price tag. It’s super expensive, particularly for homeschool families and families with multiple children. I have shared this feedback with Smartick.

What do the kids think about Smartick Math?

By now, it’s clear that my kids are head over heels for Smartick, but I thought it would be fun to have them talk about Smartick in their own words.

We think Smartick is absolutely fantastic, but you don’t have to take my word for it. You can head over to Smartick and sign up for a 15-day free trial to see for yourself!

Smartick offers several pricing plans, depending on your choice of payment plan and the number of children. All current pricing plans are available on the Smartick  website.

Smartick also has a referral program. Families will receive a $27 discount for each friend referred and the new friend will receive 25% off their first subscription.

Now, it’s your turn. Tell me: Do you have a “dessert” item, like Smartick, in your homeschool? Share here! 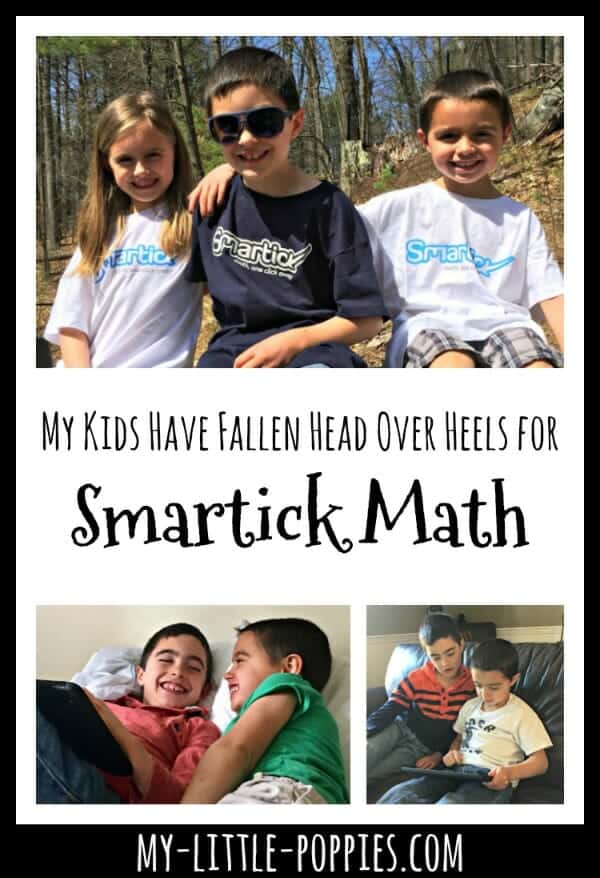