Seuss has the most vivid imagination of any child I know. He is constantly lost in his own little world. He spends his days morphing into various characters, and he has an army of imaginary companions. To say he tells tall tales would be a huge understatement. He is wildly, fantastically, imaginative. 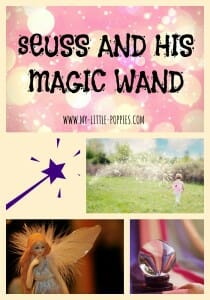 This is the adorably disgusting story about our imaginative child, Seuss, and his magic wand.

We love and fully embrace Seuss’ imagination. He provides us with near-constant entertainment and giggles. He is the Ambassador of Joy, after all! It is not unusual to find us running errands around town with Seuss, er- I mean Batman– fully dressed up and acting the part. Or, you may see him dressed like a mini-professional, going off to work for the day. For several weeks, he would transform into the Danger Monster and wreak havoc. Lately, he will morph into a superhero of his own invention without warning. I could be in the check-out aisle or trying to cross the road when this happens. The other night, while getting ready for bed, Seuss morphed into BEAR MAN:

Recently there have been some sleep issues in our home. Seuss is our night owl. We will put the kids to bed and then hear Seuss’ little feet padding around in his room. Occasionally, there is jumping. Often, there is some noise. When you go to check on him to see what is happening, you catch him in the midst of some imaginative scene. He could be slaying a dragon, taking a train ride, or rocketing to the moon. On more than one occasion, he has crept into his sister’s room to “haunt her house”- an act that is certainly not conducive to sleep.

Between Seuss’ wild bedtime antics -of which BEAR MAN is a perfect example- and Leo’s recent nighttime fears, we’ve had to tweak a few things over here. I’ve added some mindfulness activities to our nightly routine, complete with a worry basket (stay tuned for a worry basket post). The mindfulness has had amazing results for both Leo and T, and it definitely helps to calm Seuss down somewhat, until this happens:

Me: … Now take another deep breath and imagine yourself in your favorite place. It could be the beach, or perhaps you’re in the mountains-

Seuss: AND SUDDENLY A SPOOKY GHOST POPS UP AND HAUNTS YOUR ATTIC!!!!!

Me: Now your body feels heavy and relaxed-

Seuss: UNTIL THE BIG, MEAN DRAGON COMES AND SHOOTS FIRE AT YOU!

So, yes, our mindfulness is working wonders for some but is a work-in-progress for others.

This past week, in order to escape construction and preserve my remaining shreds of sanity, I took the kids up north to my parents’ condo in the mountains. Leo and T shared a room and Seuss had his own room due to the aforementioned bedtime shenanigans. Each evening, I would put the kids to bed and snuggle up with a good book, all the while listening to the muffled sounds of dragon slaying and superhero adventures coming from Seuss’ room. Some kids need to read before bed, while others need to slay dragons. It is what it is.

Each morning, Seuss would emerge from his room sleepy-eyed but grinning with stories of magic. “Mumma,” he’d say with eyes wide, “I think I might be magic!” I’d smile about this latest imaginative adventure as he recounted stories of making things disappear with his magic wand.

Leo, T, and I listened to many magic wand stories during the past week while we were out-of-town. We always enjoy Seuss’ wild stories. We never thought there actually was a wand, as most of Seuss’ props are what he calls imbisible- they are tucked away in the recesses of Seuss’ fantastic mind where only he can see them.

Imagine my surprise yesterday morning, as I was tidying the condo and packing to leave for home, when T came shrieking into the family room, wielding what we would later discover was THE magic wand: A TOILET PLUNGER! 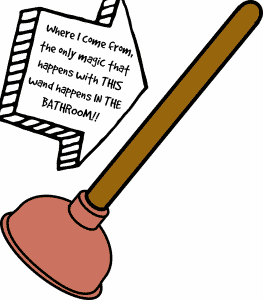 T was running toward me with a vintage-looking toilet plunger held high above her head, and a look of pure disgust on her face. On her heels was a red-faced three-year-old and he was shouting, “GIVE ME MY WAND BACK!!!”

Quickly, I confiscated the wand and instructed T and Seuss to scrub their hands like they have never scrubbed them before. While they were washing, I assessed the situation. The one toilet plunger that I knew about was still under the bathroom sink in the condo’s one bathroom. This plunger was a bonus, a rogue plunger. I started to have vivid flashbacks to every magic wand conversation. There were so many. Oh my God, my kid was playing with a toilet plunger every single night on vacation. Oh, the horror!

Calmly, I asked, “Seuss, where did you find this plunger?” to which he replied, “It’s a WAND. AND IT WAS UNDER MY BED.”

Now, lest you think my family is weird, I have to tell you that we aren’t the type of people who store dirty ol’ toilet plungers under beds. However, the child was adamant that he had found the wand under his bed. I’ve been going up to this one-bedroom condo since I was six-years-old and there has only ever been one plunger. I called my parents and they have no idea where the rogue plunger came from, or why it was in a bedroom. So, I’ve come to two hypotheses: either the plunger has a story that no one wants to tell (that likely involves beer), or Seuss really IS magic and that really WAS a wand. I’m choosing to believe the latter, but I’m still going to check under the beds when we head north again tomorrow!

Tell me, folks… do you have a kid with a wild imagination? Share your stories here!

It’s delightful when your imagination comes true, isn’t it?