Leo first read Harry Potter, books one through three, when he was in kindergarten. It was love at first sight and he mourned each book’s ending. That summer, he read them again, adding book four to the mix. Throughout the school year, he’d read one here or there, but this summer? This summer is a Harry Potter Summer. 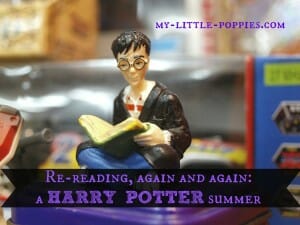 It has felt like Harry himself has become a part of our family in the last several months.

“Did you find Harry?”

The Harry books are like an extension of Leo. He is rarely seen without one nearby, often tucked under his arm. The books are worn and tattered, well-loved. 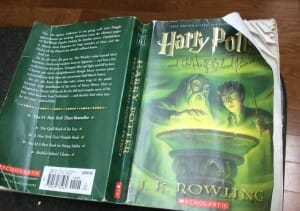 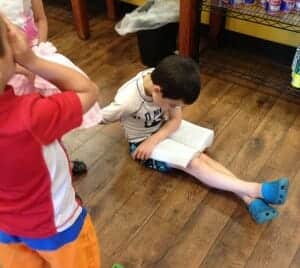 And then he jumped right back in. No sooner had he closed book seven’s cover than he picked up book one again. 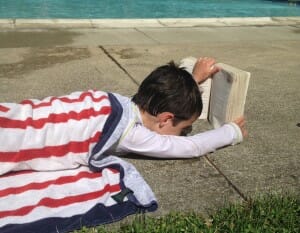 Warming up with Harry.

And so, Leo re-read the entire Harry Potter series for a second time. 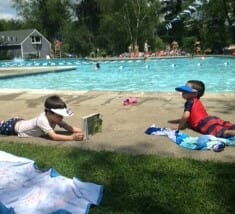 And then, once finished, he started the series for the third consecutive time. 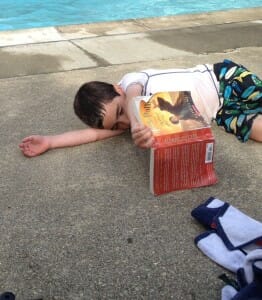 One might ask if Leo has read anything other than Harry this summer and the answer is of course! This IS Leo, after all. He’s never been able to resist a novel book. That said, nothing has held a candle to Harry. 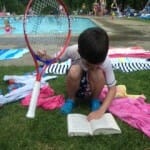 Sneaking in a few sentences before tennis.

One can see from our photos how we’ve spent our summer days: poolside. This summer has been unscheduled, with plenty of space between. Leo has been spending his space between with Harry. When he’s not running wild with his friends or swimming, you can find him on the pool deck with Harry.

I’ve spent some of my space between thinking about this Harry obsession.

Is it odd to dive right back in, moments after completing a series?

Should I suggest other books?

When will it stop?

Should I be concerned?

And then I remembered my summers with Anne. I think Harry is to Leo what Anne was to me as a child. I can remember summers spent reading Anne at the beach, in a fort, in a tree. I remember feeling lost when separated from the book, or when interrupted in the midst of a chapter.

Is there anything better than losing yourself in a book? Isn’t it wonderful to immerse yourself so completely in its story line, befriending characters as if they were real?

Childhood is the only time you can lose yourself in a book so thoroughly, as you are completely free from to do lists and responsibilities.

Thinking of this, I erase all concerns and questions from my mind, and I smile. Reflecting upon Anne Summers of old, I actually feel a wee bit jealous of his Harry Potter Summer. Jealous and happy for him- that’s he’s blessed with ample space to get lost in something he loves so much.

Now, it’s your turn. Do your children read the same books over and over again? What series did you lose yourself in as a child? Share here!

If one cannot enjoy reading a book over and over again, there’s no use in reading it at all.