Recently, I had the distinct pleasure of heading to the Department of Motor Vehicles… with Leo… during one of our worst weeks ever.

I’m just going to let you picture that for a moment, folks.

I know that some of you are sitting there thinking, “WHY?! Are you mad?!”  Believe me, as soon as I walked through those doors and saw that I was number 26 and they were only on number 1, and it was lunch time, I was thinking the exact same thing.

It was an impulsive move. Leo and I happened to be headed home from a doctor’s appointment, alone together, when I was stopped at a red light outside the DMV. The month was almost over and my license was about to expire. With my husband’s schedule, it was either go now or go later with all three of my little poppies. 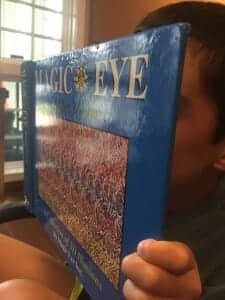 And so, armed with some Magic Eye books we found lodged under my passenger seat, we went for it.

The whining started pretty much immediately.

You mean we have to wait for twenty-five people to go before us?!

How long will this take?

This looks so booooring!

Why did we have to come here?

This is a terrible day!

We played Magic Eye and we played I Spy, and it helped… for a little bit.

But soon Leo tired of Magic Eye and I Spy. Without these distractions, he started to talk. If Leo is not reading, he’s talking. Those of you who know Leo in real life are fully aware that he comes with one volume: loud. We have been working on his Quiet Voice since … well… forever. He was born loud, he will probably always be loud.  And Leo is an impulsive kid- his movements and words happen before his mind has a chance to think about them. This often results in parental embarrassment. 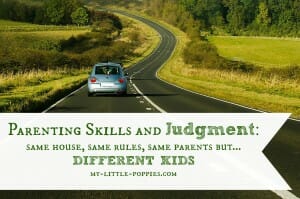 A perfect example of this would be Memorial Day weekend…

I was up north at my parents’ condo, watching the kids swim in the pool. A woman walked up to the pool, sat at the edge, and dangled her legs in the water. We exchanged hellos and then my three started to pepper her with questions. T and Seuss asked questions such as:

Do you live here, or are you visiting?

How long is your vacation?

Do you have any pets?

And then Leo, noticing a tattoo around the woman’s ankle, asked the following:

Is that a real tattoo or a temporary tattoo?

And when she replied that it was, in fact, a legit tattoo, he wondered aloud:

I’ve heard that a lot of people get tattoos when they are young but then when they get old, they regret it. Do you regret that decision?

In a split second, my child has not only implied this woman was old but he had also questioned her decision-making ability. I wanted to roll off my lounge chair, slither away, and pretend he wasn’t mine. Face burning, I began to sputter some parental something-or-other but the woman was laughing.

She was laughing! She was belly laughing so hard that she had tears streaming down her cheeks. She kept trying to speak to me, but every time she started she’d start laughing again.

Before I knew it, we were all laughing. I still wanted to die, but that level of laughter is unbelievably contagious.

Once the laughter quelled, the woman said:

I love that kid! He’s awesome. Don’t be embarrassed – he just calls it like he sees it and that is awesome.

Then, she went on to tell the story of her tattoo, which she did regret. She answered all of my children’s eighty-gazillion tattoo-related inquiries. When it was time to go, she thanked me.

I haven’t laughed that hard in years. Thank you.

I thanked her in return, for answering all of my children’s questions so thoroughly, and I apologized one more time for Leo’s comment.

He’s just curious and it was an honest question. I taught for thirty years and I love inquisitive kids. Your kids made my afternoon.

I was thankful that we had crossed paths with such a kind and understanding woman. I love when other people get kids like Leo. It doesn’t always happen that way. Over the years, there have been so many incidents where I found myself red-faced, stumbling over my words, apologizing for a comment or behavior.

Now, back to the DMV…

For a moment, I’d like you to imagine super-squirmy Leo and I, at the jam-packed DMV where seats are packed in so tightly that you are practically sitting on your neighbor. Now, picture Leo offering the following thoughts for all to hear:

It smells in here, doesn’t it? Doesn’t it smell like someone didn’t shower?

How do you KNOW what an unshowered person smells like? How do you know that already? It’s just clear to me that somone in here didn’t shower.

Why are there so many surveillance cameras in here? What crimes do they think people want to commit in here? Are there criminals in here, do you think?

Remember Noah’s Ark? God could totally do that again. He could decide that this world is too selfish and just wipe it clean.

Do some adults talk to themselves? Does it mean they have a problem of some sort? Like, the wiring in their brain maybe?

There are a lot of similarities between The Bible and Greek Mythology, don’t you think?

Somewhere between the intermittent whining, the loud observations, and the conversations, I started to get some of Those Looks.

You know the ones. You’re out in public with your Leo, your squeaky wheel, your squirmy worm, your bouncing bean, your top-volume talker, your big-on-ideas-low-on-patience kiddo, and then your child encounters an obstacle. It could be waiting, or something that causes frustration, or whatever … and then… it starts. Your child does whatever he does when he meets this type of obstacle. It could be whining, or crying, or flopping to the floor, or maybe his energy spikes and he’s like a tornado buzzing around. Or, maybe it’s all of that and more.

My kid would never do that in public.

If it were my kid [blah blah blah].

He’s too old to be doing [blah blah blah].

The Look, and the judgment that goes along with it, used to bother me more

I always say that I barely survived 3-year-old Leo. It was a rough year. Leo was like a terror on wheels. I could barely keep up with him, let alone manage his behavioral outbursts which all-too-often happened in public.

Hindsight is 20/20. I can see now, in retrospect, that it was a culmination of his temperament, his giftedness and asynchrony, and his SPD. I spent that year under-arming him out of public places, getting The Look over and over and over.

I did have one memorable encounter with a kind soul at a completely different pool way-back-when, but encounters like that were few and far between. The rest of the time, I just felt judged and embarrassed.

My cringe-worthy moments with Leo have changed over the years. I’m no longer under-arming him out of public places. Instead, I’m asking him to use his quiet voice and to think before he speaks.

In many ways, this is easier. But, it’s still hard. I still get The Look and the judgment that comes along with it.

I’ve realized that, despite The Look from others, these moments are NOT about my parenting.

This isn’t about parenting, it’s about people. I have three very different children- three very different people. Each child has unique strengths and weaknesses. When I am out and about with my younger two, I receive countless smiles and positive remarks from strangers. This is not to say that they behave -on a whole- better than Leo (because, belieeeeeeve me, they don’t!), it’s just that they can Turn It On in public and they save their ugly moments for when we are home, alone.

All three of these little people live in the same home, with the same rules, and the same parents, but they are three very different people.

Back to the dreaded DMV…

So, when Leo decided – during an especially quiet DMV moment- to announce the following…

Do you know how, sometimes, your bum gets itchy? I’m wondering if the INSIDE of your bum can be itchy. Do you know what I mean? I’m talking about THE INSIDE of YOUR BUM. I wonder how far inside your body you can FEEL things like itch and pain?

When he said that, I’m sure I got The Look, but I didn’t cringe. I was too busy belly laughing, just like the woman at the pool with the unwanted tattoo. Then, I pulled out my phone and entered his question into Google. As I did, I thought to myself:

This is Leo. Yes, he’s got some rough edges, but we’re working on them. He’s curious, and energetic, and inquisitive, and loud…. and he’s awesome. He’s a work in progress.

And, really…. aren’t we all just works in progress?

Tell me: How have you felt judged lately? When was the last time you received The Look? What was the most embarrassing question you’ve had to field in public? Share here!