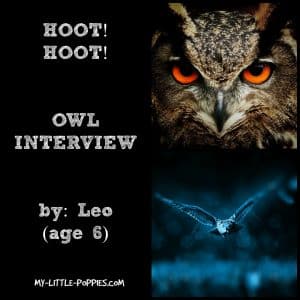 My Interview with Ricky:

Can you tell us the story about the night you went to feed the chickens and talked to an owl?
We save all our kitchen scraps for our chickens (except meat and dairy).  We keep them in a big bowl on the counter, which is emptied every day or two.  The chickens love the food and it helps us reduce waste.  It was early evening right around dusk when I came back inside from feeding the chickens that I heard the owl hooting!
Where were you when you heard it?
I was walking into my front door and ALMOST missed it!!
Were you scared?
Not at all.  I know that owls prey on small mammals and insects, so I didn’t think he wanted me for his dinner!
How long was the conversation?
I tried to mimic the owl’s hoot back to him (or her) every time it hooted.  We probably talked for 5 minutes.
What did the owl sound like?
He sounded just like this….
Do you know what type of owl it was?
Based on the sound it made I would guess Great Horned Owl.
Did you see the owl?
I wish I had, but I did not.
Have you found feathers in your yard?
Not that I know of.  Just chicken feathers!
What do you think the owl said to you?
“Hey, can I have some of those chicken scraps?”
Have you heard it since then?
No.
Have you ever gone owling before?
No but I like sitting outside at night when it’s warm and listen to all the sounds in nature!  We have a fire pit outside and it’s the perfect place to roast marshmallows and listen to animals!  We watch the bats at night in the summer.
Have you ever dissected an owl pellet?
Nope!
Have you ever read Owl Moon? If not, you should.
I haven’t but I will put it on my reading list.  Than you for the recommendation.
Have you thought about a wildlife cam? Have you seen the owl cam online?
I think the idea of a wildlife cam is awesome.  I don’t have one, but a friend that lives down my street has one.  He has recorded deer, bear and all kinds of animals.  He’s very interested in nature too.  He hiked the Appalachian trail, which is a trail that runs between Georgia and Maine!!  It took him 6 months to hike it.  He speaks at the library about his experience.  You should go listen to him speak sometime.  He saw lots of incredible things on his hike!
I hope you enjoyed the interview. Thank you to Ricky for answering my questions!
Have a great day!
Leo
PS. Check out this OWL PELLET!
Here’s Leo’s Lounge! on Pinterest: