One night, when I was very young, I had a nightmare about Porky Pig.

At least, that’s what my parents would tell you.

But the thing is, I didn’t. It was something more, or perhaps something less. Today, I’m going to tell you how it all went down. 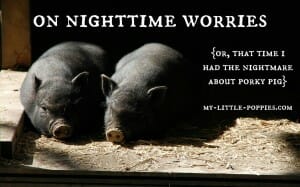 {Or, that time I had a nightmare about Porky Pig}

It was the middle of the night and I was very young. I’m talking toddler-young. I know this because my room was next to my parents’ room, in what was later our dining room. It was before my parents added an addition to our small bungalow. I was probably two or three years old.

Well, folks, that was exactly what I was doing in my bed, in the middle of the night, at two or three-years-old, when I was supposed to be sleeping.

I’ve never been a good sleeper.

Anyway, I kept doing this and, for a while, I was completely fascinated. It was as if I was manufacturing stars and constellations in my bedroom. I would watch the dots and flecks and try to make sense of them. One looked like a circle, another a string.

But then things started to change from interesting to scary.

Because, suddenly, it started to seem like those colorful shapes and flecks and patterns were coming through my two big bedroom windows. It looked like they were coming in, from outside, and making their way toward my bed where I sat, upright and alone.

And that, my friends, freaked me the hell out.

And so I started crying and I called for my parents.

This is where my memory gets a little fuzzy, but I remember my dad coming in to talk to me. Usually, my mom was on nightmare patrol, but in this memory it was my father and I remember he wasn’t happy about the middle of the night wake-up. Years later, my mom would say that she came in, but I don’t remember that part.

The parent in me thinks it’s quite possible that they had to come into my bedroom multiple times that night and that this visit from my dad was the last hurrah. And the parent in me guesses that my mom was either pregnant with my brother or had a newborn at the time. Maybe my mom sent my dad in to tell me to go the heck to sleep. Maybe it was his turn.

I’m sure all the parents out there can relate.

But the thing is, there was no nightmare. I hadn’t been asleep. I had been staring at my windows and watching patterns in the night until they stopped being amusing and morphed into something threatening.

How do you explain that to your parents when you are only two or three-years-old?

But he kept asking, trying to fix it.

And so, eventually, I replied, “Porky Pig.”

I don’t know why I said that. I just did. I never liked Porky Pig, but I certainly didn’t find him scary.

Porky Pig was my two or three-year-old way of fixing it. My dad wanted an answer, and he wanted it quickly, and so I gave him one.

And, folks, I was teased about that nightmare for years!

“Hey, Cait! Remember that time you had the nightmare about Porky Pig climbing in your window? Ha ha!“

Years later, I was able to describe what happened that night. I explained the darkness and the patterns entering those two dark windows. Porky Pig had never been there, but it was the best answer I could give at the time.

Sometimes those nighttime worries are bigger than the words

Do you know that I think about that Porky Pig night all the time, now, as a parent?

It’s the perfect example of how young children can have complicated thoughts and worries and fears and yet not be able to verbally describe them.

Sometimes the worries are bigger than the child.

Sometimes the child’s mind houses thoughts that his or her emotions cannot yet process.

Sometimes, the child’s thoughts are bigger than his or her ability to verbally describe them.

And, believe me, I understand how hard it can be to be patient and understanding at two or three in the morning. I am the worst version of myself at 2:00 am.

But we could all learn a lesson from Porky Pig. Because, sometimes, our children are doing the very best they can at that moment.

And we should try our very best to do the same.

Do you have a child with nighttime worries?

You are not alone. I’m the mom of a world-class worrier and I have some posts for you:

Now, it’s your turn. Tell me: Does your child struggle with nighttime worries? Do you have a child with fears too big for her thoughts? Share here.