This is Leo. This month I’m writing a story for nanowrimo. I asked my mom to put it in the Lounge so you can read it. Here it is! Thanks for reading!

Fred & Roz’s Adventures in the Jungle

Written and Illustrated by Leo 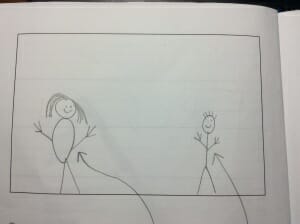 This is Roz. This is Fred. Roz is twelve. Fred is thirteen. They are brother and sister. They live in New Hampshire. One day, they were walking in the woods. They found a strange treehouse. They climbed up the ladder. A book was open. There was a picture of a jungle. Fred said, “That looks so cool. I wish we could go there.” 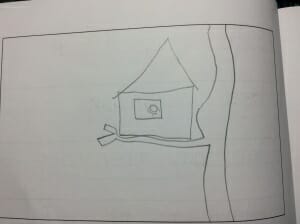 Suddenly, the treehouse began to spin. Roz gasped. They were in the same place as the picture on the book!

They started down the rope ladder. They walked through the woods. Soon they came to a river. “How will we get across?” Roz asked.

They grabbed onto a log. Suddenly the log rose up. It was not a log! It was a crocodile! As the crocodile swam away down the river, Roz and Fred waded across the river.

Suddenly they heard a screech. A monkey was swinging through the trees. He threw a banana at us. Roz and me ducked. We started walking through the woods again. 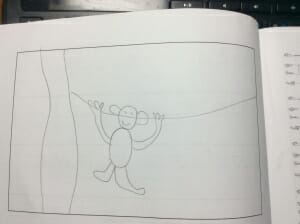 Suddenly, two black and orange pups bounded out of the woods. Roz said, “Let’s go look at them!”

Suddenly, they heard a roar. A jaguar leaped out of the woods.  Suddenly a monkey swung down and bit the jaguar’s tail! The jaguar roared and spun around. It chased the monkey away.

Fred turned to Roz, but Roz was gone! Fred tried to think of places Roz would go. 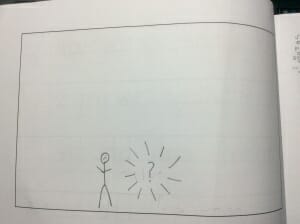 He looked by the river. But Roz was not there. Finally he found her in the woods. She had been waiting fo rhim. They started to look for the treehouse.

THey came to a river. Suddenly an alligator popped out of the river. It almost bit Roz’s finger. They ran away. 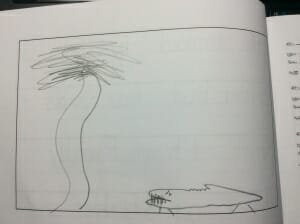 They walked deeper in the woods. Suddenly they found themselves in the middle of a clearning. A low growl sounded. A tiger came out of the woods! Fred and Roz climbed a tree. The tiger tried to find a way to get up the tree. It could not. It went away.

They could not find the treehouse. They walked on. They saw a bush. Ten frogs leaped out! Fred and Roz screamed. They ran away. Fred found a tree. They ate bananas. Finally, they saw the treehouse.

Fred said, “Roz, there was a book with a picture of where we live. Maybe if we wish on that, we can go home!” But it wasn’t there! Suddenly the monkey swung down and gave them another banana!

Quickly, Fred and Roz looked around for the book. They found it underneath a book about ninjas! Fred said, “Maybe if we wish on this!” They closed their eyes and wished.

They were back home, in New Hampshire!