I’ve been thinking about mom lies and mom fails lately. The other day, a dear friend of mine was trying to sneak in a little Christmas shopping while at Target with her daughter. Well, her daughter saw one of the gifts and then had lots of questions and my friend felt caught in a corner and wanted out so she told what I call a little fibber: she said that the gift was for my kiddos. And then, of course, my friend worried that our children would cross paths between now and Christmas so she confessed her fibber to me. The story made me laugh, and of course if we run into her daughter, I’ve got my friend’s back. I shared one of my past parental fibbers with my friend to make her feel better because we’ve all been there, haven’t we? 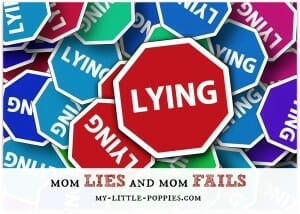 It got me thinking about honesty and parenting. I consider myself an honest person. I’m not sure whether it’s the Catholic guilt or what, but lies are supremely uncomfortable for me. Even the teeniest of white lies, the ones to you might offer to spare another’s feelings, eat at me. I feel so incredibly guilty, even about the untruths we tell to make childhood magical: the Tooth Fairy, the Easter Bunny, and Santa Claus. I can’t tell you how relieved I was to pass Edgar the Elf, our miserable Elf on the Shelf, off to my friend. It was a weight lifted, and I felt lighter. 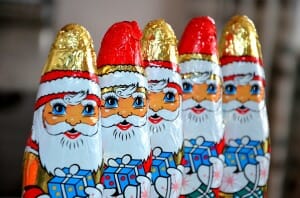 The other day, we were driving to our favorite farm stand when Leo proclaimed, “Sometimes, when I think about Santa Claus, I wonder if the whole thing is just a myth. A myth to spread joy and get kids to behave better than normal.”

Folks, I cringed and the guilt surged. I don’t remember my words exactly, but it was something about doubt and faith and we had a short but very sweet discussion on how sometimes we believe blindly in things like God and Santa, even though we don’t have proof, and that sometimes we doubt and how that is part of life. Leo ended the conversation by saying, “I could test it, to see if it’s real. But I’m not ready yet. Let’s go get a honey stick.” And just like that, the conversation was over, but the fact that he had admitted to me that he’s not ready to know eased that fibber’s guilt just a smidgen.

Obviously, Santa and the Tooth Fairy and the Easter Bunny are the big ones, but I’ve had other parental fibs. Just last night, in fact, one slipped from my lips almost as a reflex. It surprised me. You see, Leo has been having infrequent but recurring nightmares about a praying mantis-grasshopper. In the dream, he’s asleep in his bed but then he opens his eyes to see this monstrous praying mantis-grasshopper sitting on his dresser, staring at him, about to strike. Dream-Leo flees his room, runs down the hall, and jumps from the top of our staircase to the bottom in one fell swoop- and then wakes up screaming. 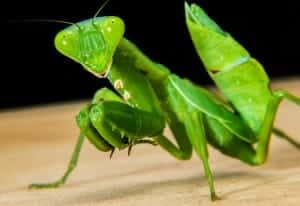 Terrifying, right? I feel for the little guy because it sounds awful. He had this dream the night before last. Leo is a worrier by nature and he can worry himself right into a tizzy, which is what he was doing last night right before bed, when I surprised myself with a lie. The dream was still fresh for him, he hadn’t shaken it yet. Schizz and I were tired; the praying mantis-grasshopper had ruined our night as well and we just wanted everyone in bed, stat. Well, Leo was going on and on and on about how he was worried the praying mantis-grasshopper would visit him again and how he wished he could wake himself up from a nightmare when I said, “Do you want to know a trick? If you are in a bad dream and you look at your feet, you’ll wake yourself up.”

Um, what? Schizz looked at me like I was crazy and I gave him the “I don’t know what I’m doing” shoulder shrug but Leo ate it up, relaxed, and went to bed while my guilt level sky-rocketed. There was no praying mantis-grasshopper last night, but that doesn’t mean I don’t feel a wee bit guilty about the whole thing.

I don’t usually have spontaneous lies like that, folks, because they eat at me. I think, as parents, we lie when desperate, when we feel we are backed into a corner. It’s our last-ditch effort to restore balance. And, because of my Catholic guilt or whatever it is, I can share two other spontaneous lies from Caitlin past, both of which stand out in my mind because they brilliantly backfired on me. That’s what I get for lying, right? I will share them here, to give you a laugh at my expense this Friday morning. Consider it a gift!

Let me preface these two doozies by stating that both occurred when Leo was three years old. Having experienced age three three times now, I can say that it has been our toughest age so far. And, of my three, three-year-old Leo was by far my most challenging three. And, both of these fibbers occurred while I was ferociously pregnant with Seuss. So I’m blaming three-year-old plus pregnancy brain. I know you’re sitting there thinking, “Excuses, excuses!” Yeah, you’re right, guilty as charged. Let me present to you my fibbers and I swear to you, these are both true stories. I can’t make this stuff up!

First, let me set the scene. It was August, it was brutally hot and humid, I was nine months pregnant with Seuss, and I wanted to take the kids to the pool. My third pregnancy was a tough one and I was technically supposed to be “on rest” which, as all moms know, is a huge joke. Schizz gave us a summer membership at a local pool to assist with the rest thing, the thought was that I could plunk the kids in the kiddie pool-water table area and then sit for a while. Well, life is not that easy when you have a three year old. There were many times that summer when I would no sooner arrive at the pool with Leo and T in tow when Leo would throw a tantrum of epic proportions and require me to pack us back up and underarm him the hell out of there, which was obviously not part of the whole “on rest” protocol. 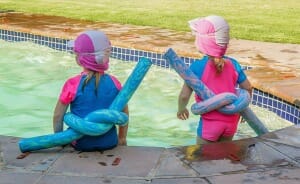 On this particular day, a Wednesday, I had just under-armed him out of there the day before. I was exhausted. As we pulled into the pool parking lot, he was already ramping up. I could tell this was going to be another tough day with three-year-old Leo. So, what did I do? Folks, I’m not proud of this but I impulsively told Leo that I was going to make an appointment with his pediatrician to discuss his behavior and then I fake called our pediatrician in the parking lot. As I said, I’m not proud.

And do you want to know what happened next? Folks, I kid you not… When we got to the pool, guess who was sitting at the kiddie pool with his kids? Guess who saw us and waved and exclaimed, “Hi, T! Hi, Leo!” OUR PEDIATRICIAN, who has Wednesdays off. Leo’s face went ashen but he behaved amazingly well that day. He will, to this day, occasionally bring up the time the pediatrician “spied” on him. Guilt.

I did later confess my fibber to our pediatrician. And now to you all.

I’ll set the scene once more. It was August (again), it was brutally hot and humid (again), I was nine months pregnant with Seuss (again), I had a headache, and it was either a Saturday or a Sunday morning because Schizz was home. T and Leo had been having a tea party in our playroom but then Leo busted out with one of his epic tantrums. Folks, I can’t even describe these tantrums except to say they were so flipping loud and Leo was born a stubborn little fellow so these tantrums were Guinness-Book-of-World-Records-level-long. My head was throbbing (excuses, excuses!) and do you want to know what I said while I was standing there in our playroom? I told Leo about the concept of noise pollution and said that he was so loud that a neighbor could call the police on us and report us for noise pollution. And, if we’re getting technical here, it was actually that loud. That said, I am still not proud.

Do you want to know what happened next? Again, I kid you not… within ten minutes of those words leaving my lips, while the tantrum was still in progress, our doorbell rang. Our doorbell never rings. Do you want to know who was standing at the door? Yup, you guessed it: a police officer. The officer wanted to know if we had seen anything suspicious the night before because some fool had left donuts all over our neighbor’s front lawn. As the police officer was explaining this, Leo stared screaming, “I don’t want to go to jaaaaaaaaaiiiiiiilllll!!!” and he fled the scene, up our stairs, and into his bedroom, slamming the door. Talk about feeling guilty, folks! The poor little kid! I still cringe when thinking about this story.

I confessed my crime to the officer, who found the whole thing absolutely hysterical. For about a year post this incident, the officer would toot his horn and wave at us when he drove by our house. I kid you not. I also apologized to Leo and hugged the holy heck out of the boy. I might have even done the ugly pregnancy cry thing. I felt awful.

So, back to that praying-mantis grasshopper nightmare… 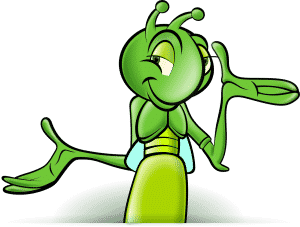 Folks, I’m confessing last night’s fibber to you guys. Here’s hoping my praying-mantis grasshopper fibber doesn’t come back and bite me in the tush. That thing is ridiculously creepy!

What about you guys? What parental fails have you had lately? Do you stew over mistakes and feel guilty? What lies have you surprised yourself with?

Honesty is the first chapter in the book of wisdom.