Folks, I’d like you to meet the poppies* behind My Little Poppies. But, first, a word about privacy. I’ve mentioned that I am a planner by nature but that I spontaneously started this blog the very same week that we decided to homeschool Leo. Parenting and attempting to educate gifted and twice-exceptional children can be extremely stressful and lonely because no one talks about this stuff. I want to share our story because I know there are others out there, like us, who are reading and researching and looking for answers. By sharing our story, I know we will help others. That said, it’s tough to put your family out there. The internet is permanent, nothing is truly private, and you never know who you can trust. So I’m asking my readers to respect our privacy. Bottom line: be kind, folks.

Meet The Poppies From My Little Poppies 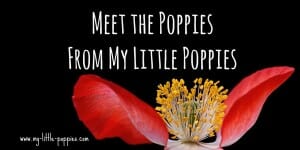 Eight years young with huge brown eyes and to-die-for lashes. He’s funny. He’s energetic. He’s spirited. He’s insanely creative. He can drive you crazy with questions. He never, ever stops moving until sleep somehow sneaks up on him and grabs hold of his insatiable little mind. But, be forewarned…he’ll wake up talking about something interesting and he’ll have big plans for the day, so you’d better get a good night’s sleep yourself.  He’s absolutely, exhaustingly, brilliant. Leo is a My Little Poppies contributor. Please be sure to check out his blog within our blog, Leo’s Lounge! He has oodles of cool stuff going on over there!

His little rascal was up later than his mother last night, trying to finish a great book. He eventually dozed off and just finished t now, before breakfast. What is the last book that made YOU lose sleep? Share here!

Six years old with blonde hair and big blue eyes. T is, without a doubt, the kindest little soul that I’ve ever met– and she lives in our home! How lucky are we?  The amazing thing about T is… she was born that way. She has, from the beginning, put others before herself.  Even at two!  Who willingly shares at two??  When I brought Seuss home from the hospital, T adopted him as her own. He would cry out and she’d beat me to his side, often presenting something she just somehow knew that he needed (like his monkey lovey).  She cares deeply for others.  She is an amazing little human and I’m proud to know her.  Schizz and I often find ourselves wishing we could be as kind as T, as sensitive, and as generous as T.  She can be so quiet but she uses those big blue eyes to absorb it all.  I often tell friends that she may not say much but, once we are alone together, she will explode with information: what people were wearing, how people were feeling, subtle social interactions, etc.  She could be an FBI witness or a psychic… nothing escapes her.  She’s also funny and smart and beautiful. And she wrote an unbelievable homeschool manifesto that I will treasure forever.

What can I say about this four-year-old little fella?  He arrived on the scene and our family was instantly complete.  Schizz and I frequently refer to him as the “Ambassador of Joy” and it’s really true.  The kid spreads happiness.  People LOVE him.  He exudes joy, he is funny, he is charismatic.  Everywhere I go, strangers ask, “Can I keep him?”  No, no you cannot…he is ours.  He is by nature laid-back and flexible- he doesn’t care where he is, he’s just happy to be along for the ride.  He has the same big brown eyes with to-die-for lashes as his older brother.  And he’s smart.  You can usually find him grinning, with deeply dimpled cheeks, engaged in some complicated imaginative play…totally immersed in his own little world.  I often wish I could sneak inside his mind for a minute or two because I’m certain it would be an absolute blast. At any given moment, our little Seuss can morph into a bear, battle a dragon, dance like a princess, ride a ‘tumble slide’ of his own invention, or change into Batman. No wonder people want to keep him!

Wondering what the poppies are up to?

Mother’s Day is on the horizon. How will you celebrate? Share here!

*If you are wondering why this site is called My Little Poppies, I encourage you to read about poppies in this article by Miraca Gross.