Oh my gosh, you guys. Have I got a story for you!

Do you remember when I wrote this post about how my oldest has struggled with sensory stuff since birth, but that we were finally able to go glow bowling without major drama? Remember how I said that we had conquered glow bowling and our next stop would be a movie theater?

Yeah, well… it’s been over a year since that post and we haven’t made it to the movie theater yet. The kids have finally filled the family kindness bucket and we plan to go to see The Peanuts Movie when it comes out next week, but I was presented with the chance to take the kids to Marvel Universe Live. 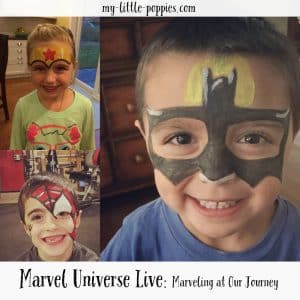 *Disclosure: I received tickets to Marvel Universe Live at no cost in exchange for a post. I was not required to write a positive review. As always, I only share what I believe my readers would enjoy.

For the uninitiated, Marvel Universe Live is a live show featuring twenty-five well-known superheroes from Marvel Comics as they embark on an action-packed adventure. During the performance, some of Marvel’s much-loved superheroes must band together to locate and reunite the Cosmic Cube fractals and defeat the dreaded Loki. Featuring Captain America, Hulk, Iron Man, Spider-Man, Thor, and Wolverine, among others, Marvel Universe Live is filled with action, special effects, and suspense. And, if you love bad guys like my 4-year-old, there are plenty of those, too: from Loki to Red Skull to Electro to Green Goblin and more!

If you’ve followed this site for any length of time, you already know that I have a superhero-loving 4-year-old. My little superhero has been obsessed with all things Marvel and DC for well over a year. He’s forever morphing into various superheroes and villains. It is not at all unusual to see me out in our community with my superhero sidekick.

My little superhero is always up for adventure! 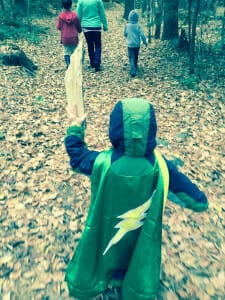 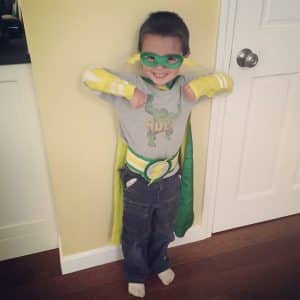 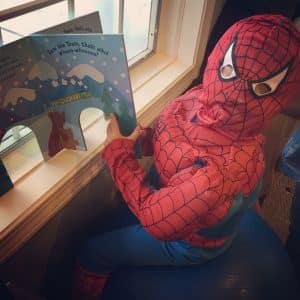 And he LOVES a good book!

Speaking of good books, Seuss has treasured two superhero books for the past year-plus. They are tattered and well-loved. He falls asleep with them regularly.

This is an encyclopedia containing EVERY Marvel character.

And THIS is an encyclopedia with every DC character.

Folks, before this superhero obsession I had no idea about the whole DC – Marvel thing. I thought superheroes were superheroes and that they all knew each other or hated each other, or whatever. Roll your eyes at me if you want, but I spent my childhood with Anne with an E and the smurfs, not DC or Marvel.

Children are our wisest teachers and Seuss has schooled me in superheroes!

So what does a mama do when she’s presented with an opportunity to make one child over-the-moon-happy, but that same opportunity might be extremely stressful for the other son?

I’ve mentioned before how I sometimes feel guilty because there is one squeaky wheel in our home while the other two demand far less attention. I decided to go for the opportunity, despite the fact that it could be a terribly squeaky evening.

Here is how we prepared our oldest, who struggles with sensory stuff, for Marvel Universe Live: 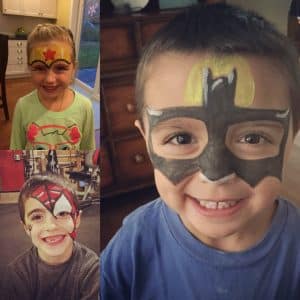 I realize that only one of these three faces is a Marvel face, but we support ALL superheroes in our home!

A SUPER Family Night Out

The kids’ excitement was palpable as we quickly ate dinner and gathered our coats. These early birds could not believe that they were heading out to an event at 7:00 pm on a school night. 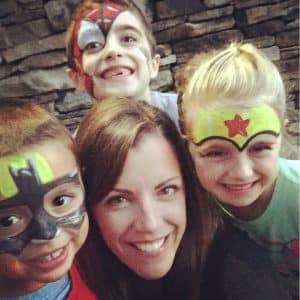 Leo kept telling us he was going to love it. We hoped, especially for Seuss’ sake, that he was right! 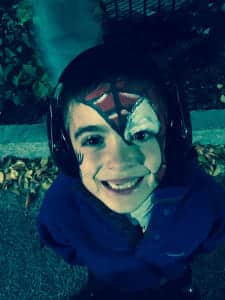 To say that Seuss enjoyed himself would be a GIGANTIC understatement. He was enthralled from the beginning ’til the end and hasn’t stopped talking about the event! His face looked like THIS the entire night:

But what about Leo? Well, he started off the night armed with headphones. 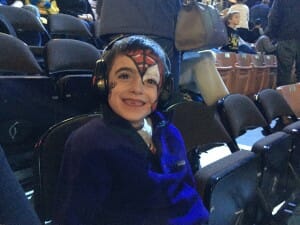 He was excited but visibly nervous. When the lights went out and the show began, he huddled close to me. I could feel his little heart pounding. The first explosion made us both jump and Schizz and I exchanged glances. We were waiting for him to freak out; we were convinced that he would scream and flee at any moment.

Well, I am happy to report that Leo loved it. It helped that he was armed with a program that outlined the events of the story. He read it before the show started and followed along as the night went on. 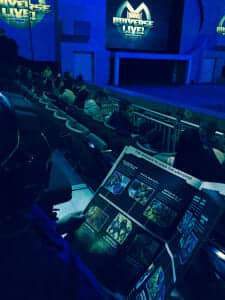 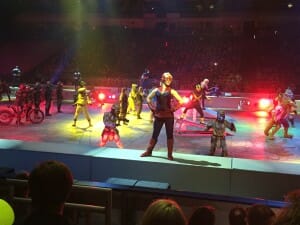 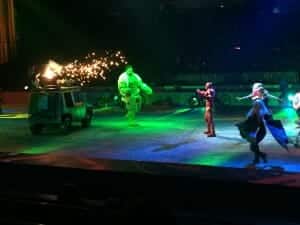 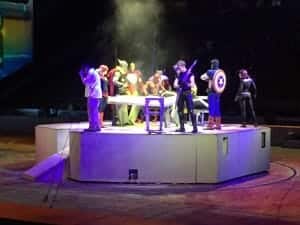 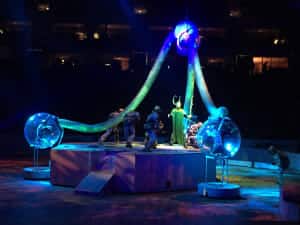 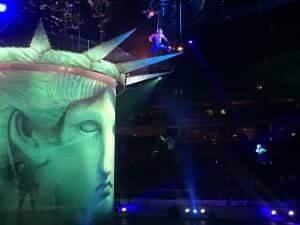 The whizzing cars and jumping motorcycles.

The smell of exhaust.

Folks, he did it.

He not only did it, but he rocked it.

About three-quarters through the show I looked over and saw THIS: 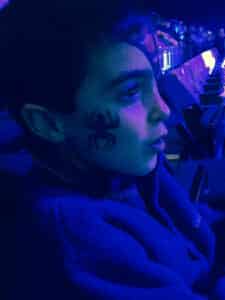 They all loved it. 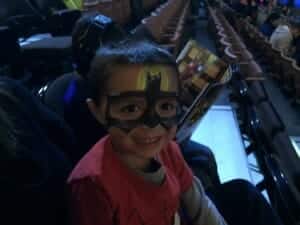 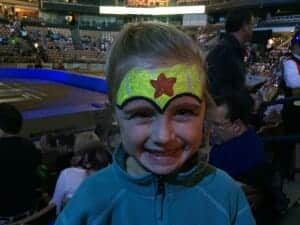 Marveling at Our Journey

Once the kids were tucked in bed, hours later than their usual bedtime, Schizz and I marveled at our journey and how far we have come. We just couldn’t believe it: Leo not only sat through all of that, but he enjoyed himself.

What a difference a year can make!

Tell me, folks: What successes have your family celebrated lately? Share here!