This is Leo. Last week, I did a Groovy Lab in the Box on weather. I made a barometer, a rain gauge, and an anemometer. I also read a couple of books about weather. My dad has a friend who is named Dan and he is a meteorologist. I thought it would be cool to interview him. I was a little bit nervous about talking to him so I sent him an email and he said he’d be happy to answer my questions in an email too! I sent him questions and he had some great answers. 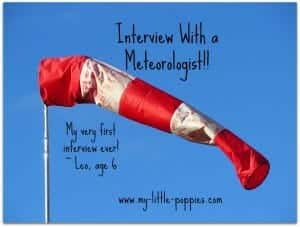 Here is our interview, I hope you like it. This is my Dad’s Friend, Dan: 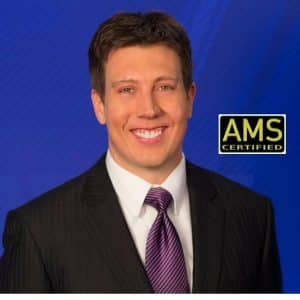 This is Dan Thomas, meteorologist.

Question #1: When did you know you wanted to be a weatherman?
Answer: I first realized I wanted to be a weatherman when I was just six years old.  I actually made a cassette recording of a weather report one winter morning when I was that age….and still have it at my house today!  I always liked to watch big storms at my home in North Andover, where your daddy grew up.  Snowstorms and Hurricane Gloria of 1985 were my favorites!
Question #2: Do you like rainbows?
Answer: Rainbows are neat.  Yes!….I do like them.  They appear out of nowhere (so it seems) and can make the end of any rainstorm so beautiful for so many people to see all at once!
Question #3: What is your favorite type of weather? Would you rather live someplace hot or someplace cold?
Answer: My favorite type of weather…hmmmmm…..that’s a tough one.  I’d have to say snowstorms.  We don’t get a lot of them here, but they’re so fun to predict and most people are excited about them before they arrive and while the snow’s falling.  Hurricanes and tornadoes are also fun to deal with (for me), but they cause so much destruction and heartache.  Snowstorms are usually far less damaging.  Truthfully, I’d rather live some place hot.  I love the heat and humidity, now.  I’ve lived in the South for 20 years now and would have a lot of difficulty moving back to a cold climate again.
Question #4: How did you study to be a meteorologist?
Answer: I went to Penn State University to learn to become a meteorologist.  I earned a bachelor’s and master’s degree in meteorology.  During that time (six years), I learned so much about the atmosphere, but also quite a bit about math and physics (essentially the science behind the forces that make things move).
Question #5: What is the scariest weather event you’ve ever covered?
Answer: The scariest weather I ever covered was in Arkansas.  I was in a van late at night with a news photographer in the middle of a thunderstorm near a hill.  We were waiting for a tornado to come up and over the hill, so we could get video of it.  Fortunately, it never formed….or at least not near us.  Honestly, in retrospect, that wasn’t a very smart move on our part.
Question #6: What’s your favorite type of cloud? Have you ever seen a hole-punch cloud?
Answer: My favorite type of cloud is cumulonimbus.  No….I’ve never seen a hole-punch cloud.
Question #7: How is the weather in Tennessee? How is it different from NH?
Answer: Weather in TN has similarities to and differences from NH’s weather.  Weather in TN gets very hot….we usually climb over 100 degrees at least once each year…and in some years 5-10 times.  It also, surprisingly, gets very cold.  We’ve gotten down to 4 degrees twice this year in Nashville.  The all-time record low temperature for Nashville is a shocking -17F.  SO….like NH, it gets hot and cold.  However, the summertime here in TN is very hot throughout.  We’ll have 45 days in the 90s, for example.  NH will have closer to just 10.  The winter here brings less snow and while it gets cold, it’ll be cold for just a few days and then warm back up to 50 degrees.    So, we’re more often cool in the winter, than cold.  Meanwhile, NH is more often cold in the winter, and just occasionally cool or mild.
Question #8: What is your favorite weather instrument?
Answer: My favorite instrument is the anemometer.
Question #9: What’s your favorite part of being a weather man? What is your least favorite part?
Answer: My favorite part of being a tv weatherman is being able to help all who watch me plan their days ahead – how to dress, whether to go to the lake to cool off, etc.  My least favorite part is that sometimes my voice is a little weak (had that a lot lately, being sick) or I don’t feel up to it, but I still have to go on television and do my weathercast and come across as the same person to everyone at home, night after night.  It can be challenging.
Question #10: What is it like to be on TV? Do you cover storms outside?
Answer: Being on tv is a lot of fun, but honestly, I don’t think much of it anymore.  It’s automatic…sort of like you tying your shoe.  You probably don’t think much about it anymore because you’re getting so good at it.  I seldom cover storms outside these days.  I used to do it a lot more.  Our photographers and reporters do that, mainly.
Question #11: Have you ever checked out the weather in another country?
Answer:  I have checked out weather in so many other countries.  The United States’ weather is my favorite though!
Question #12: Have you ever chased a storm or been inside a storm chasing truck? Do you know any storm chasers?
Answer:  I have.  See #5 above.
Question #13: What states have you been a meteorologist in? Which one was your favorite?
Answer:  I’ve been a meteorologist in PA, GA, OK, AR, LA, and now TN.  I’d have to say being one here in TN is my favorite!  You get all kinds of weather here, except hurricanes.
Question #14: Were you ever scared of thunder and lightning as a kid? Do you have any tips?
Answer: I was never scared of lightning and thunder more than anyone else.  Of course, if I saw a flash of lightning, my natural reflex would be (and still is) to duck.  That’s normal though.  If you are or you know someone who’s scared of lightning and thunder, know that thunder won’t hurt you (except perhaps your ears if you’re very close).  It’s just sound.  Lightning is the frightening part, since it could harm you if you’re struck.  SO….if you respect it, you’ll likely stay safe.  Know what to do when lightning is in your area….and do those things to keep yourself safe.  Then, you won’t have to worry!


This was my very first interview. I hope to do more interviews. I want to thank Dan Thomas for answering all my questions. I sure learned a lot!