I know that I will miss so many things about these early years of motherhood but this I know: I won’t miss the whining. 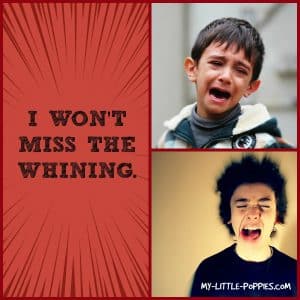 A couple of weeks ago, we had a library whining situation. The afternoon had started off nicely, so this whining situation was unexpected. The library was essentially empty, and all three of my kids were content. They were happily – and quietly– filling their bags with books. I thought it would be the perfect time to get T, who is now a rock star reader, her very first library card.
It’s funny how perfectly calm afternoons can turn into chaos in a moment. That’s just what happened. T, overjoyed at this news, announced the plan to her brothers. Seuss had a quick intake of breath and then proceeded to jump for joy with his sister. Leo, however, was not impressed. “Where is my library card?” he inquired.
Leo loses everything. He loses socks while he is wearing them, pencils while he is using them, paintbrushes while painting, and books while he is reading them. I am not exaggerating on any of those points, folks. Because of this, I have a mini library card on my key chain for him. So, when he asked where his actual library card was, I replied as I always do, “I have no idea, but I have one on my key chain.”
Enter the whining. I will miss many things when I look back on these early years of motherhood but I am quite certain that I will not miss the whining.
T and I did our best to ignore it while filling out the necessary paperwork. T was beaming and I smiled back. This was a big day. I can vividly recall the day I got my first library card. I told her about that day, and then I told her about the day we took Leo to get his first library card.
“But MY library card is miiiiiiiiiiisssing,” he bemoaned, falling dramatically to the floor.
“Congratulations, T!” the librarian said as she handed T her library card. In an instant, Leo was on his feet and in T’s personal space, examining the new card.
“That library card is NEW. It has a NEW DESIGN. It looks WAY BETTER than my card. My card that is MISSING!” he exploded.
“Leo,” I warned, “I am not getting you another library card today. I have one for you on my key chain–“
“–WITH AN OLD DESIGN! YOU HAVE AN OLD ONE! IT’S NOT FAIR!” He fell to the floor once more.
Clearly, this was our cue to vacate the premises. “C’mon guys, let’s go home” I said, stepping over my almost 7-year-old.
Seuss marched up ahead with T in his wake. She had her new card in her palm and she was beaming. It was clear from her face that she was not letting her brother’s shenanigans rain on her parade and for that I was grateful. I let the younger two walk a bit ahead of me while I waited for Leo, who was now stubbornly crawling toward us. When they reached the library foyer, Seuss and T could see an elderly woman, arms loaded with books, attempting to open the door. Seuss quickened his pace and opened the door, holding it open for her like a little gentleman. My heart swelled for we have talked about doing this before but this is the first time I witnessed him independently hold the door for a stranger in need.

“Oh my!” the woman smiled. “What a helper you are!” As she said these words, a bookmark fluttered from her arms to the floor. T scooped it up and handed it to the woman with a smile.
The woman thanked T and then turned to me and said, “Nice job, Mom! You don’t always see polite kids like these nowadays.”
I thanked her and then added, “You might change your mind in a second.” The woman looked puzzled for a second until she noticed the almost seven-year-old slowly approaching. He was now doing some sort of Quasimodo routine, all hunched over, feet dragging. And he was still whining.
The woman burst out laughing, winked at me, and said, “Well, we all have one!”
You know what? I bet she doesn’t miss the whining, folks.
Tell me… do you have “one”? Will you miss the whining when this season of motherhood has passed? Share your stories here.
***
What you’re supposed to do when you don’t like a thing is change it.
If you can’t change it, change the way you think about it. Don’t complain.
~Maya Angelou, Wouldn’t Take Nothing for My Journey Now
***