Have you ever wondered how to encourage a reluctant writer? Earlier this year, Leo went through a “reluctant writer” phase. This phase was fascinating to me because Leo has always loved to write. I’m convinced he actually taught himself to read through writing, as he used to meticulously copy his favorite books (both words and illustrations) at the age of three and four. Throughout this anti-writing phase of his, Leo continued to leave notes, letters, and the beginnings of books all over his room. However, if you were to ask him to write something during this time- anything, even just a signature on a card- you were met with anger and resistance. I believe the phase started when our occupational therapist added a fine motor component to his services. Leo is capable of writing beautifully, but when writing quickly his letters become messy and are often formed bottom-up, a big no-no in the education world. Leo balked at this writing instruction; for the first time writing was seen as work and not pleasure, and he resisted writing with all his might. The anti-writing phase began in the spring and continued throughout much of the summer. 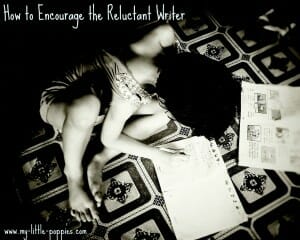 I did not pressure him to write during this phase, but I did present fun opportunities for writing. I made sure that paper and writing utensils were easily accessible at all times. I also purchased gel pens in a wide array of colors. This was a trick leftover from my school psych days– it’s tough to resist writing with a gel pen; kids find them incredibly fun. I also gave each of my little poppies their very own notebook. We would often write little notes back and forth to each other in these notebooks. Leo resisted initially but then saw how much fun T and Seuss were having and he started writing to me, too. I also attached small marker boards and dry erase markers on the kids’ bedroom doors. This was a huge hit and they continue to leave notes for each other throughout the day, months later. Also, it’s important to remember that not all writing requires a pencil and paper: make use of the computer! I would often ask Leo if he wanted to e-mail a loved one. Plus, I’ve mentioned before that he had a blog before I did. He was often inspired to blog about some craft or idea that he had, and he continues to do this to this day- in Leo’s Lounge! I also presented Leo with the Draw Write Now bundle and, as a little artist, he adored it and completed almost every book very quickly. Another great trick was enrolling him in NaNoWriMo– folks, he loved it! But, the very best strategy I drummed up for making writing fun was setting Leo up with a pen pal. He loved having a pen pal so much that, within a matter of weeks, he had several pen pals and he continues to write to each of them regularly. Who doesn’t love to receive a hand-written letter? Leo currently corresponds with a friend’s 12-year-old son outside of D.C., a fellow profoundly gifted 6-year-old in Nevada, a gifted friend from Singapore (we connected through the Hoagies’ Gifted Education Page), and a family of five living in Tanzania! Writing and receiving letters from pen pals builds language skills, social skills, friendship, and it’s also a great way to work in some geography! 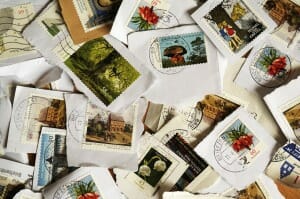 Today, Leo received a very special package from my friend Lisa, who is currently living in Tanzania with her husband and three beautiful children. He was over the moon! 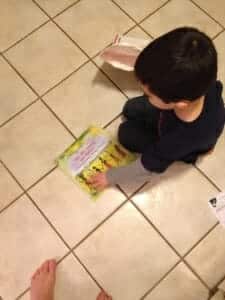 I wish that I had recorded him opening it because his running commentary was absolutely adorable and his excitement was palpable!

Lisa sent Leo a lovely book called We All Went on Safari. The book is a beautifully illustrated counting story that includes many Swahili words. After he had read the sweet notes contained in the package, Leo retired to the couch where he read the book in its entirety to his brother and sister, who listened with rapt attention. I think it’s fair to say that we already love this book more than just “kidogo” (“a little bit” in KiSwahili). 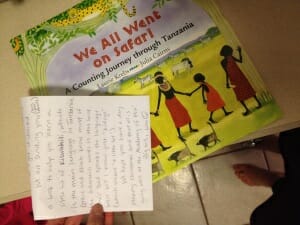 Today’s post is a shout-out to all of Leo’s amazingly thoughtful penpals. Thank you all! I credit each and every one of you with helping to restore Leo’s love of writing. We are so grateful!

How do you guys encourage your reluctant writer? Share your ideas and tips here!

Happy Friday, everyone! We hope you have a wonderful weekend!

~ Swahili phrase (roughly translated to “there isn’t a problem/trouble”)