When I started this blog, I promised my friends that I’d share the good, the bad, the funny, and the ugly of homeschooling. Homeschooling isn’t all sunshine and roses, folks. Well I’ve got some ugly to share with you today! We’ve encountered some homeschool challenges recently, and it hasn’t been pretty!

First, a little bit of background:

Homeschooling has been far easier than expected and it has also been incredibly fun. It is enjoyable because Leo is learning what he wants to learn, rather than something he’s been told he has to learn. I haven’t been “teaching” much at all. In fact, I often feel as if he is teaching me. I have learned an incredible amount of information, much of which I’m sure I “learned” at some point years ago but then promptly forgot once I’d passed the unit test. Now, believe me it’s not all sunshine and roses over here. I said learning with Leo has been both fun and easier than expected. I did not say living with Leo is always fun and easy. He challenges my patience multiple times daily. Those who know us in real life are fully aware that Leo has strengths and weaknesses, and while I haven’t had to under-arm him out of a public place lately, it does happen.

Well, recently the fun-homeschooling-Leo morphed into the under-arming-out-of-public-places-Leo while working on math. Math! He loves math! Because it’s one of his favorite subjects, he dabbles in a lot of different math sources including Khan, Beast Academy, Life of Fred, Alchemy, Singapore, Zaccaro, some logic, etc., but Leo loves EPGY math. I think EPGY does a very thorough job of covering a wide array of math topics, although I personally find the program quite dry. Leo, however, enjoys it and chooses to work on EPGY math and language arts almost daily.

Well, a couple weeks ago, EPGY started giving him problems like this one: 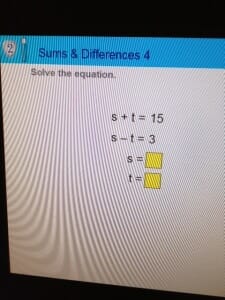 There should be audio of Leo pitching a fit along with this photo.

Leo did not like this problem. Up to this point, math had been fun for him. He solved all problems mentally, and he rarely required assistance. The above equation, and the problems that followed (which contained larger numbers) taxed his working memory. I suggested that perhaps he use a piece of scrap paper to assist his memory. Drama ensued. I calmly tried to show him how I tackled such problems. More drama. He did not want to listen to me. He did not want to use paper to solve math problems. And yet, the very next day, he wanted to do EPGY again. When faced with one of these equations, he’d hit enter thirty-seven times in a fit of rage so that he’d get the problem wrong and go to the next one. But, minutes later… 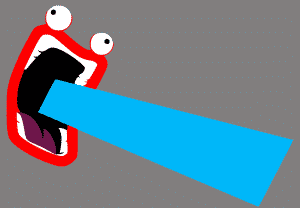 “WHY DOES THIS STUPID EPGY GUY KEEP GIVING ME THESE STUPID EQUATIONS?!?!”
I explained to him, not for the first time, that EPGY uses an algorithm and that you can’t pull one over on the EPGY Guy by hitting enter thirty-seven times in a fit of rage. Drama. I showed him some Khan videos about solving equations. Drama. One day, Schizz was home and the two of them worked on the problems using a white board. We thought we were making progress but… you guessed it, more drama. And yet, each day he asked to do his EPGY. 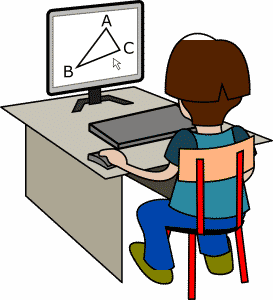 Yesterday afternoon, following the daily dose of EPGY-induced dramatics, I tried something new. I reached out to my village. I’ve mentioned my beloved village before. Recently, I expressed how thankful I am to have met even more village folk through this blog and several other online sources such as Gifted Homeschoolers Forum, Hoagies’ Gifted Education, and a couple other gifted communities. Well, the new village folks made me smile this morning.

I presented the EPGY drama to the village, and I got some great advice from multiple people. Then, a fellow mom of a gifted learner offered her assistance. This mom also happens to be a mathematician. She gave me a lot of helpful advice, including one gem in particular. She simply stated that even though she’s a mathematician, she sometimes needs to use a scrap of paper, or even her fingers, to help out her working memory. I read her response to Leo. He beamed.

And then he did this:

And then he did a bunch more all with a smile on his face. And, do you know what? When the EPGY Guy was satisfied and moved on to a different topic, Leo pitched a fit!! He wanted more of the dreaded equations because they were now so much fun. 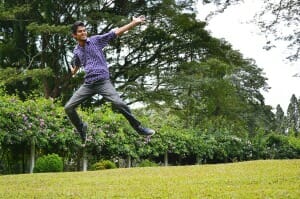 Wahoo EPGY guy!
Zero to sixty, that child. So, there it is… a little bit of ugly for you, folks. Many thanks to my ever-expanding village!
What about you guys? Have you had an recent ugly moments? Any homeschool challenges? How have you dealt with them? Share your stories here.
***
Schools have not necessarily much to do with education…they are mainly institutions of control where certain basic habits must be inculcated in the young. Education is quite different and has little place in school.
~ Winston Churchill
***