As I sit here, five years into homeschooling and ten-plus years into this parenting gig, it’s easy for me to identify all of the characteristics and traits that have become such a part of our lives and our family story. Early on, we were new parents. We were far too sleep deprived and too in it to recognize any of the signs. Giftedness was not on our radar. At the time, we were so concerned with getting him to calm, to sleep, to eat. We had no idea that the difficulty we were having with those most basic needs might be related to something else. And, later still, once the signs became more apparent, we ignored them so that we wouldn’t come across as That Parent. That is, we ignored them until we couldn’t anymore, until it became obvious to others.

And then we ended up suddenly, unexpectedly, homeschooling and everything began to feel lighter. But, the beginning was so hard! 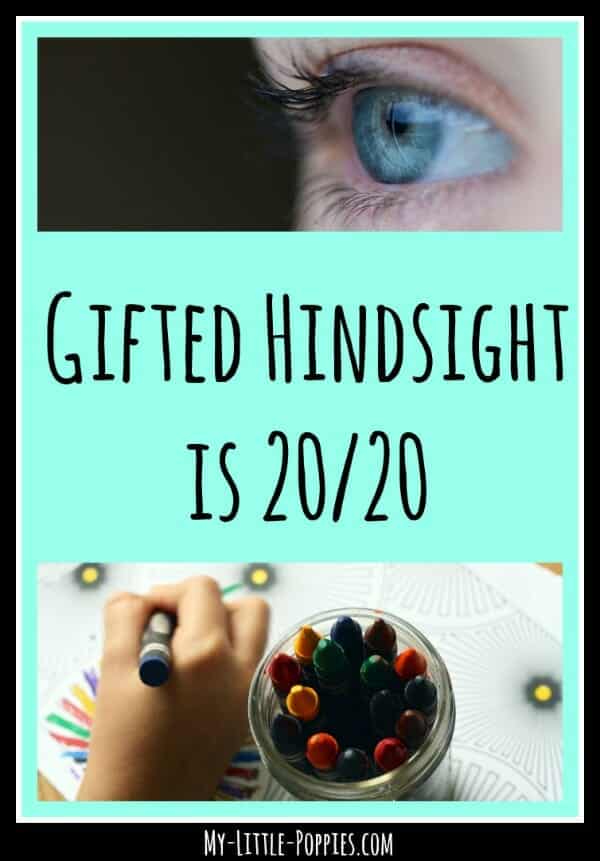 Leo could lift his head within hours of his birth. I can recall the pediatrician coming in to check his vitals that first day or perhaps the next morning (it was such a blur), and Leo immediately starting screaming and arched his back and almost rolled. The pediatrician laughed and said, “Watch out, this one has spirit!” Boy, was he right! 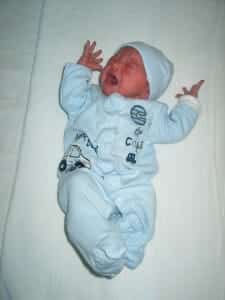 This is Leo the morning we left the hospital. Yup, the kid had spirit. He still makes this face, folks.

Later, he could not be put down. The bouncy chair, exersaucer, swing, stroller, car seats, bumbo- those were akin to torture devices for Leo. He’d scream before his little body was even in the thing. 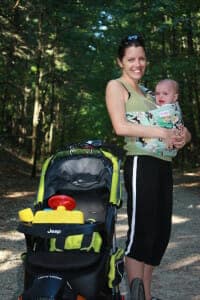 The family that purchased this stroller from us off of Craigslist got a great deal, folks. The child would NEVER ride in it!

He has always had a set of lungs on him like no other. He would cry for hours in the car. We stopped going anywhere that required any distance because we couldn’t take it, it was heartbreaking and beyond stressful to travel with him. This is a photo of us at Cape Cod that first 4th of July. I’m still recovering from that three-hour ride, folks! 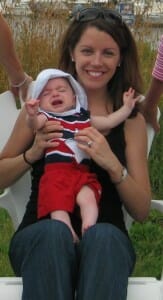 I have SO MANY photos of us like this.

I’ve mentioned before that Leo was diagnosed failure to thrive from approximately six months of age until he was just shy of three years old. Therefore, he was a tiny little person and looked much younger than his chronological age. Yet, he spoke in perfect sentences and asked amazing questions. I thoroughly enjoyed his questions, folks, but I’m ashamed to admit that they embarrassed me in public. I cannot tell you how many times we would be in Market Basket or Target, doing our thing, only to have a stranger ask, “How OLD is he?!” and then an awkward conversation would ensue. It happened all the time in those early years. 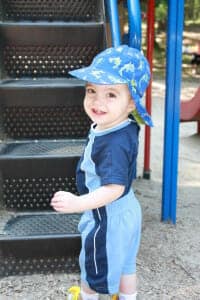 Yes. If he is paying attention, he’s always been able to learn something of interest to him after the first presentation. As a baby, he would memorize entire songs very quickly and sing them nonstop for days on end.

Oh, yes. I remember when he was just two years old, he was worried about death. And then, at three, he was terrified of extinction.

Yes, yes, yes. When Leo was two and three years old he was obsessed with puzzles. He would come down each morning and do a gazillion of them before he would eat his breakfast. And he did them quickly, too. 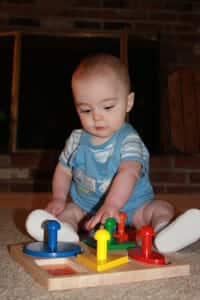 This was the first of MANY puzzles in Leo’s seven years.

Leo wrote before he could read. He used to make his own books or copy the words and illustrations of his favorite books. One day, when he was four years old, he woke up from a nap and read an entire book to me. For real. The first time I realized he could read, he read an entire book. That, folks, was when we first started talking about the g-word around here. 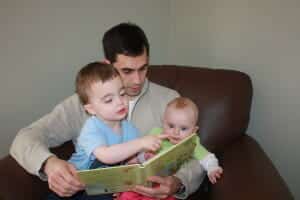 Anyone who knows Leo in real life is laughing right now. Yes, yes, yes… in a big, huge way. 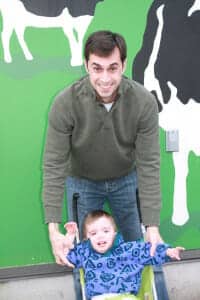 We have so many happy vacation photos like this one here.

The child could not [successfully] watch television until he was six years old. I could go on and on about the sensory sensitivities that we dealt with for many years, and continue to struggle with on occasion to this day, but I’ve already done that on this site. To say that Leo is sensitive is a huge understatement.

As I was looking for photos for this post, I came across this one. Talk about hindsight being 20/20. On this day, my friend Maria came over for a playdate. I don’t remember why, but she was testing a luggage-weigher thingamajig and we put Leo IN IT because I always knew how much my FTT babe weighed at any given moment. Look how CALM he is there, folks! Any SPD parent will appreciate this photo. He found a safe little spot and I’m sure the weighing action provided deep pressure. I remember he was so calm that we actually left him in there for a bit as we chatted, occasionally giggling about the fact that my child was snuggled in a tote bag.

Oh, heck yes. Worried about overcrowding and its impact on certain animal populations? Fear of war? Concern over the ozone layer and pollution? Let’s just say we don’t watch the news around here yet.

When Leo is reading or building, you can stand beside him and holler his name and the kid does not flinch. 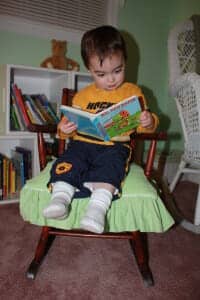 I bet if you had tried to call his name here, he wouldn’t have heard you. I know that look. 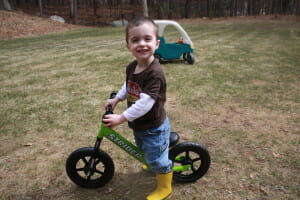 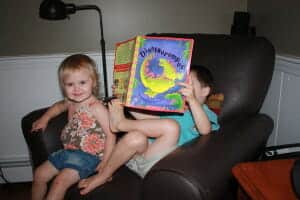 This was the DINOSAUR (and Dinosaurumpus!) phase.

From day one, folks! Again, those that know him in real life are laughing at this one.

He is a square peg, he marches to the beat of a different drummer, he thinks outside the box. Experiments? You mean like the time he was two and he dismantled his radiator? Or how he could break out of any child-proofing device? How he could climb out of his crib before he could walk? Like how he risked Christmas morning in a quest to determine if his Elf on a Shelf was real? Like his latest interest in wizardry that has resulted in my finding containers of colored liquid all over the place? Um, yes. 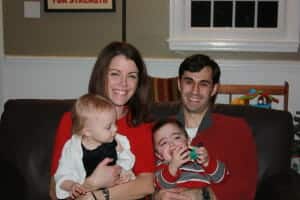 This was THAT year. The Edgar year. Meeeerry Christmas!

Leo is always creating or inventing or planning something, and often he has several things going on at once. 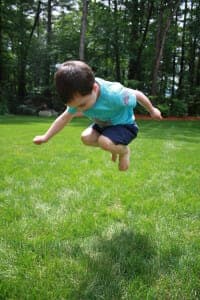 Yes, and God help you if you don’t think that his idea is awesome!

Oh my, yes. When Leo was younger, before he could read independently, any time someone would walk into our home he would accost them with a book. “Can you read to me???” he would plead until they relented. Again, and again, and again. Yes, we can barely keep up. Thank goodness for our local library!

Yes. His love of learning and independence helped with our transition to homeschooling.

Yes. Perfectionism and frustration related to it have been long-standing issues over here.

If I could just go back…

I wish I could go back to that sleep-deprived new mother, who spent the early days pacing the floors- day and night- with her crying baby. I wish I could talk to that mom who spent every waking hour of those early years trying every trick in the book to squeeze calories into her son only to watch him burn them off immediately. If I could connect with that exhausted, worried mom, I’d hug her. Then, I’d take that wailing baby from her arms and tell her to take a nice, long, steaming hot shower. I’d brew a pot of strong coffee so she could have a cup when she emerged. Before handing her the cup, I’d crack a joke about the fact that she was still rocking and swaying- even without the baby in her arms- and she’d laugh about it. I’d tell her to sit and enjoy that cup of coffee while it was still steaming. As she drank, I’d bounce and shush that sweet, red-faced boy, and I’d tell her that she was doing an amazing job as a mom. She’d start crying into her coffee while I told her that everything is going to be okay. I would be honest and admit that while it would never be easy, it was going to get much, much easier, especially once that little guy could read independently and entertain himself a bit. And I’d assure her that her little boy was anything but a failure to thrive. 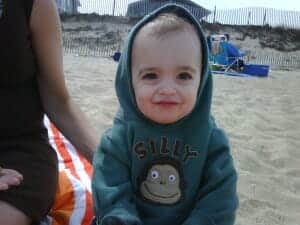 See this kid? The one with the watermelon all over his face? This was the failure to thrive kid who would ONLY eat watermelon all summer long, much to the chagrin of the many specialists we saw in those early years. He’s doing juuuust fine, folks. And so is his mom.

Giftedness is a wild ride. Once you realize what it IS (ignoring all those gifted myths out there), and embrace it, it gets easier. I’m thoroughly enjoying this rollercoaster of a ride, with all its many ups and downs and twists and curves. I wouldn’t change it for the world. For those of you just starting out on this journey, you may want to take a look at some of my favorite books and resources here and here. And, if you’re just starting out, be sure to find a community of parents with kids like yours. Believe me, they exist. You are not alone. 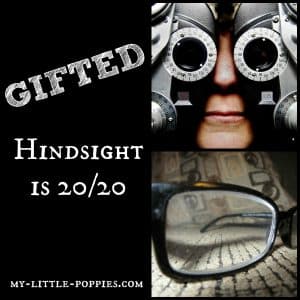 What about you guys? Where are you on this gifted journey? What has been the most difficult gifted age and stage for you thus far? Have you discovered your own giftedness? You know that proverbial apple? It does not fall far from its tree, folks! Do you see the way giftedness runs through your extended family? Share here! 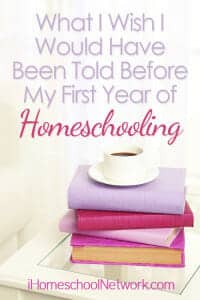 This post is part of the Gifted Homeschoolers Forum April 2015 Blog Hop Gifted at Different Ages and Stages. Click the image below to hop to more posts on this topic from some amazing GHF bloggers! 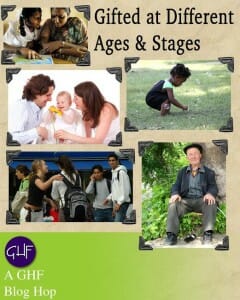 Wouldn’t take nothing for my journey now.