I am often asked for tips and tricks for gameschooling with a big family. I have three kiddos very close in age and so I do not feel equipped to answer this question. Thankfully, I have a bunch of gameschooling friends with multiple kiddos at many ages and stages.

Today, I’d like to welcome June Doran. June loves deep discussions about homeschooling, parenting, and minimalism. When she’s not homeschooling, decluttering, or blogging at This Simple Balance. June is about to have five kids under 9-years-old and so she knows a thing or two about this topic!

Without further ado, I’d like you to meet June. She has some great tips for gameschooling with a big family! 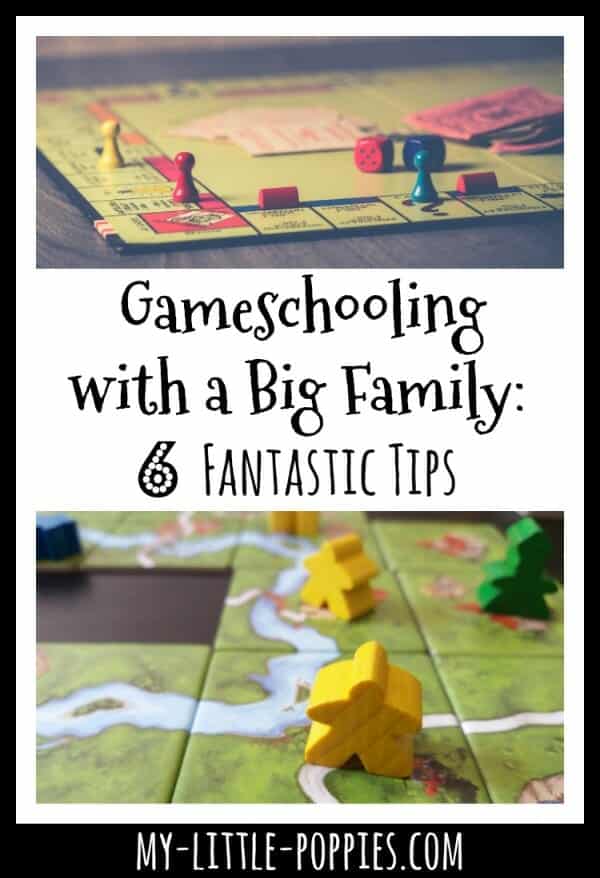 Only in the past year has gameschooling become a core part of our homeschool. While my oldest (a girl) enjoys playing board games, my second born – a boy – absolutely loves to play games.

Even though he’s a reluctant reader and has been slow to warm up to reading aloud, he asks to play games almost every single day. Earlier this year, thanks to Cait’s gameschooling inspiration, I started to realize that I could capitalize on the one thing he was actually asking to do.

I started to build our game collection, both with blatantly “educational” games and classic games that offered just as legitimate learning opportunities.

Yahtzee, for example, isn’t often thought of as an educational game. Oh, but it is! Yahtzee gives us a chance to practice multiple digit addition, logic, and dipped our toes into the waters of probability. So much rich learning happens in one little game.

As I worked gameschooling into our homeschool routine, I quickly realized that gameschooling in a big family was complicated. We have four kids, soon to be five, with ages ranging from 9 down to almost 3 (with a baby due in two short months).

As you can imagine, gameschooling can be more than a little challenging with all those ages and stages! Over the past few months, here’s what I’ve learned about gameschooling with a big family. It’s far from perfect, but it has definitely gotten better as I’ve followed these tips.

6 Fantastic Tips for Gameschooling with a Big Family

1. Occupying the toddler is priority number one.

Most big families trying to gameschool encounter the problem of the toddler.

Oh, toddlers. They are so delightful and cute, yet so utterly destructive at the same time. We use a variety of strategies to work with our cute little guy as best we can.

When trying to gameschool with a big family, making sure the toddler doesn’t destroy everything will probably be your biggest challenge. Some days your efforts will pay off, but there will still inevitably be days where games get completely destroyed by said toddler.

Try to laugh it off (and teach your kids to do the same). 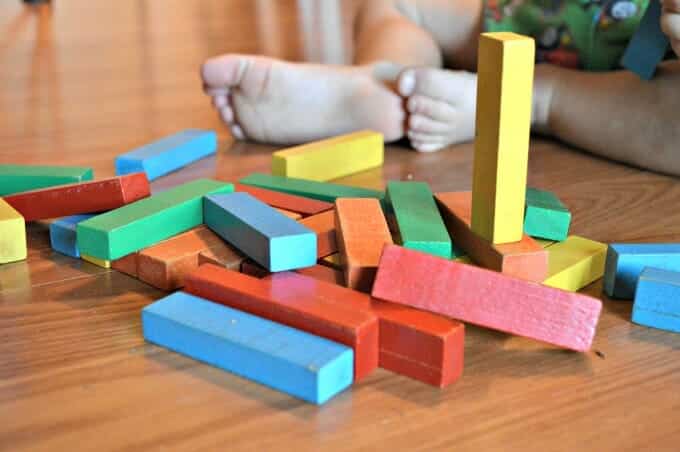 2. Balance group games with one-on-one games for the sake of the introverted child.

We have one child who is extremely introverted. He’s the one who can go into his room and play with LEGOs for hours.

He also happens to be our third child born after two kids with very strong and dominant personalities. Did I mention he’s emotionally sensitive, too? And that losing games is extremely difficult for him?

All of those qualities can make gameschooling complicated.

Ideally, we’d be able to play all games together, but sometimes, he just needs to play a one-on-one game with mom. Amazingly, when we play one-on-one, he handles losses much better, both in the one-on-one game and the group games that happen in between. He simply cannot always handle group games, and that’s o.k.

His siblings, particularly his older brother (the one who loves games), often protests being “excluded”. Those protests used to sway me. But now I turn it into a discussion about personality differences and taking turns getting our needs met. 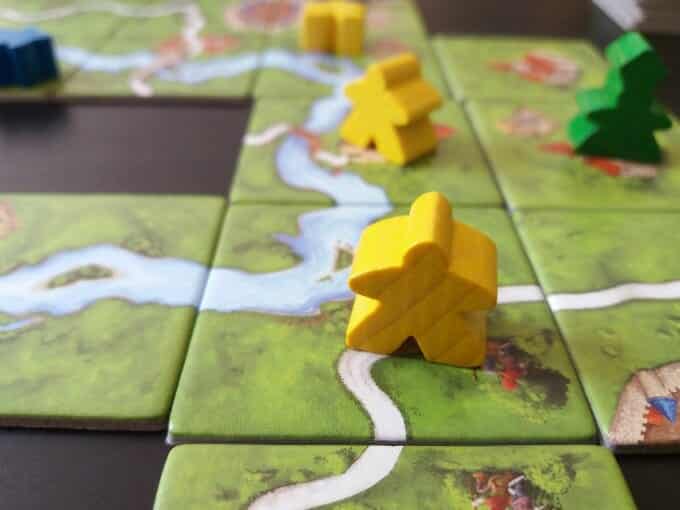 3. Don’t be afraid to modify the rules.

If your personality is at all like mine, altering the rules in any way kind of freaks you out. Unfortunately, I’ve passed on my love of following the rules to my kids, particularly my oldest. This, of course, came back to bite me when I attempted to modify certain rules for the youngest two in our family.

In the past few months, I needed to undo my strict teachings about following the rules in order to accommodate the extreme age differences. In Uno, for example, we give a little grace to our youngest players to remember to say the phrase, “Uno!”, when they only have one card left. Younger kids definitely get help in Ticket to Ride – help with reading, choosing routes, being able to change a move with advice from mom.

The hardest part is explaining to the older kids why we bend the rules for the younger kids: because it’s just no fun to lose all the time! We don’t modify the rules in every game, but we do in a good number of them.
You know your kids. Modify the rules depending on personalities and sensitivities.

Because, really? Games are no fun when you lose all the time and feel behind your older sibs in just about everything.

4. Consistently train older children how to give grace to younger children.

Our most difficult gameschooling participant at this point is our toddler. When he does play games with us, he pretty much never follows the rules (see tip #1).

Even though this has been happening for months, I still need to remind my other kids, “He’s a toddler. It doesn’t matter if he follows the rules or not, as long as he’s happy, feels included, and isn’t wrecking the game for the rest of us.”

Even with our best efforts, occasionally, the toddler will get bored and destroy the entire game. Teaching my older kids to laugh it off and understand that he won’t always be this way has been just as valuable a lesson as all the purely educational ones combined.

Big kids who understand how to give grace to littles are few and far between.

I used to believe that part of my job as a parent was to train my kids NOT to quit. “You need to finish what you start,” was my constant refrain.

But then I realized that our time is valuable, too valuable to waste finishing things we are truly done with. That goes for books we aren’t crazy about and games everyone is mutually done playing (Monopoly three hours later, anyone?).

While I am o.k. with not finishing games occasionally, if one or two kids want to keep playing, I do encourage the others to stick with it.

But if everyone agrees to be done, I let it go and realize that they do finish the majority of the games they start. 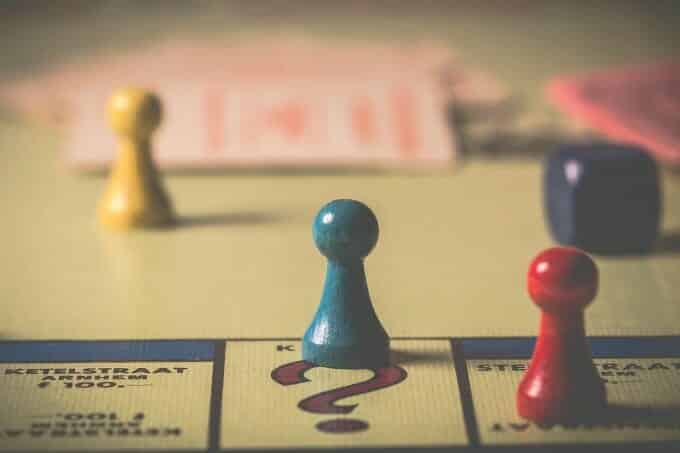 6. Be patient with angry, mid-game tantrums.

We’ve had multiple games where one kid or another will have a meltdown about losing, missing a turn, or just about anything else. That child will storm off, leaving the rest of us sitting around the game wondering what to do.

Games are just as much about learning how to deal with difficult situations and disappointment, as they are about educational learning. Use these situations to develop patience in both yourself and your kids.
Give the offending child a chance to cool off. Don’t simply carry out without him. Give him some grace and time to pull it together and decide whether or not he wants to finish the game. Nine times out of ten, he’ll finish.

As kids get older, things get easier. The older kids can play more and more games on their own, while you take care of the younger kids.

There is less board flipping and fewer tantrums.

Just because it’s difficult and stressful at first doesn’t mean gameschooling isn’t worth doing. I am SO glad I made an effort this year to prioritize games, to see them as just as valuable as math or writing or reading. They have so much to offer your kids, so don’t let the complications of a big family stop you.

Gameschooling is most definitely worth it. 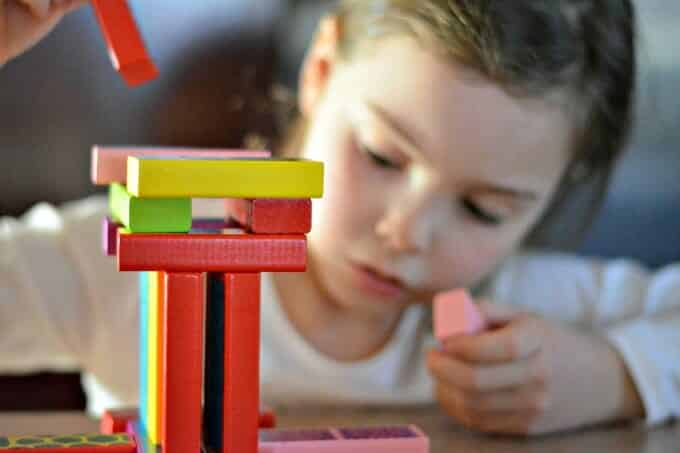 Be sure to check out these other popular articles from This Simple Balance:

This post is part of a “Gameschool Voices” series…

Read other posts in the series here: 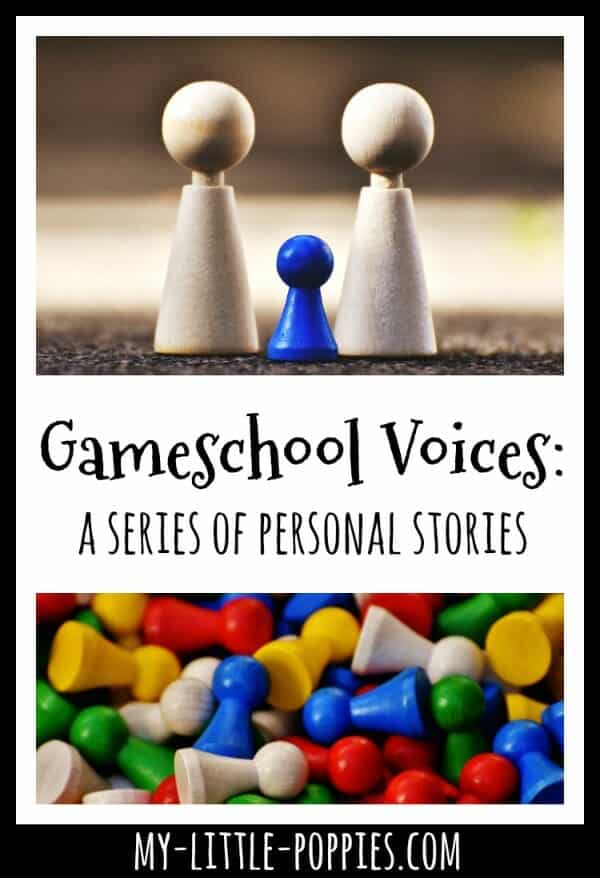 Do you love board games, too?

Check out these related posts:

Now, it’s your turn. Tell me: Do you have tips for gameschooling with a big family? Do you have multiple ages and stages at home? Share your tips here!