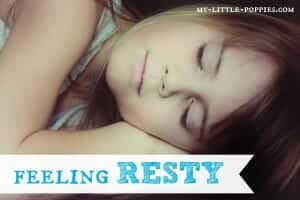 And, when you add some fatigue into that three-year-old equation? The result is disastrous.

Leo and T napped until their fifth birthdays and they still nap on occasion. It’s part of the reason why I am a huge advocate for quiet time around here: my kids have always needed it.

Enter Seuss, the pants-hatin’ polar-opposite to everyone else in this family. He’s an extrovert in a family of introverts and a night owl in a family of early birds. Whereas my other two could take a nap and then fall asleep at 7 pm, Seuss roams the halls until well past 9 or 10 pm. While his brother and sister are sleeping, Seuss goes on adventures, sings songs, tell stories, and constantly descends the stairs to ask “very important questions” of his tired parents. And, come morning, he is awakened by his early bird siblings.

Burning the candle at both ends is not helping with the three-year-old behavior.

We are struggling with epic tantrums of the three-year-old variety. Tantrums that are void of reason and that can last hours.

His granola bar broke in half.

His bedroom doesn’t have a bunk bed.

He doesn’t want to wear pants.

He drank all of his juice but doesn’t want a little bit more.

Sleeping is boring and unfair.

He wants to be five.

We’ve been experimenting over here. We’ve tried alternative quiet times, using audiobooks or SKYBRARY. We’ve tried to wear the kids out at the pool all afternoon and go to bed early. We’ve tried only napping a few times a week. We’ve been encouraging him to head up to his room to snuggle with his monkey when he can’t stop crying, to help himself calm down.

Nothing we’ve tried has stuck… yet. We’re a work in progress over here.

The other day, Seuss came up to me to snuggle with me on the couch. I put my arm around him and he burrowed his sweet little noggin into the crook of my arm.

Resty. What an adorable word! It’s a perfect description for how we are all feeling during this time of three-year-old transition and turmoil. Resty also reminds me that this is a short season. Before I know it, this phase will have passed and I will miss it. So, I’m determined to grin and bear it. I’ll try to savor these last magical drops, even as I under-arm my three-year-old out of public places.

Tell me, folks. What adorable words have your children invented? How do you deal with three-nagers in your home? What do you do on those RESTY days? Share here!