Everything is feeling lighter to me lately: parenting, homeschooling, even the holiday chaos. When I think back to this time last year, everything was just…well… heavier; life felt more challenging and stressful. What changed? In some respects, everything has changed. 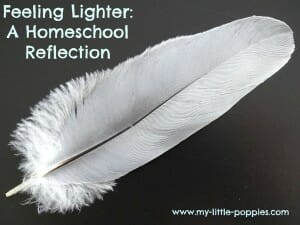 Certainly the decision to have Leo assessed was the catalyst, as the results indicated that our son was an outlier among outliers, a profoundly gifted, twice exceptional boy with varying degrees of every single one of Dabrowski’s overexcitabilities. The testing gave us the courage to make decisions that felt extreme and yet entirely appropriate. Removing the traditional, brick and mortar school from Leo’s life restored both his smile and his passionate, joyful learning. Blogging about the journey has connected me with innumerable people, organizations, research, and resources. These connections have helped me to grow as not only a homeschooler and a mother, but also as a person. And I think that is the crux of the whole feeling lighter thing: some of the most profound changes this year have been within myself. I’ve learned so much, not the least of which is learning to let go of more.

I often say that Leo is “a tornado full of boy” and that he has always been more. If I’m being completely honest with you, I have to admit that we knew he was more before the testing. In fact, part of me knew he was more even before he even entered this world. When I was pregnant with Leo, I had insulin-dependent gestational diabetes. As a result, I was in my OB’s office quite a bit. In short time, in-utero-Leo began to have quite a reputation among the office staff. First, there was the fact that I could feel him moving way earlier than any of The Books said you should. This worried me as a first time mom and I actually called the office and spoke to a nurse about it at 13 weeks. Then, there was the fetal doppler heartbeat checks. Whenever the doppler was placed on my belly, in-utero-Leo would immediately give it a swift kick, resulting in a loud THWAP! and giggles from the nurses. It became a running joke, and the nurses would actually gather around to watch it happen during my appointments. “Oh he has spirit!” they’d laugh (little did they know!). Then, there were the NSTs (fetal nonstress tests) which were required during the last trimester of my pregnancy. NSTs monitor the baby’s  heart rate during rest and movement. They are noninvasive, the hardest part for many is just waiting for the baby to kick enough times so that you can get off the machine and go home. Whenever I came in for an NST the nurses would always say, “I’m not even going to leave this room!” I was in and out in record time. The only thing that ever slowed us down was when in-utero-Leo kicked so strongly that the monitors required readjusting. My favorite story about my pregnancy with Leo, however, took place in the delivery room. I ended up having a cesarean section and I was forewarned that, because of my gestational diabetes, the NICU team would be present. I was also warned that there was a “good chance” that Leo would need to go straight to the NICU for monitoring, that it was standard protocol, and that I shouldn’t worry too much about any of it. As it turned out, I didn’t need to worry about any of it, for Leo had other plans. Leo entered this world with a blood curdling scream and proceeded to urinate on the head neonatologist and the waiting NICU staff in his first second of life outside the womb. Leo scored 9s on his initial Apgar Test and 10s on the repeat, which the neonatologist told us was “practically unheard of” for a GD baby following a cesarean. Having Leo assessed provided us with an explanation, but we’ve known for a long time that he was different.

Leo was born this way.

I think that, as parents, we worry so much about what everyone else thinks about our children. We’re all familiar with the saying, “Children are a reflection of their parents” and in many ways the saying is true. Children will learn a multitude of things from their parents: values, manners, kindness, faith, social skills, friendship and empathy, gratitude, and various habits (whether it’s junk food or avid reading), among many, many others. But the thing is, children are not entirely reflections of their parents. Each child is a unique individual. Our job, as parents, is to love our children unconditionally, to love it all: the good, the bad, and the ugly. We are to love the child for, and in spite of, his or her uniqueness. Leo is a PG, 2E, and full of OEs kid. He could be the poster child for asynchronous development, as he has the intellect of someone more than twice his age but the emotions of a six year old. His behavior can often be embarrassing, and I’ve often spent those embarrassing moments wondering what other people were thinking. There have been so many moments in the past, while under-arming him the hell out of somewhere, when I have worried about his behavior reflecting poorly upon Schizz and I and our parenting. When I first started homeschooling and people would ask who Leo had for a teacher, I would pause before the words came out, and I’d worry about their reaction to or perception of homeschooling.

Over the course of the past year, I’ve been learning to let go of a lot of things: what I imagined my son’s education looking like, my understanding of learning and schooling, my thoughts on what a first grader “should be” learning, my perceptions of homeschooling. I’ve also had to let go of what other people think: what they think about Leo’s behavior, the concept of giftedness, homeschooling and homeschoolers, my parenting skills, socialization, traditional vs. nontraditional schooling… all of it. I might not always know exactly what I’m doing but I do know one thing: Schizz and I understand this PG, 2E, full of OE little guy better than anyone else on this planet, and we make decisions based on this knowledge. Our job, as his parents, is to love the heck out of him and help him to use his strengths while learning to manage his weaknesses. 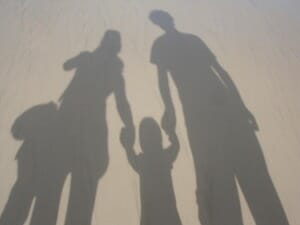 We are all doing the best we can with what we have, aren’t we? Aren’t we all just works in progress? Well, so is Leo. So yes, he might be more… more intense, more challenging, more demanding, more persistent, more emotional, more artistic, more energetic, more headstrong, etcetera, than his peers, but it is my belief that with maturity, modeling, and time, these mores are going to serve him well in life. Schizz and I will be there to support him through all of it, and to hell with what anyone else thinks about any of it.

This post is part of the December 2014 GHF Blog Hop: Parenting OEs, 2Es, and Everything in Between. Please click the link below to keep on hopping! 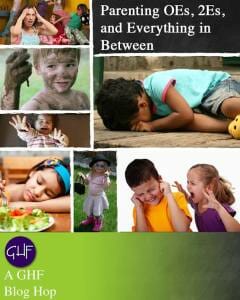 *As many of you know, I love quotes and usually end my posts with an old favorite. Tonight’s quote goes out to Leo, because he was born this way. When Leo was just two years old, the song Bad Romance by Lady Gaga was on the radio every two seconds. Leo, who had for months been singing Ba Ba Black Sheep every night, over and over, until he fell asleep, incorporated Bad Romance into his nightly routine. We called it the Ba Ba Lady GaGa Remix and it went something like this, “Ba ba black sheep, have you any wool? Yes sir, yes sir three bags full. Ba ba ga ga ga! Ga ga ooh la la!!”