I’ve been having some falter-filled days of late, folks.

The other day, it was one thing after another after another following a night of too little [and frequently interrupted] sleep. It was one of those days when you think the incessant bickering will send you straight over the edge. One of those days during which you count the minutes until bedtime. The kind of day when you check the clock and think to yourself, “How in hell is it only ten in the morning?!”

That’s exactly what I was doing when Leo handed me a note and walked away. It was a note that managed to both call me out on my parental shortcomings and highlight his emotional growth this year.  I felt at once extremely proud of him and sick to my stomach. I had faltered, failed him, and he knew it. 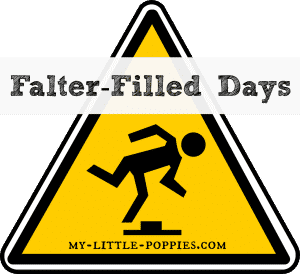 Let me pause here for a moment to provide some context.

We recently renovated our kitchen, and the new kitchen has a pantry. In our old kitchen, food was jammed into any available nook and cranny, or stored in the basement. Now, the food is all right there, in front of your eyes. It’s fantastic. And, apparently,  fantastically irresistible for 7-year-old boys. During a two-week span in April, I found quite a bit of loot in Leo’s bedroom, including:

Granola bar wrappers stuffed in his bookcase and underwear drawer.

Empty applesauce containers underneath his bed.

Two packs of chewed gum and balled up wrappers… everywhere. I am still unearthing them.

Our formerly failure to thrive child was stealing food and binge-eating, and he was doing a pretty horrendous job destroying the evidence. What did I do? I pulled him aside and told him to cut it out. We’re already on the quarterly pest package here in good ol’ NH without snacks in upstairs bedrooms. If he needed a snack, he could ask for one.

And, do you know what Leo did? He lied to me about it. He swore up and down that he had never taken food from our pantry, even as I was scraping gum off of his bed post, lampshade, and window sill. It’s one thing to chew two entire packs of gum and distribute both gum and wrappers all over your bedroom, it’s another thing to claim you don’t know how all that gum got there. Did it fall from the sky? Was I supposed to believe it was a set-up of sorts? Folks, I do not know.

I’ll be honest here: I found the lying to be infuriating. I am a horrific liar, even the most benign of white lies eats me up inside. How could he lie so suddenly, so blatantly, and so badly?

The pantry theft and subsequent lying carried on for two painful weeks in April and then, just as all things do, it passed.

Or so we thought.

Cut to the week of Memorial Day. Schizz was working like a dog and the weather was incredible, so I decided to take the kids on an impromptu vacation up north.

I opened my bleary eyes to see silhouette-Leo standing before me.

This was a falter, folks. Leo has always liked to save the BIG questions for the darkest of hours. I’ll be the first to admit that this is my worst time of day. Ask me about the fires of hell at five or six in the morning, when I’m bright-eyed and armed with a cup of coffee – I’ll be game then, I promise. Ask me at two or three in the morning and I’m not only cranky, but I can’t think clearly. I can’t answer BIG questions at two am, folks. I’ve tried and it never goes well. I honestly can’t recall how that first conversation went suffice it to say I was able to somehow comfort him and send him on his way.

The following day, I asked him if he’d like to talk what he had said early that morning and he shook his head and went on to have a wonderful day. I hoped it was a fluke.

But, the next morning, at 2:00 am, there he was again with BIG questions. And then again the following morning.

Over breakfast on the third day, I wondered aloud if there might be a reason behind Leo’s sudden fear of hell. I could see in his eyes that there was, but he was adamant that there was no cause.

And so I waited. What else could I do? I’ve known this guy for seven years and I’ve learned that it always comes out eventually. We enjoyed that day. Leo was happy, playful, fun. But, he appeared in my room again that night.

At this point, I should mention that Leo has been interested in the Bible, particularly the Old Testament, for years. He loves the magic of it all, and often compares the Old Testament to Greek Mythology, which he also adores.

That Old Testament God is a scary guy, folks. You don’t want to mess with him. In that moment, I knew why Leo was afraid. I felt for him, truly I did, but after several nights of lost sleep I could not coherently discuss lies and theft and the fires of hell at two in the morning. We had a bumbling conversation that left both of us feeling irritated. We retreated to our beds but I don’t think either of us slept well, if at all.

Then next morning, armed with my second strong cup of coffee, I brought it up. I confessed to Leo that I am the worst version of his mother at two in the morning. I told him that I wanted to comfort him, to ease his pain, but that I didn’t do it very well the night before. I apologized, and he offered forgiveness. Then, we had a wonderful conversation about honesty and guilt and faith and forgiveness. He seemed  happier, lighter.

That night was a visitor-free night. I assumed that it had passed.

Never assume, folks. Especially when it comes to kids.

A couple of days passed and then Leo started asking the BIG questions again. Thankfully, he asked them by the light of day, however, he chose the most inopportune times to broach the topic. Not that there is ever a convenient time to talk about the fires of hell, the existence of an afterlife, or faith in God, but he chose to ask these BIG questions:

When we were running late for an appointment and trying to get out the door.

When I was wiping his brother’s bottom.

When I was on the telephone with a business.

When I was dealing with a ceiling leak.

And I faltered once more. On these inconvenient occasions, occasions during which there was a lot going on, I was unable to hide my irritation with Leo. I answered quickly, snapped at him, or shot him a crotchety look while the phone was against my ear. The poor little kid had BIG worries and in his time of need I was crabby toward him.

Let me get back to that note. The note that highlighted my failure as a mom and concurrently demonstrated Leo’s remarkable emotional growth this year: 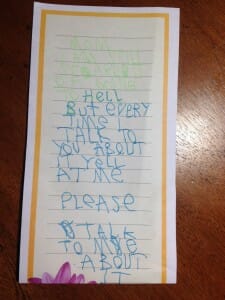 Nah, I don’t really expect you to read this, folks. It says: Mom, I am still scared of Hell but every time I ask you about it you yell at me. Please talk to me about it. Love, Leo

I felt like I had been slapped across the face. I had failed the poor little guy. He had big, scary questions and I failed him. I had faltered, big time.

And yet… what a note! Instead of throwing a tantrum, or lashing out at me, or stewing in anger, or bottling it up inside, he sat down and got his words on paper. He used one of the strategies we’ve suggested for years. He clearly wrote out what was bothering him and asked for help, and then he handed the note to me at a perfect moment- not a chaotic moment, but a quiet moment. He didn’t stick around for an answer, instead he walked away. He showed thoughtfulness, maturity, and patience. And it was a good thing because I needed a few minutes to compose myself.

I found him in his bedroom, snuggled up with Harry Potter. First, I hugged him. Then, I apologized to him. And then I told him how proud I was of him. Finally, we talked about some of his very BIG questions, and the worries associated with these questions.

I don’t think we answered any of the BIG questions- they are too big for answers. But I could tell that my little philosopher-theologian felt better in that moment. I knew that other questions would come, and they did, this time in the form of notes. I’m saving them all because I’m a hoarder of memories and moments. 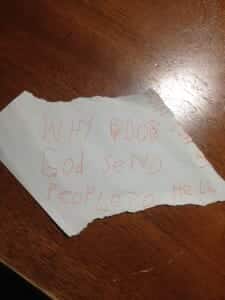 Why does God send people to Hell if He’s nice? 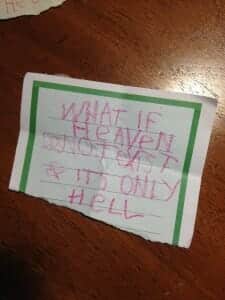 What if Heaven does not exist and it’s only Hell? 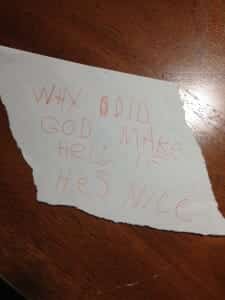 Why did God make Hell if he’s nice?

(I think these notes illustrate why going to church with this little fellow has always been an interesting experience!)

The other day, I shared my falter-filled days with a dear friend of mine. Turns out this friend of mine is good friends with a Catholic Brother who adores questions such as these. I asked Leo if he’d like to email his questions to Brother and Leo responded with an enthusiastic, “Yes!!”

It’s okay to ask for and accept help, folks. I feel like I’m going to be doing a lot of that over the coming years!

Here’s the thing… parenting is tough stuff. We all falter. Some days, we falter more than others. Share your falters with others so that you can learn, and so that others can help you. And, I’m learning that on these falter-filled occasions, as if so often the case, it’s best to just slow down. Pause. Stop to really listen. Take the time to have a difficult conversation at an inopportune time. All that other stuff can wait.

Now, it’s your turn. Tell me, folks… how have you faltered lately?

Why don’t we open up
Knowing that we all falter
When will we learn – to reach out for each other?