Today, I am sharing the best escape room board games.

My youngest loves escape rooms, so much so that he requested an escape room instead of a birthday party one year. There’s something extraordinary about being “trapped” in a room with a bunch of your favorite humans, and working together to escape captivity. And while in-person escape rooms are a worthwhile experience, they aren’t something you can do every day. That’s why I want to share the very best escape room board games for your next family night in!

The 40 Best Escape Room Board Games 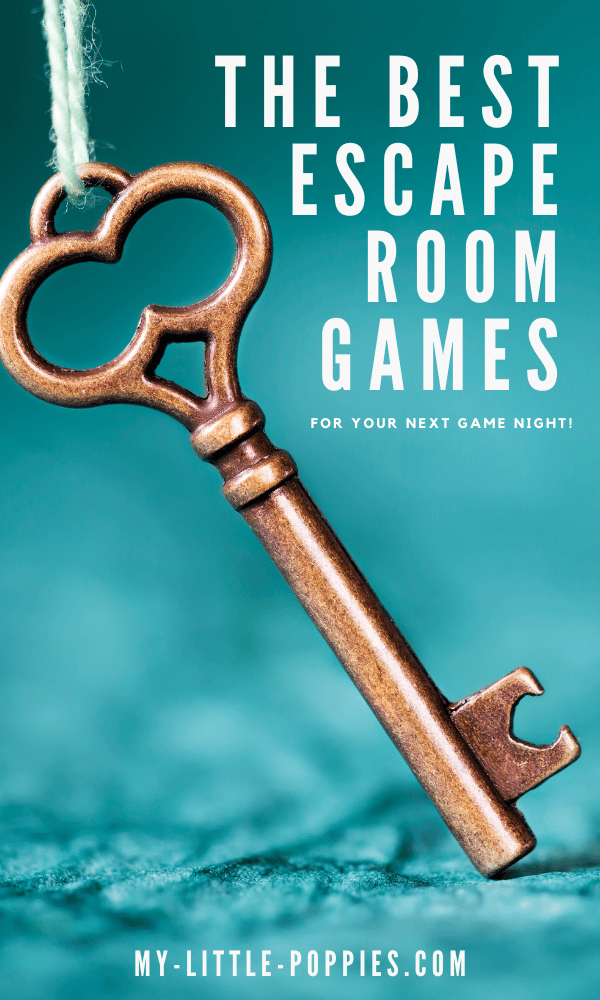 Why Escape Rooms Are So Popular

Escape rooms are all the rage right now, and with good reason.

Let’s start with the obvious. They are fun! Escape rooms are a type of game and games are fun. Play is good for our bodies, minds, and souls.

Escape Rooms challenge our minds and encourage us to think creatively.

Escape rooms help us to connect and collaborate with others.

Escape rooms work well for friends and families, and team-building among colleagues. When we participate in an escape room with others, we are connecting, collaborating, and making memories.

Escape rooms allow us to enter another world for a while. We can escape from daily life and its stressors and get lost in an engaging experience with others. 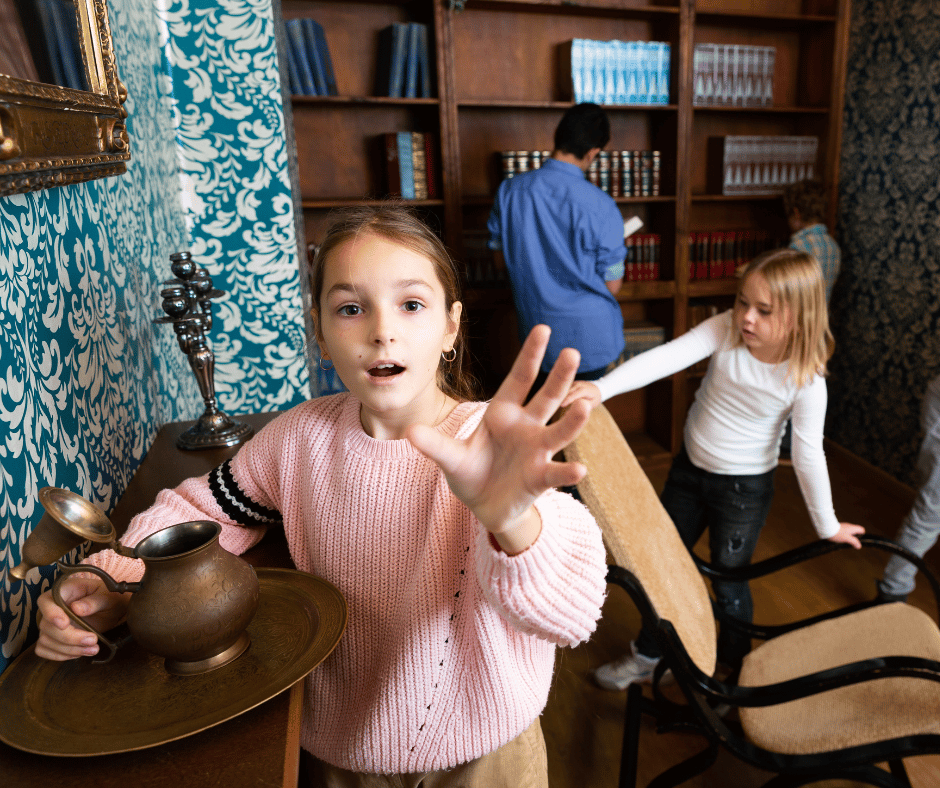 Escape Rooms From Your Own Home

You might be wondering whether escape rooms translate well into a board game format. I think they do, especially if you research the game to make sure it is a good fit for your group and if you set the stage for success. What do I mean by that? Well, if you go to an in-person escape room outside of your home you will notice that it feels like you enter a different world. You can make your escape room come to life, too!

Do you want to make your escape room come to life? Here are some factors to consider: 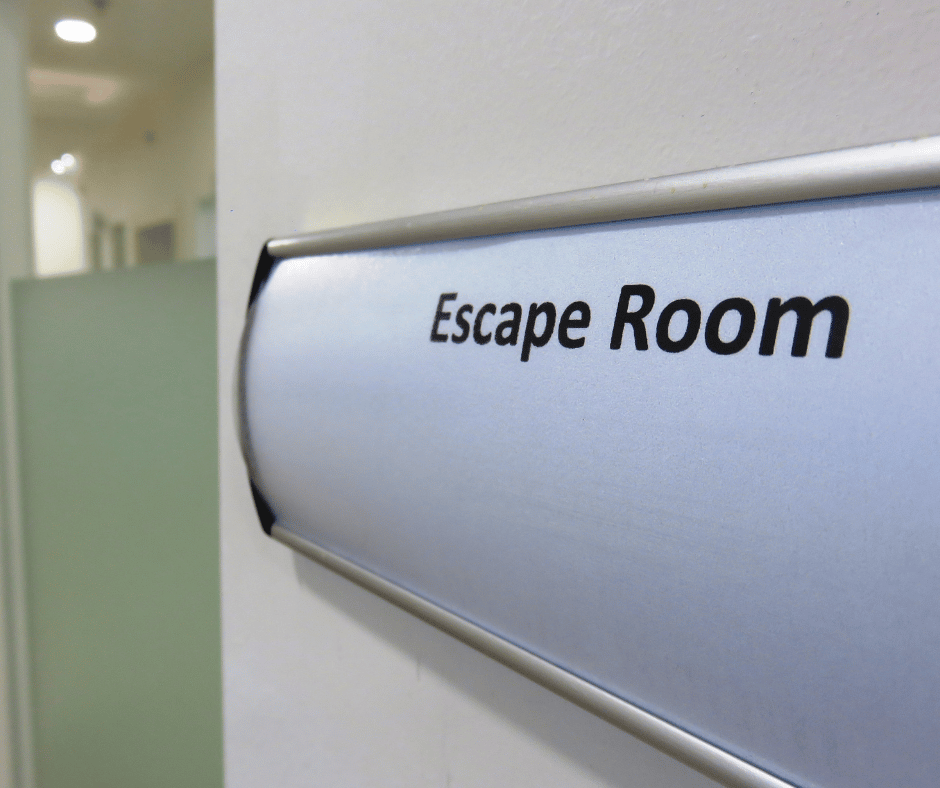 How to Choose the Best Escape Room Game

There are some considerations to keep in mind when choosing an escape room board game for your next game night. 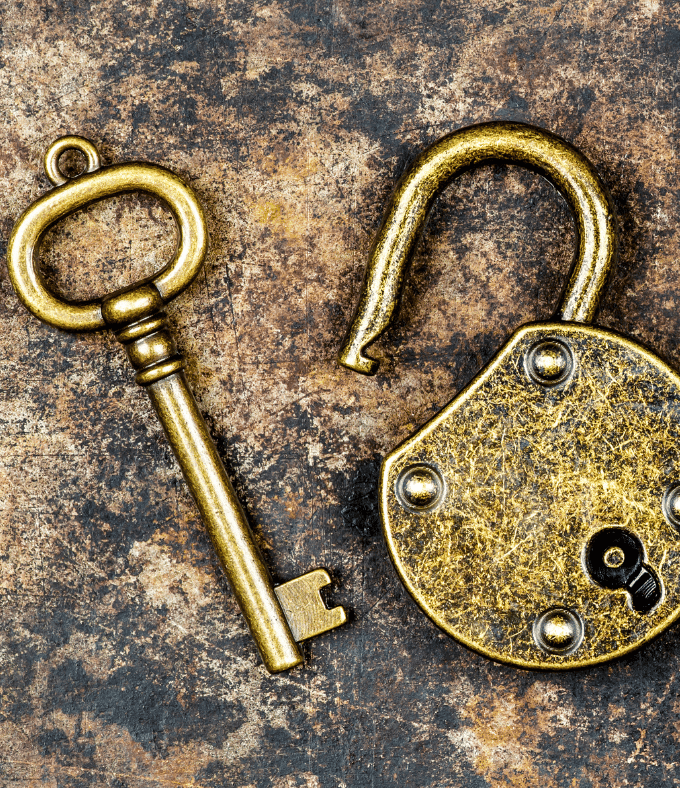 The 40 Best Escape Room Board Games

As promised, here are the best escape room board games. Be sure to keep reading because, later in this article, I am sharing the best mystery games. If you love escape room games, you’re going to love these!

Goonies never say die! Yes, it’s true. There is an escape room board game for Goonies fans! Coded Chronicles: Escape with One-Eyed Willy’s Rich Stuff will take you to Astoria, Oregon where you, Mikey, Brand, Mouth, Data, Chunk, Sloth, Andy, and Stef will search for One-Eyed Willy’s treasure. Watch out for the Fratellis!

I am starting with some escape room games that are full of nostalgia. Random fun fact about Cait: I didn’t love the show Scooby-Doo, but we had a Scooby-Doo kiddie pool back in the ’80s and I loved that thing. I loved it so much, I can still smell what it smelled like when it was a hot summer day and you were waiting for the hose to fill ‘er up.

Scooby-Doo: Escape The Haunted Mansion is a game for 1-99 players. In this game, players work together to solve the mystery of Lady Fairmont’s ghost. Together, players solve over 50 clues and escape from the haunted mansion.

The Shining: Escape from the Overlook Hotel [Coded Chronicles] 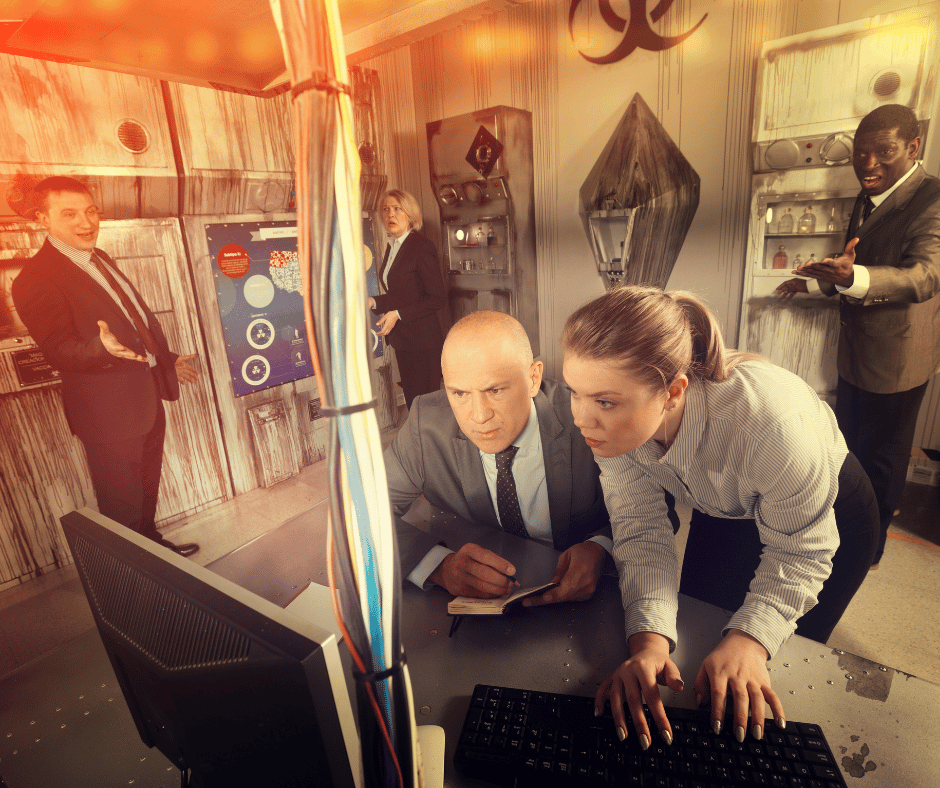 Our family has enjoyed ThinkFun games for many years. ThinkFun Escape The Room games work well for families as they are not super complex compared to many other games in this genre. We have thoroughly enjoyed every escape room game in their series, especially Cursed Dollhouse, which we played during Halloween week of last year.

Stargazer’s Manor is a game for 3-8 players set in the year 1869. The town’s local astronomer’s wife recently passed away and he has not been seen since her death. Players must work to unravel the mystery of Stargazer’s Manor before the clock runs out.

Cursed Dollhouse is a really neat game because players construct a three-dimensional dollhouse to use during play and from which they must escape. This game is for 1-4 players and is designed for the more advanced escape room enthusiasts and playtime is between 2-3 hours. 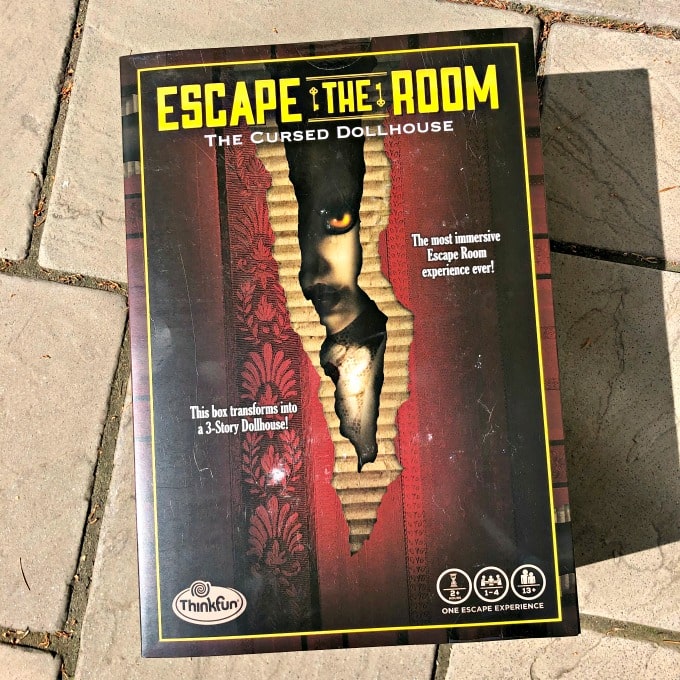 Murder in the Mafia

This year, we added Murder in the Mafia to our collection. This cooperative escape room game is for 1-3 players. Mikey Malone, the chief enforcer of the local mafia, has been murdered. Who committed the crime? Players must explore the crime scene, find clues, and solve puzzles to prove their innocence. 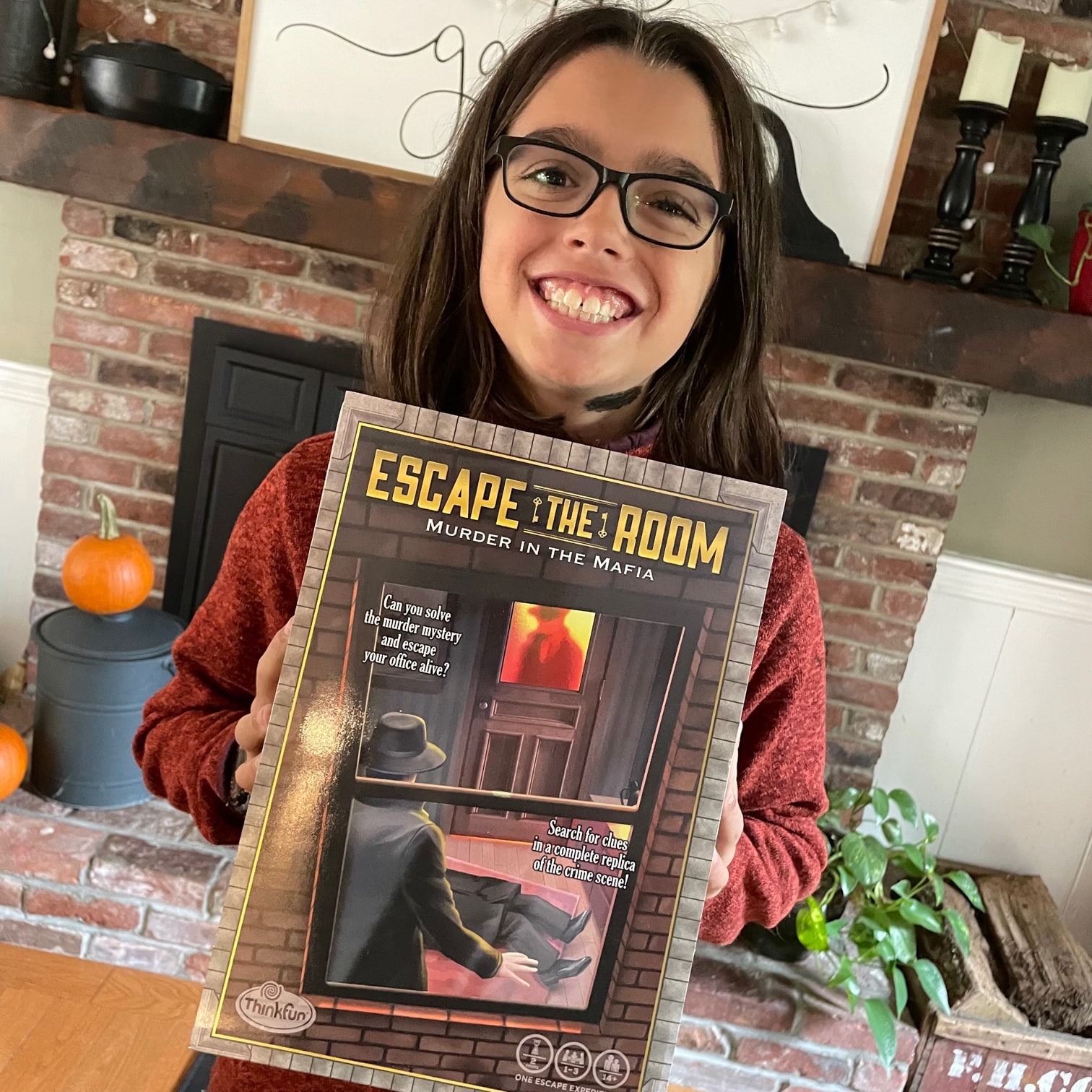 Escape Room in a Box (Series)

This is a great escape room series with interesting components. In addition, you can enable Alexa as the host to increase the experience.

Escape Room in a Box: The Walking Dead

Escape Room in a Box: Flashback

Escape Room in a Box: Flashback is designed for 2-8 players and, unlike many escape room games, can be played up to three times. In this game, players are working together to escape a mad scientist werewolf.

This series offers escape rooms in the following areas: family, puzzle adventures, 2-players, and original. There are also expansion packs available. The components included are excellent.

designed for 3-5 players and contains three different one-hour escape room games: The Present, The Past, and The Future.

Escape Room in a Box: The Werewolf Experiment

Escape Room in a Box: The Werewolf Experiment is designed for 3-8 players. In this game, players must solve nineteen puzzles within an hour, or a mad scientist will turn them into werewolves! 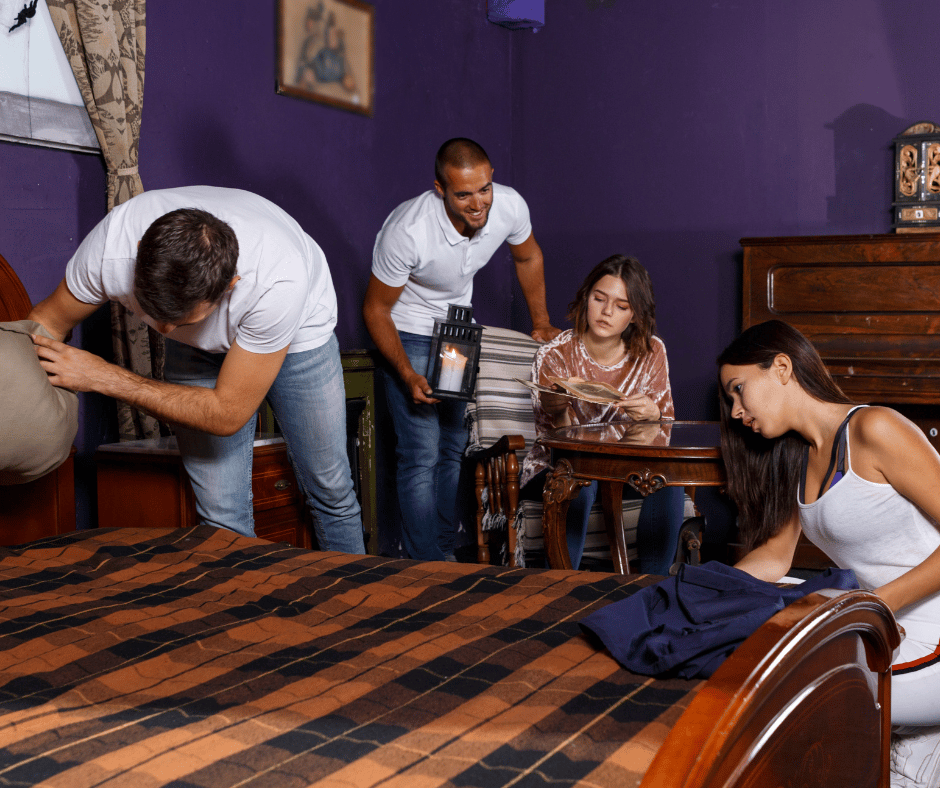 Deckscape: Behind the Curtain

Deckscape: Behind the Curtain is designed for 1-6 players. The game takes place at a magic show, but an unexpected thing happens and players must work to escape the magic through puzzles.

Deckscape: Test Time is designed for 1-6 players. In this game, players have been selected by their teacher, Dr. Thyme, to participate in a special project. If players are successful, they can help him with his next invention.

Escape from Iron Gate is designed for 3-8 players. In this game, players have been wrongfully accused of crimes and must escape from prison before time runs out.

Escape Tales: The Awakening is designed for 2-4 players. In this game, players take on the role of Sam. Sam’s otherwise healthy daughter is in a coma and medical doctors cannot explain why. In desperation, Sam finds Mark, who had a similar situation years ago. Mark gives Sam a creepy book called The Awakening. And that’s where it gets interesting!

Escape Tales: Low Memory is designed for 1-4 players. As in the previously mentioned game, this one is big on the storyline. In addition, this game has three stories with one plot, so players can experience the story from three different perspectives.

Escape Tales: Children of Wyrmwoods is a game for 1-4 players. This dark, fantasy game has a twisty storyline filled with plot twists, evil, and challenging decisions. 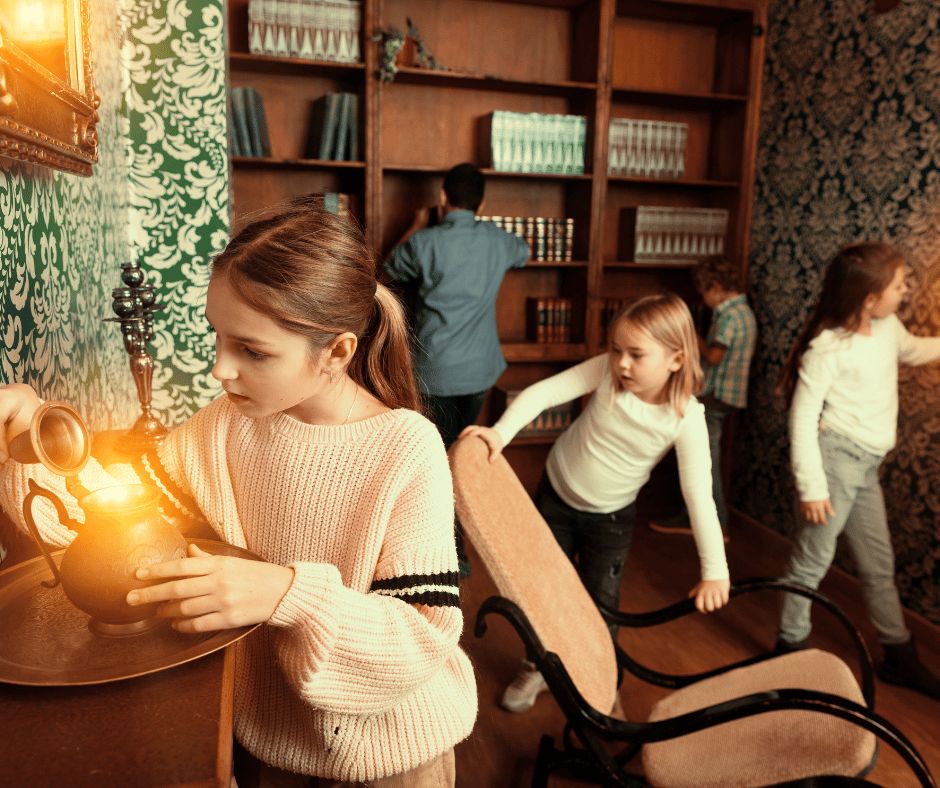 This series of Escape Room games is perhaps the easiest to start with. You can open and go without much prep. In addition, there are a ton of games to choose from in the series, with more added all the time. And I find the puzzles to be engaging in this series.

Exit: The Abandoned Cabin is possibly the most popular game in the Exit series. It has a follow-up version called Exit: The Return to the Abandoned Cabin, which my kids want to play! This game is for 1-4 players. In this game, players discover an abandoned cabin after their car breaks down one night. When they wake up, the door to the cabin is locked and players must work together to get out!

Exit: The Pharoh’s Tomb is designed for 1-4 players. In this game, players are vacationing in Egypt. While exploring a tomb, a giant boulder door closes, trapping the players. Players must work together to escape from the tomb. 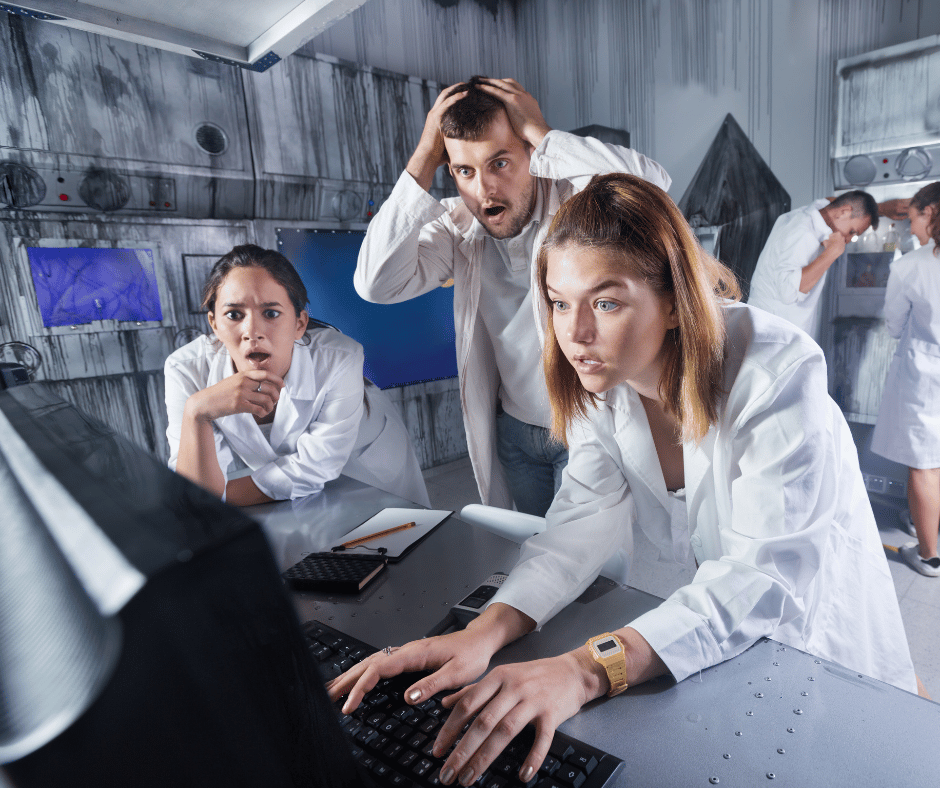 The Unlock! series stands out because you can reuse the games. You can’t play them again because you’ll know all of the answers, but you can pass them along to friends. Bonus: the artwork is stellar. Unlock! also offers a companion app.

Unlock! Escape Adventures is designed for 1-6 players. This game includes three different scenarios for you to play your way through:

Unlock! Mystery Adventures is designed for 1-6 players and includes the following three scenarios: 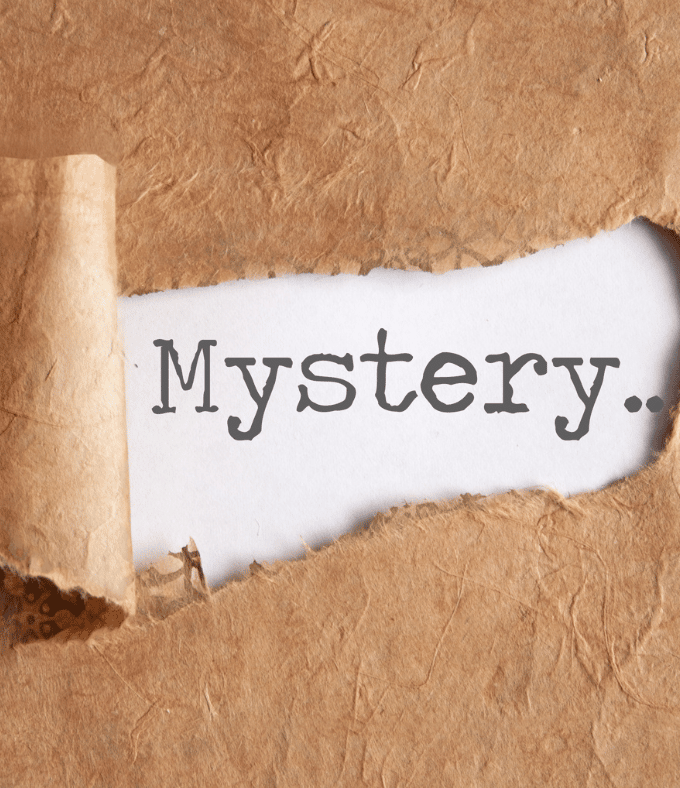 If You Love Escape Room Board Games, You’ll Love These Mystery Games

I’m guessing that if you love escape room games, you’ll adore the following mystery games. In no particular order, here they are!

Hunt a Killer: Death at the Dive Bar

Hunt a Killer: Death at the Dive Bar is a murder mystery experience for 1-6 players. Each player is an investigator working to discover who killed the owner of a local dive bar. Piece together clues, interview suspects, and crack codes to find the killer.

Echoes is a series of audio mystery games (so unique!) that require one player to download a free app to play. Games are for 1-6 players. In Echoes: The Microchip, players must listen to the audio (via the aforementioned app) and discover all the audio clues, working together to solve the mystery. Other games in the series include: 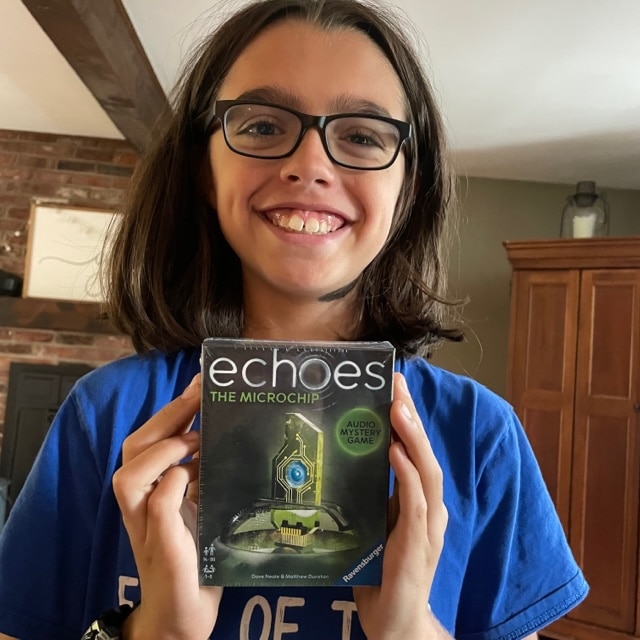 Our family has loved these Cold Case mystery games from ThinkFun. This series is a set of cooperative mystery games for 1-4 players. In the past we have played (and enjoyed) the following:

This year, we added Murder with Interest to our gameschool collection. This cold case takes place in Ireland, where Dave Connelly celebrated his 25th birthday… but it was his last birthday. Together, players must solve this cold case. Who poisoned Dave and his bank manager? (We haven’t played it yet; we are waiting until it gets closer to Halloween!) 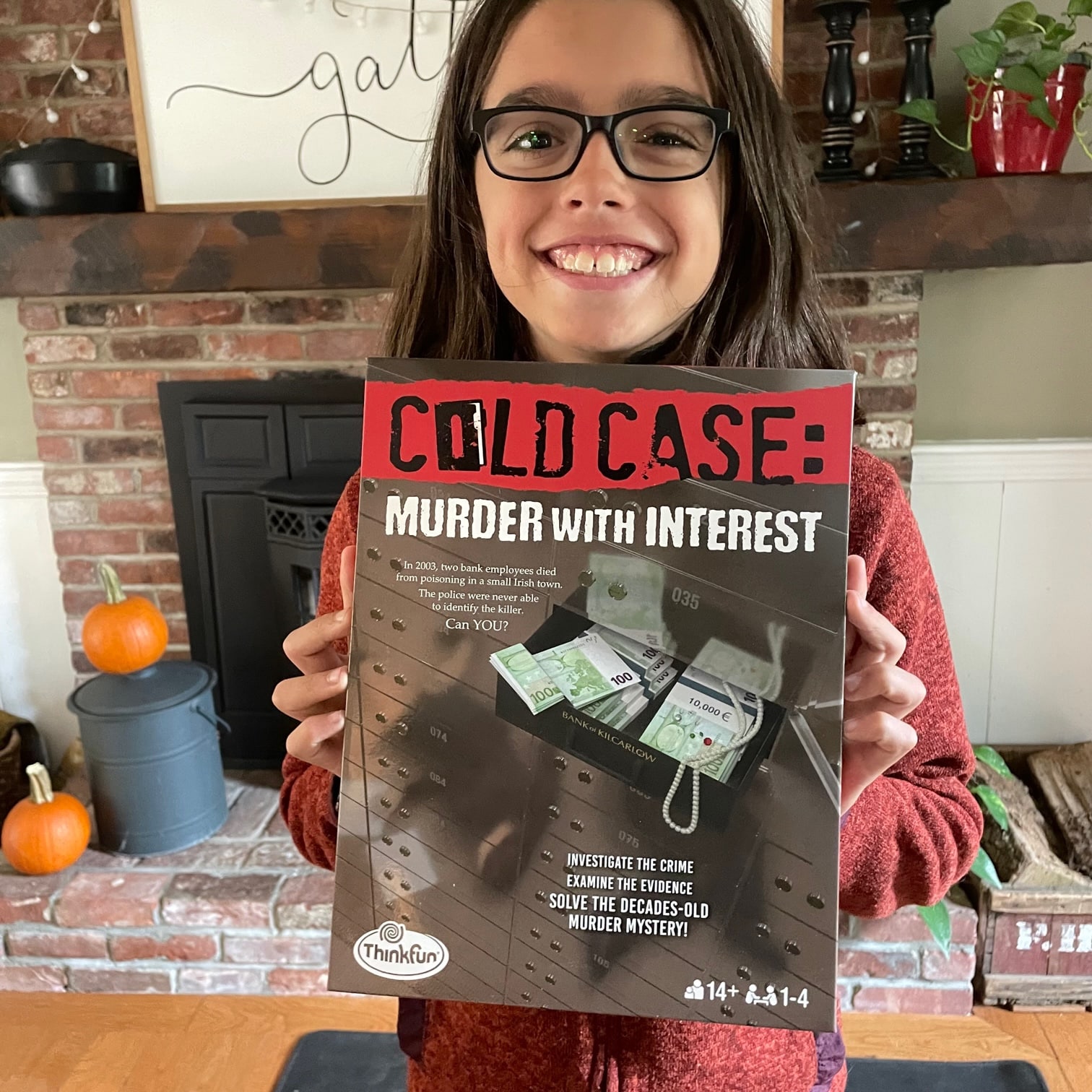 More Board Games For The Whole Family

If you’re looking for more excellent game recommendations, check out the following articles:

Now, It’s YOUR Turn. Tell Us: What is Your Family’s Favorite Escape Room Board Game or Mystery Game? Share here!