Today, I want to chat about educating gifted children and learning to let go.

But first, the backstory…

When my oldest was struggling in kindergarten, we scrambled to find an answer. We searched for missing pieces that, once in place, would make everything… easier. After a few months in public school, our curious little guy’s smile had disappeared and we wanted our joyful learner back.

We talked to the school, of course, but we did not feel heard. In my gut, I knew they viewed me as That Parent. Our conversations included lots of head nodding and tight smiles. And this sort of thing:

Well Mrs. Curley, he might be reading Harry Potter, but he certainly isn’t comprehending it. Fluency comes before comprehension as I’m sure you know!

These statements only proved how misunderstood our little guy was, as anyone who knows him in real life knows that there is absolutely no way he would spend an hour with a book he didn’t understand. He’s just too busy! He’s the most active reader I’ve ever met!

Not surprisingly, this need to be busy carried over into the public school setting, as we started receiving behavior slips. Nothing too horrendous, just nuisance behaviors: doodling on a neighbor’s paper, calling out of turn, smuggling in a paperclip collection to play with during class, singing the Frozen soundtrack in reverse order.

But you can’t say the B-word aloud to the folks who have already crowned you That Parent. Why? Because the B-word implies the G-word and that, in their minds, only confirms your That Parent status.

So we talked around these words. I knew these behaviors would go away if they gave him a book he’s never seen before. The child cannot resist a novel book. I told them this, and not for the first time. I reminded them that he always had a book in his bag because he read it on the bus. They didn’t even have to find a book- they could give him his own. 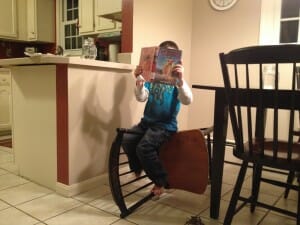 Again, I got that tight smile and head nod and nothing happened.

Ultimately we decided to have him assessed. Perhaps, when faced with a black and white score, the school would listen to our concerns. That B-word and G-word would be confirmed, so to speak. We hoped testing was one of the missing pieces needed to make things work and restore his joy.

I had spent the entire first part of his kindergarten year reading everything I could get my hands on about gifted and twice-exceptional learners. As a school psychologist, I felt like I should know where his scores would fall. But the thing is, when you are so deeply in it, it’s sometimes hard to see the whole picture. Our guts were screaming at us that he was an outlier, but I couldn’t quite wrap my brain around what that would mean for us, educationally. So I read and read and read.

I never imagined myself homeschooling. My husband and I were both products of public education and I had worked in schools for years before having my children. Whenever homeschooling came up in the literature, I entertained the thought for a moment or two. And then I would think to myself, “He’s probably not that gifted.”

Well, as it turns out, he is that gifted. On the morning of testing, during one of my son’s many movement breaks, the psychologist informed me that my just-turned-6-year-old was hitting every ceiling on the test. She advised me to start researching the Davidson Young Scholars Program. “I know without even scoring that he’s going to qualify,” she added before heading back to the testing room with my son.

Her words were one of those missing pieces. They confirmed what our guts had been screaming at us all along: our son was an outlier among outliers. I knew, right then and there, that things needed to change drastically. The school would either need to ante up, and fast, or we would homeschool. 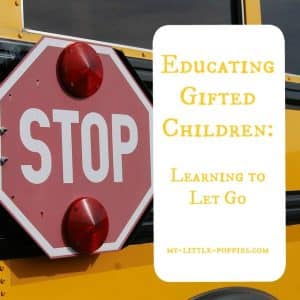 Overwhelmed, I retreated to my car. I put my head on my steering wheel and cried. As I cried, I thought of how I had imagined my son’s elementary school experience, all of those public school things from bus rides to field trips to recess to spirit day. It was as if his little preconceived elementary school life passed before my bleary eyes.

Homeschooling was so foreign to me. I had no idea what it would look like. When I tried to picture us homeschooling, my mind drew a complete blank. I decided not to worry about it just yet. I would wait for the report and see what happened at the meeting. Quickly, I dried my tears, took a deep breath, and waited.

A few weeks later, we had the results. Our kindergartener scored above the 99.9th percentile on cognitive measures with academic skills two to six years above his current grade placement. The psychologist who had assessed our son strongly advised us to homeschool.

But the thought of homeschooling a profoundly gifted child scared the absolute crap out of me. I told her this, and her response has stuck with me to this day:

Try not to think more than six months or a year ahead. You just can’t with these kids, or you’ll drive yourself crazy.

Later, she added that we would need to “let go” of what we had imagined schooling to look like. In other words, we needed to shake off that public school mindset.

Still, the school psychologist and public educator in me wanted to give the school a chance. I knew, before entering the meeting, that educating a child like this in a K-3 building would be a challenge, but I wanted to see what they would say.

I’ve talked about our terrible, horrible, no-good, very bad meeting here before. I’m not going to rehash the whole thing. In a nutshell: it went badly. At one point, when I asked the school psychologist point-blank how the K-3 school would meet his academic needs when some of them were at a 6th-grade level, she replied:

We’ll just have someone walk down from the upper elementary with a book.

That was another missing piece right there. Even though the thought of homeschooling scared the holy hell out of me, I knew without a doubt that I could do better than someone with a book.

And so we started homeschooling. 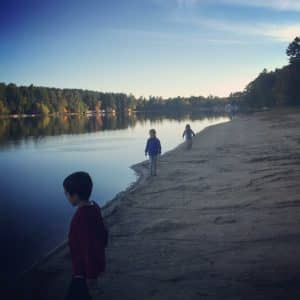 At first, it was overwhelming, but the change was immediate. My son’s smile was restored because homeschooling allowed him the freedom to be himself. Eventually, we got into a rhythm as I learned that learning happens all the time when you relax and let it. Don’t get me wrong, we have had heaps of hard days, but even the ugliest of days are better than our days in public school.

The first year was an evolution of sorts but we haven’t looked back.

In fact, we’ve recently added another homeschooler to our fold.

I wouldn’t change any of this for the world. Two years ago, I couldn’t imagine myself here, and now I can’t imagine us anywhere else. Life is funny.

If you’d like to read more about how we homeschool, check out this post about our curriculum choices. And, if you want to see what a homeschool day in the life looks like over here, be sure to check us out on Simple Homeschool next week!

This post has been part of the January 2016 GHF Blog Hop Educating Gifted Children: The Many Ways We Approach Their Learning. Please click the image below to keep on hoppin’! 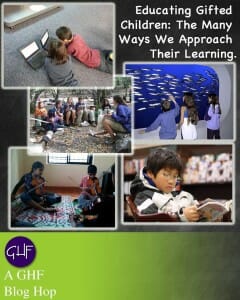