Today, I am going to share with you how to make a DIY Talking Spoon, a tool that helps with teaching children table manners.

Folks, I’d like to introduce you to the Talking Spoon: 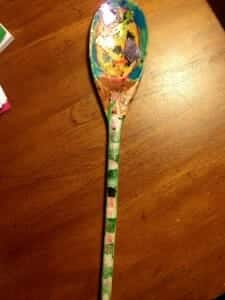 Are you sitting there thinking to yourself, “What the heck is that?!”

Well, it’s none other than our family’s beloved Talking Spoon. A few years ago, we were having quite a bit of drama at dinner. You see, my husband works a lot and so when he’s actually home and seated at the dinner table, my little poppies are overjoyed and they basically explode with stories and questions and jokes and songs. And they share it all at once, yelling over one another and creating a wild rumpus of sorts. Our family dinner was essentially a shouting match. It had to stop. 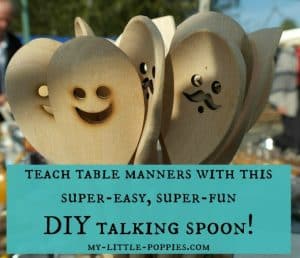 Then one night, I awoke with a memory-fueled idea (Hellllo, insomnia!). I remembered this fantastic teacher who I had the pleasure of working with ages ago when I volunteered with Jumpstart at a Head Start in Boston’s Chinatown. This teacher had a similar situation during circle time and she wanted to teach her students how to take turns speaking and resist the impulse to interrupt one another. To teach this in a way that young children could understand, she had a Talking Stick. The student who was holding the Talking Stick had the floor. All of the other students’ eyes were to be on the person holding the Talking Stick. When that student was finished speaking, he or she would pass the Talking Stick to a friend and that student would then have a turn. Such a simple idea and I know a lot of preschool teachers out there are familiar with this classroom management strategy because I’ve seen it implemented in various ways since that first time, many years ago.

Until that night, I hadn’t thought to use the Talking Stick while parenting. So the next morning, I gathered my little poppies, an old wooden spoon (because adding a stick to our already out of control dinner was just asking for trouble- a spoon seemed more appropriate), and a bunch of art materials and we got to work on a Talking Spoon craft-palooza.

When our Talking Spoon was dry, we tested it out. Folks, it worked! Our meals became more peaceful and our children learned to [mostly] take turns speaking, and they were also more attentive when someone was holding the Talking Spoon. I have shared this parenting hack with friends who have had similar success.

The Talking Spoon has helped so much that it has been months since we used it. It’s been sitting on a shelf in our kitchen, collecting dust… until this week. Christmas is almost here, the energy his high, and the listening is poor. I dusted off my trusty ol’ Talking Spoon this week and my little poppies knew just what to do. Peace restored! Well, mostly restored… and that’s the best one can hope for with Santa Claus on the horizon! 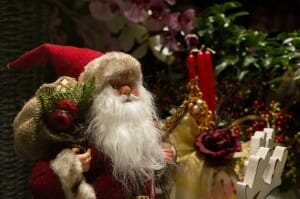 People who say it cannot be done should not interrupt those who are doing it.