The terrible twos are such a joke! Two-year-olds are cute. They are curious about the world and they like to explore it all the time. Honestly, I enjoyed the two year old phase three different times now. I sort of love that age.

But three…now three is a challenge, and I say this as someone who has survived it twice and is in the throes right now. Parenting a three year old is tough stuff, folks!

I honestly thought I was going to escape the threes with Seuss. He’s a happy-go-lucky guy. He’s ever-the-charmer. He’s funny. Even when he’s being a rascal, he makes you laugh. It’s tough to complain about someone who makes you laugh all day long. He might be three, but he’s still the Ambassador of Joy after all!

Well, last week it happened. Seuss, who turned three in early September, started behaving like a three. And remember how I told you guys that he has a vivid imagination and will get lost in imaginary worlds and morph into various characters? Imaginational OEs and all that stuff? 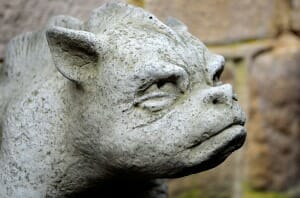 Last week, Seuss morphed into the “Danger Monster” for the first time. He morphed loudly and wildly. The first time the Danger Monster appeared, we were in a store. A quiet store with no other children present. I assumed it was a one-time thing.

Folks, I’ve loved this kid’s other characters. I regularly include his daughter, “Daughette”, in our conversation and daily events. I love the Big Bad Whoopie. I adore when Seuss dresses like Batman or a fairy or Queen Elsa or a fire fighter. I play along with it all day long. His imagination is both fascinating and adorable.

But, I don’t know how much longer I can tolerate this Danger Monster character. He’s wildly embarrassing, even if I do have to stifle a giggle.

Tonight I tried to capture the Danger Monster on film for you guys. The thing is, that Danger Monster  is elusive. He moves wildly and he’s very fast. This is the best I could do:

So, tell me, what has been your least favorite age? What are some shenanigans your three year old has pulled?

Everything you can imagine is real.