Do your kids have an adorable tradition of their own invention? My kids have this ridiculously cute thing that they do together every single day, and sometimes multiple times daily. It’s called a snuggle party. 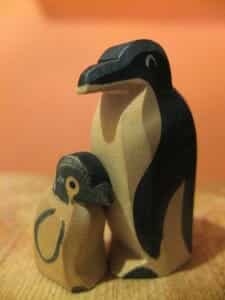 This is how it all goes down… My children will be engaged in some activity when all of a sudden one child will interrupt the activity with a top-volume announcement: “Guys! Let’s have a snuggle party!”

Without fail, the other two children will jump up and down and shout, “YES!!!” Then the three take off running, upstairs, and into the bedroom of the child who announced the snuggle party. Because, obviously, that kid is the host.

Even though this announcement is made at least once a day the kids are always excited. This adorable kid tradition has been happening daily for years. I know I’m biased as their mom, but I think it’s the cutest thing ever.

So what happens at a snuggle party, you wonder? Typically they each gather their comfort object, a pillow, and a sleeping bag. Then they work together to “make a nest” on the snuggle-party-host’s bed. Once cozy, Leo will often read aloud, sometimes they read together silently, sometimes they draw, and other times they chat amongst themselves. Once in a blue moon, there is mischief. I’m rarely invited, it’s typically a kids-only event.

But every once in a while, I’ll receive an invitation. And on those days you can bet that I run up those stairs, too. I know these snuggle parties won’t last forever. 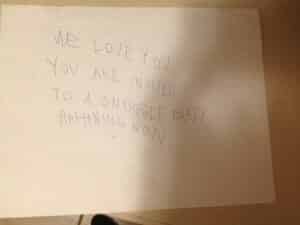 We love you. You are invited to a snuggle party happining [sic] now.
What adorable kid traditions happen at your place? I’d love to hear from you. Share the cuteness here!