A couple weeks ago, I took the kids up north for a little rest and relaxation. We spent the first several days playing in the river and pool and enjoying heaps of poolside games.

RELATED: Gameschooling: The Best Card Games for Your Homeschool!

And then we had two extremely rainy days to contend with. My kids were tired of playing the games I keep in my pool bag, and the game closet was filled with games that were either too old for my little crew or ones that they had long since outgrown. I decided to head to the nearby 5 and 10 store to pick up a few new games for my parents’ game closet. 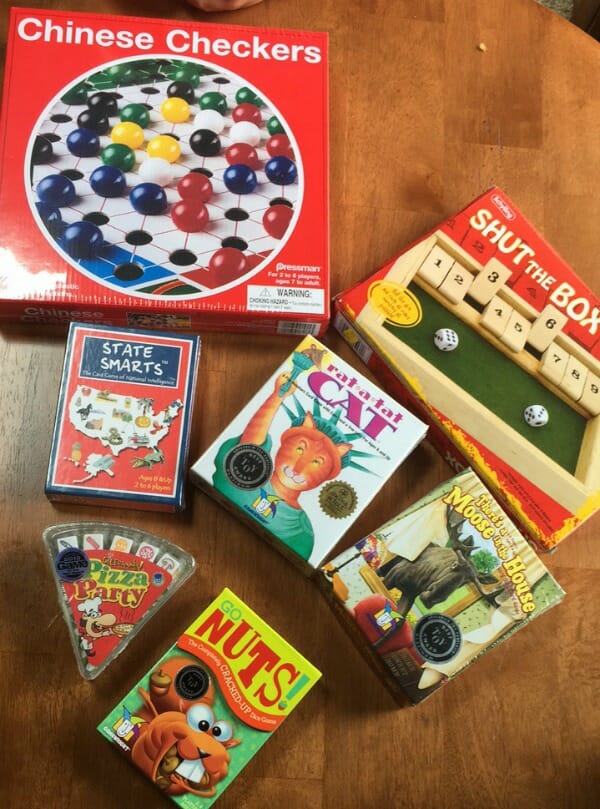 Hi! My name is Cait and I am addicted to games.

What fun we had!! And it started us on a new kick: card games! We had enjoyed card games in the past. My kids love to while away a rainy afternoon playing War or Go Fish, but this started a card game phase. In fact, I shuffled so much those first few days that my thumbs actually hurt. I kid you not! I’ve since toughened up and today I’m sharing some of our recent favorite family-friendly card games!

I don’t know about you guys, but Monopoly causes my kids to fight. We just cannot play it successfully. Plus, it’s a commitment to take out Monopoly. The game can last days! Enter Monopoly Deal, the fast-playing card game version of the classic game.  You can collect properties, swap, steal, and charge other players. It’s all the fun of the classic game in a fast-playing, 15-minutes top format.

Phase 10 is a rummy-style card game where players compete to see who can complete phases first. A phase is a combination of cards: sets, runs, cards of the same color, or a combination. The deck includes wild cards and skip cards for added fun. Players must complete one phase to advance to the next phase. The first player to complete all ten phases wins the game. 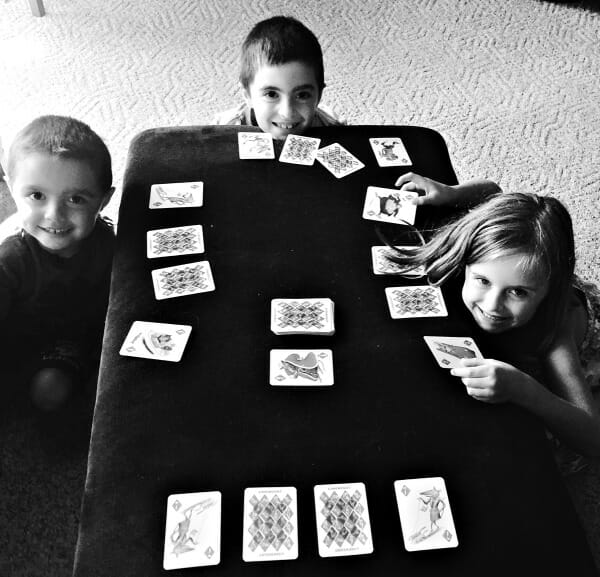 My trio, enjoying a game of Rat a Tat Cat

Rat a Tat Cat is one of the games we purchased while up north. We have been playing it nonstop, as you can see in the above photo. The game has won a number of awards. It’s an easy-to-learn card game that works on math, memory, and strategy. The goal is to get rid of your high cards (the rats) and replace them with the low cards (the cats). The player with the lowest score wins the game

I loved this game as a kid! It’s sort of like solitaire, but for a group. The goal is to get rid of each of your cards in numerical order from 1-12. It sounds easy, right? Well, it’s more complicated than that. Play involves several piles: draw pile, building piles, stockpiles, and discard piles. In addition to trying to get rid of your cards, you must pay attention to what your opponents are doing! Skip-Bo cards act as wild cards for added fun. It’s a great game for teaching sequencing and strategy.

Sleeping Queens has been a new obsession over here! My kids are in love with it! Sleeping Queens was created by a 6-year-old, which makes it even more special. It’s a fun game where you must “wake up” Queens who have fallen asleep under a spell. The cards are beautiful and feature quirky characters such as the Pancake Queen and Ladybug Queen. The object of Sleeping Queens is to be the first player to “wake up” (read: collect) a certain number of Queens or a certain number of points. These values change depending on the number of players in the game. But there’s more to it than that: there are potions and knights and dragons involved, too!

It is a simple, easy to learn game that all ages can enjoy. The neat thing about this deck of cards is that any two cards have one, and only one, match. Each card has colorful objects and words on it, in various sizes. In this game, you have to be the first to spot it. Everyone is playing at once so it’s fun and fast and crazy. The winner is the person with the most cards at the end. We have been playing the waterproof version all summer long!

As a sushi addict, I had to try this game! I love the cards- the graphics are fantastic. In this fast-paced game, the goal is to pick the best combination of sushi. Play involves selecting cards and then passing your hand to the player next to you. Cards have point values and many interact with each other. For example, dip a nigiri in wasabi and you get three times the points! The game is a great introduction to strategy, probability, and quick-thinking! 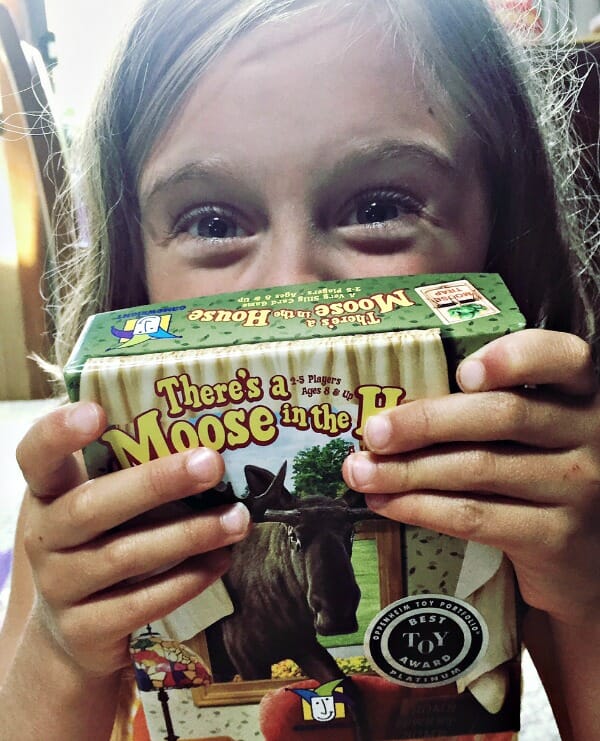 This is the deck that hurt my thumbs, folks!

There’s a Moose in the House

This is the game that hurt my thumbs when we were up north! We have played so many times that the deck looks like we’ve had it for years, rather than just a couple of weeks. In this fantastically quirky card game, the goal is to keep moose out of your house while putting them in your opponents’ houses. The cards are hysterical and the game brings about raucous belly laughter from your kiddos. It’s an easy to learn, fast to play card game that will result in giggles. The player with the fewest moose in his or her house wins.

UNO is everyone’s favorite card game! I’ve never met a kid who didn’t love it. The goal is to be the first player to get rid of your hand by matching colors or numbers. Wild cards, skips, reverse cards, and draw cards are included for added fun. This is a great game to keep in your purse for restaurants and waiting rooms. This year, we discovered the waterproof version and have been playing poolside all summer long! It is the perfect classic game!

…. and while not technically card games, these are the same size. Here are two dice games for families:

This dice game is like Yahtzee meets acorns and squirrels and kids love it. It is fast to play and tons of fun. To play, roll your dice quickly and add up as many points (read: acorns) as you can before your opponent rolls a dog (which chases your squirrel away). The player with the most points wins the game.

This is a speedy two-player dice game. Take out a slice card and quickly roll your dice. Match the images on your slice. When you “fill” a slice, grab another one. The first player to complete an entire pizza wins the game! You can watch my boys play it here:

This post has been part of a 5-day iHomeschool Network hopscotch. Please click the image below to see the other posts in this series: 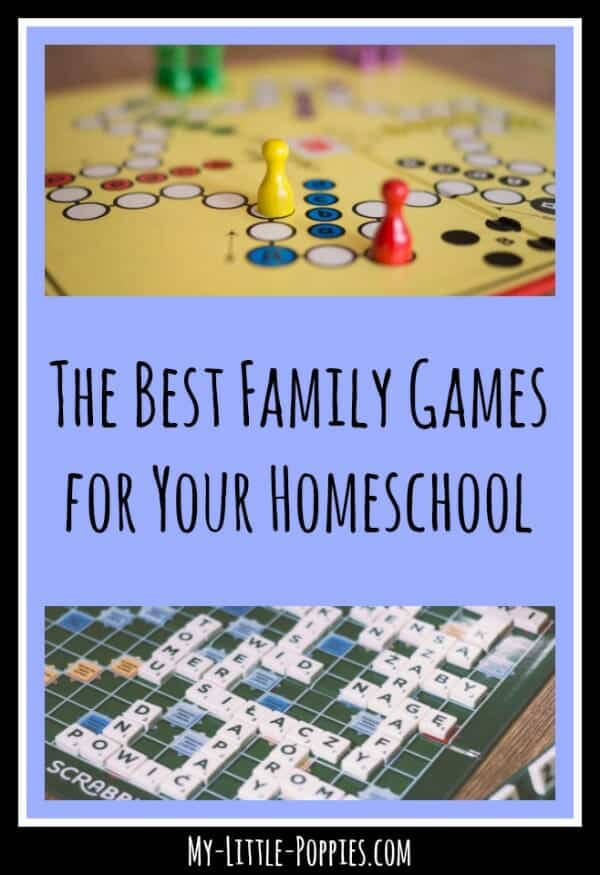 Do you love Gameschooling?

I rely heavily on educational games in our homeschool. Read more here:

Now, it’s your turn. Tell me: What is your family’s favorite card game? Share here!